This Day In History: November 8

On this day in history, November 8th… 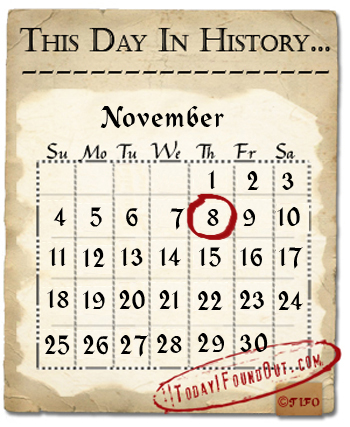 1793 : Paris Opened its doors to one of the world’s largest museums and historic monuments- The ‘Musée du Louvre’ (French)  or The Louvre Museum (English). Located on the banks of the River Seine, the museum building was once the ‘Palais du Louvre‘ (Louvre Palace), the former residence of Philip II built in the 12th century as a fortress. Since then, many French Kings and Emperors resided there, adding their own extensions and renovations to the original building. In 1682, however, King Louis XIV shifted base to the Palace of Versailles, leaving the Louvre filled with art and sculptures collected over several generations of royals and allowed it to be used by the ‘Académie des Inscriptions et Belles-Lettres’ (French learned Society ) and the ‘Académie Royale de Peinture et de Sculpture’  (Royal Academy of Painting and Sculpture). Both of these institutions occupied the Louvre for over 100 years, till finally after the French Revolution it was decide by the National Assembly, that the Louvre should be converted into a national museum. On November 8th, 1793 the Museum officially opened with an exhibition of 537 paintings 184 objects of art  from the royal collections as well as from seized church property. Today the Louvre holds more than 380,000 objects over 35,000 works of art. It’s one of the most famous and popular museums in the World with over 8 million people visiting it each year.

1960: Senator John F. Kennedy became the nation’s youngest president to be elected in history, at age 43. Born in Brookline, Massachusetts, John Fitzgerald Kennedy also referred to as Jack Kennedy, got into politics after serving in the U.S Navy during World War II. Kennedy rose from the Mayor of Boston to Democratic Congressman and finally advanced to the Senate in 1955. In 1956, he was nominated  for Vice President, and four years later was a first-ballot nominee for President. On this day in 1960, Kennedy won the people’s hearts and votes to beat out Republican nominee and Vice-President Richard Nixon in a very close race to become the 35th President (and the first Catholic president) of the United States.

1974 : Police got their first major break in the Ted Bundy serial killer case, as he slips up, attempting to kidnap a woman named Carol DaRonch. Dubbed as America’s worst serial killer, Theodore Robert Cowell (born in November 1946), grew up in Burlington, Vermont with a less than normal childhood. The illegitimate son of Eleanor Louise Cowell (known as Louise), he grew up believing his grandparents were his parents, and his mother his elder sister, which was not uncommon in the case of illegitimate births at the time. The identity of his real father, although unknown, was rumored to be his own grandfather (Samuel Cowell), whom he most ‘identified with’ and respected (as told to Biographer and true crime writer Ann Rule). But, Samuel Cowell was a far cry from an ideal role model for a young mind.  He was known  as a tyrannical bully and bigot, an abusive husband and father, and was described as explosive and violent. In the 50’s Ted’s mother Louise, moved to the North-West and married Johnny Bundy, formally adopted Ted giving him the handle ‘Ted Bundy’. He, however, remained aloof and distant from his stepfather and the family he had with his mother.

In 1967, while studying at the University of Washington, he became romantically involved with a fellow classmate by the name Stephanie Brooks (may be a pseudonym). It is said that their break up had a big impact on him and his future victims bore physical similarities to Brooks, with whom he was obsessed. He dropped out of college and was believed to have gone on a hunt to confirm his true parentage. After of a couple years, he re-enrolled as a psychology major at the same University and was in a long term relationship with a  Elizabeth Kloepfer (a.k.a Meg Anders, Beth Archer, or Liz Kendall) and went on to study law at the University of Utah. He reconnected with Brooks years later (a relationship in which they had even discussed marriage), only to abruptly break off their relationship just as she had done to him earlier. It was around this time that young women began to disappear in the Pacific Northwest and Ted stopped attending law school.

Although it is unknown just how many people Bundy had murdered in his initial years, it wasn’t until November 8th, 1974 in Utah that Carol DaRonch narrowly escaped being abducted by the serial killer. Posing as a detective, Bundy attempted to lure DaRonch into his Volkswagen, only to handcuff her and hit her with a crowbar. DaRonch fought back and managed to escape to safety and called the police. Her failed kidnapping raised suspicions and tied him to several young women from Utah, who disappeared earlier in the fall of 1974, as well as to many murder cases in the Seattle area, where the authorities were looking for a young man named Ted.

Almost a year later, Bundy was found, arrested, and convicted of the attempted kidnapping of Carol DaRonch. They tried to connect him to the other unsolved murders too, but in the meantime, Bundy escaped from prison, putting him on the FBI’s Ten Most Wanted Fugitives List. When he was later captured again and convicted of murder on a number of counts and sentenced to execution, he finally confessed to 30 homicides committed in seven states between 1974 and 1978, although the true number is suspected to be much higher. He gave detailed accounts on some of his crimes (some even that police had been unaware about) that included kidnappings, rapes, homicides and even necrophilic behavior. He even confessed to decapitating at least 12 victims and keeping some of the severed heads in his apartment as mementos for a period of time.

1984: Astronaut Dr. Anna Fisher became the first “mom” to go into orbit, on the space shuttle Discovery. Born in New York on August 24, 1949, Fisher grew up in San Pedro, California where she received a Bachelor of Science in Chemistry and a Doctor of Medicine from the University of California, Los Angeles. After working for several years in Hospitals in the Los Angeles area, Fisher got selected for as a NASA astronaut candidate in 1978. After training, her evaluation made her eligible to be assigned as a mission specialist on space shuttle flight crews. In 1984, her dreams of seeing the Earth from space finally came true as she was on board the space shuttle Discovery to deploy 2 satellites and become the first mother in space. She was also awarded the Mother of the Year Award, 1984 by the American Mothers, Inc. for her achievements.

tagged with november 8th, this day in history novem 8, this dsy in history