This Day In History: November 5 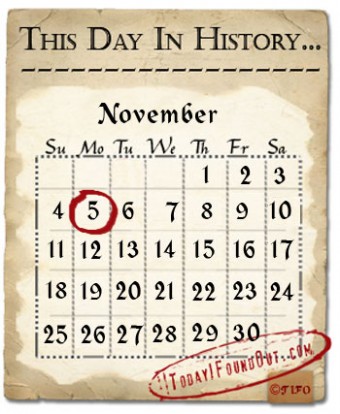 On this day in history, November 5th…

1492 : Columbus was among the first Europeans to encounter corn(maize) from the Indians of Cuba. When Columbus landed in Cuba (claiming it for Spain) he had sent two Spanish scouts to explore the interior of the island. According the explorer’s journal that day, the Spanish scouts came back with stories about an amazing new grain they had learned about, which the locals called ‘mahiz’ in their native tongue. They baked and dried this grain, making a flour out of it.

1872 :  Women’s right activist, Susan B Anthony, was arrested because she and a group of other women cast their ballots in Rochester, New York. Anthony had been fighting for the right for women to vote in the United States since 1852. Anthony’s reasoning for why she should be allowed to vote now was that since the Fourteenth Amendment of the Constitution, adopted in 1868, stated “all persons born and naturalized in the United States…are citizens of the United States,” women should be entitled the privilege to vote as they too were citizens. On November 1, 1872, Anthony, her three sisters, and a group of women entered a voter registration office set up in a barbershop and demanded that men stationed there register them as voters. After a heated debate with the election inspectors and Anthony arguing their constitutional rights, 14 Rochester women successfully registered that day. However, on election day when the 7 or 8 women, including Susan Anthony cast their ballots, she was arrested and prosecuted.  Unfortunately, after a grueling trial Anthony was found guilty by the jury for  “knowingly” casting an illegal vote.  She was ordered to pay a fine of one hundred dollars and the costs of the prosecution, which she refused to pay stating  “May it please your honor, I shall never pay a dollar of your unjust penalty.” True to her word, Anthony never paid a penny of her fine and instead turned her trial and conviction into a forceful movement for women’s rights. Anthony spent over fifty years of her life fighting for the right to vote. (Another interesting read on the subject: The First Woman to Cast a Vote in Chicago Did So With Her Feet)

1917 : The Supreme Court decided against the Louisville, Kentucky city ordinance in the Buchanan v. Warley  case, that instituted racial segregation in residential districts. Since 1910, many Southern cities, border states, and lower Midwest towns responded to a wave of African-American in-migration from rural areas by passing laws mandating that blacks & whites live in separate areas. The Louisville ordinance prohibited the sale of property to ‘colored’ people. But on this day, the Buchanan Court unanimously  ruled that the  city ordinance was in direct violation of the Fourteenth Amendment and was a deprivation of liberty as well as property without due process. This case was one of the most significant civil rights cases decided before the modern civil rights era.

1937: Hitler held a secret conference at the New Chancellery in Berlin expressing his deliberate intent to start a war. According to the Hossbach Memorandum, a summary of that meeting on this day, the German dictator outlined his plans to expand in Europe. His intent was to start small wars in a view to salvage Germany’s economy that was in danger of collapse. He bluntly indicated that Germany should resort to an aggressive policy and seize countries like Austria and Czechoslovakia to provide German people enough living space, or “Lebensraum” as he called it, for a Greater Germany. Moreover, he announced that in the near future, it was imperative to act  “two hate-inspired antagonists”. He was referring to Britain & France. He went so far as to call his speech his “political testament”. Although there isn’t unanimous agreement among historians, this meeting, along with the three other meetings Hitler held in 1939, sparked what we call the Second World War.

1935 : The popular board game Monopoly was first launched by the Parker Brothers. In 1903, a game called ‘The Landlords Game’ was conceptualized by Elizabeth Magie Phillips, intended to bring to light the negative aspects of Henry George’s single tax theory. That concept evolved into the game of Monopoly, as we know it today. It involves the buying, selling, and development of that land until it reaches the domination of the market by a single entity. The game  Monopoly was  published and officially launched by the Parker Brothers game company on this day.

tagged with november 5, this day in history