On this day in history, November 27th… 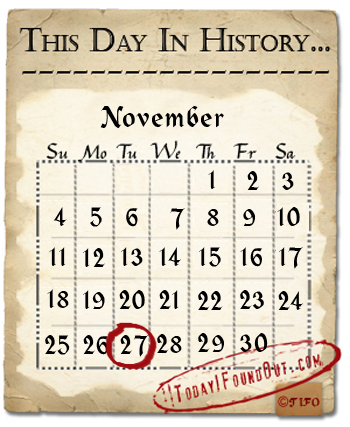 1095: A Crusade was launched by Pope Urban II,  the first of seven major military campaigns fought over two centuries. The Emperor Alexios I Komnenos of the Byzantine Empire appealed to the Pope and requested the help of western volunteers to repel the invading Seljuq Turks from Anatolia.  In response to his plea and taking it as an opportunity to reclaim the Holy Land (Jerusalem) back from the Turks and to the release the eastern-European Christians from Islamic rule, Pope Urban II made one of the most influential speeches of the Middle Ages, graphically detailing the atrocities being committed against pilgrims and eastern Christians. He spoke of a new kind of war he called an armed pilgrimage of sorts and promised heavenly rewards and remission of sins for those who took part in it. Although he did not directly mention taking back Jerusalem as an objective of this crusade against Muslims, it was implied in his sermons & preaching and was definitely an underlying motive of the Pope. His word was spread throughout France, Italy, and Germany through the bishops and clergy and he managed to amass tremendous support throughout Europe, which was greater than anyone expected. Hundreds of thousands of crusaders; comprising of peasants, knights, and people from all walks of life,  marched on to Jerusalem massacring thousands of Muslims and Jewish inhabitants. The death toll was greatly increased by the inexperience of the Christian peasants against the trained Muslim armies, but ultimately the army of knights recaptured the city in 1099.

1924 : The Macy’s Thanksgiving Day Parade in New York was first started. Contrary to popular belief, the Macy’s Thanksgiving parade was not the first of its kind, but rather it ties as the second-oldest with “America’s Thanksgiving Parade” by the J.L. Hudson Company in Detroit, Michigan, that also started in 1924. The oldest parade held on Thanksgiving in the States was the Gimbels’ Thanksgiving Day Parade started in 1920.  However, the Macy’s parade is probably the most popular of the bunch. In the Macy’s parade, employees dressed as clowns, cowboys, and other fun costumes; there were also professional entertainers and bands on 3 creative floats (pulled by horses) with borrowed animals from the Central Park zoo.  They marched the length of six miles from 145th Street in Harlem to Macy’s flagship store on 34th Street Manhattan. Santa Claus concluded the line-up of the parade, a tradition that continues to this day. The parade was such a successful event that it was decided to make it an annual tradition from then on.

1968 : Penny Ann Early became the first woman to play in a professional major basketball league. The American athlete first stormed the nation by becoming the first licensed female jockey in U.S horse racing in 1968, when as a show of “male solidarity” all the other jockeys unanimously refused to race in any of the three races Early had entered. This took place at the Churchill Downs in Louisville, Kentucky. The controversy made her instantly famous, that brought on a bunch of unexpected offers. Even though Early had never played basketball at any level (she was just 5’3″ and 112 pounds), the Kentucky Colonels of the American Basketball Association signed her on to their team. On November 27th, in a game verses the Los Angeles Stars, the Kentucky Colonels (management & owner) ordered the reluctant coach, Gene Rhodes to put Early in the game. She made her debut in professional basketball wearing a miniskirt with a turtleneck sweater (she had the number 3 on her back to represent the three boycotted races at Churchill Downs) and took the ball out of bounds and inbounded it to a wide-open teammate. After that short play in the game, a timeout was called and the Colonels removed Early. She exited the court to a rousing standing ovation and signed hundreds of autographs after the game. That was it for her basketball career and even though it was just a publicity stunt,  she is still considered the first woman to play in a major professional basketball league.

1971 : The Soviet’s ‘Mars 2 Orbiter’ became the first man-made object to reach the surface of Mars. The unmanned space probe was part of the Soviet Space Progam’s Mars series of missions first launched on November 14th, the same day as NASA’s ‘Mariner 9′. Arriving 2 weeks after the Mariner 9, Mars 2 was set to release their orbiters immediately, but unfortunately a  large dust storm on Mars resulted in the orbiters taking pictures of the featureless dust clouds below, rather than the surface mapping that was intended. On November 27th, 1971, the Mars 2 descent module, equipped with two television cameras with a 360 degree view of the surface along with other devices to study the atmospheric composition, attempted to set down on the planet. It malfunctioned and entered the planet’s atmosphere wrongly causing it to crash land onto the Martian surface. While it wasn’t a successful mission, it is dubbed as the first man-made object to impact the surface of Mars.