On this day in history, November 13th… 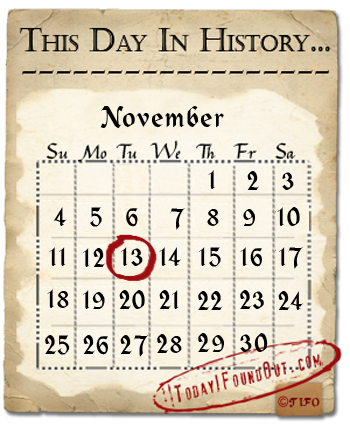 1927:  A tunnel under the Hudson River, connecting the Island of Manhattan to New Jersey was opened. Originally known as the “Hudson River Vehicular Tunnel” or the “Canal Street Tunnel”, the Holland Tunnel (named after chief engineer,  Clifford Milburn Holland) as it is known today was the first of two tunnels built under the river. Designs for the tunnel began in 1920 and the biggest challenge for engineers was ventilating the tunnel to keep it safe from the poisonous carbon monoxide fumes emitted from automobiles. To overcome this, the two-tube tunnel that burrows through the bedrock beneath the river uses 84 fans in four ventilation buildings to completely change the air inside the tunnel every minute and a half, via a system of ducts. President Coolidge inaugurated the tunnel on this day.

1982: A memorial wall inscribed with the names of American veterans that died (or were unaccounted for) in the Vietnam War was dedicated in Washington D.C. On this day, thousands of Vietnam War Veterans marched to the simple V-shaped memorial walls designed by Maya Ying Lin, a 21-year-old Yale University architecture student who won the honor of designing it (out of 1,421 other design entries). The 10.1 feet (3 m) high black stone walls extend 246 feet (75 meters) long and are pointed in the directions of the Washington Monument and the Lincoln Memorial. Etched in the walls are the names of over 58,000 servicemen who were either killed in action or were MIA (missing in action) listed in chronological order on 72 panels. The Vietnam Veterans Memorial is one of the most visited memorials in the capital city, with around 3 million visitors each year.

1985 : Dubbed the ‘Armero Tragedy’, over 23,000 people in Armero, Columbia were killed by volcanic mudslides (lahars) caused by the eruption of the Nevado del Ruiz Volcano. After 69 years of being dormant, the Nevado del Ruiz volcano in Tolima, Colombia erupted causing a pyroclastic flow (a current of superheated gas and rock that moves a speed of around 450 mph (700kmph) away from the volcano) to melt the mountains snow cap and glaciers. This in turn sent 4 lahars (mudslides and debris flows caused by the volcanic eruption)  down the mountain and into river beds that swept into the sleeping town of Armero burying it in thick mud that had the density of concrete. Over 20,000 of the town’s 29,000 people were killed that day and another 3,000 people from the neighboring towns died as well. This was not the first lahar that Armero has seen, in 1845, a lahar swept through the town killing over 1000 people. The town itself was re- built directly on top of the 1845 mudflow deposit.

2002 : A huge oil spill off the Galician coast is caused by the sinking of an oil tanker named “Prestige”. The Greek-operated tanker Prestige was carrying 77,000 metric tons of heavy fuel oil when on November 13th,  one of its tanks burst during a storm off the coast of Spain. The captain feared that the ship would sink and called Spanish authorities for assistance to bring the ship in. But to their surprise, the ship was instead ordered to move away from their coast and to head northwest. To protect its shores, the French authorities then forced the ship to again change its course and head south towards Portugal. Portugal then ordered its Navy to keep the damaged vessel from coming near its shores. With all three countries refusing the ship help, the ship fell apart, splitting in two and sunk on November 19th spilling approximately 80 percent of the tanker’s 77,000 tons of fuel oil in the ocean near the northwest coast of Spain. The beaches of all three countries that denied it assistance were badly affected.

tagged with november 13th, this day day in history