This Day In History: November 12

On this day in history, November 12th… 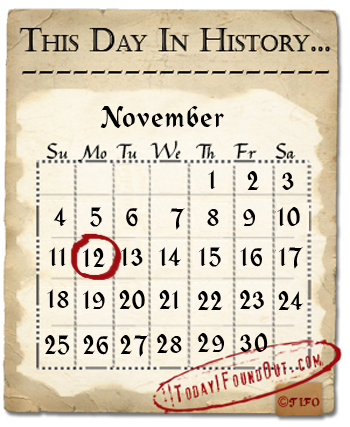 1799 : The Leonids meteor shower was the first known meteor shower to be recorded in North America.  According to the journal entry on this day,  astronomer Andrew Ellicott Douglass who was onboard a ship off the Florida Keys, wrote “whole heaven appeared as if illuminated with sky rockets, flying in an infinity of directions, and I was in constant expectation of some of them falling on the vessel. They continued until put out by the light of the sun after day break.” The meteor shower Douglass was referring to was the Leonids shower (associated with the comet Tempel-Tuttle), from the constellation Leo that occurs in cycles of around 33-34 years. Peaking almost annually in November; the 1966 Leonids meteor shower was said to have been the most spectacular one of all, where a high of literally thousands of meteors per hour were sighted, falling like rain.

1892 : William “Pudge” Heffelfinger became the first person on record to play American Football professionally. Before this day, there is no known record of any players openly accepting cash payment to play the sport, unlike baseball that had gone ‘professional’ almost 25 years earlier. Football players used to trade their services for expense money, or for trinkets that they could pawn off. In 1892, Pudge Heffelfinger, a football star at Yale,  was offered $250 by Pittsburgh Athletic Club (PAC) to play in a game, but he turned down the offer because he felt it wasn’t enough to jeopardize his position in the Amateur Athletic Union (a non-profit volunteer sports organization in the U.S). Shortly after on November 12, 1892, Allegheny Athletic Association (AAA) made a counter offer which Heffelfinger is said to have accepted. According to their ledger entry for that day, Heffelfinger was paid $25 for his expenses and a ‘Game performance bonus for playing”  $500 in cash. The Pittsburgh Athletic Club was shocked to see Heffelfinger in a AAA uniform and they were furious. AAA never admitted to paying the player, nor did the player disclose that he received such a payment, until years later the Pro Football Hall of Fame verified this with the AAA expense ledgers. A week after that game, AAA paid another football player from Stanford, Ben “Sport” Donnelly $250 to play with Pudge against the  Washington & Jefferson College.

1954 : America shut down the Ellis Island Immigration Station. For over 60 decades, since January 1st, 1892, Ellis Island (named after merchant Samuel Ellis, who owned the land in the 1770s) was known as  the gateway into America, as it processed millions of new immigrants into the country. According to The Statue of Liberty-Ellis Island Foundation , “The first immigrant to pass through Ellis was a ‘rosy-cheeked Irish girl,’ Annie Moore, age 15, from County Cork”. Over 700 immigrants passed through the Island that day and over half a million immigrants were processed by the Ellis Island Station its first  year. During World War I, the Island was used as detention center for suspected enemy aliens and crews from German merchant ships. It was also used as a way-station to treat sick and wounded servicemen. After the war, the immigration station continued to perform its function as a federal immigration center at which time it also expanded in area (by reclaiming land), until 1924, when the immigration laws were made stricter and sharply reduced the number of newcomers allowed into the country. The station then changed from processing immigration to other functions, such as a detention and deportation center for illegal immigrants; a hospital for wounded soldiers during World War II; and a Coast Guard training center. On November 12, 1954, Ellis Island released its last detainee and was officially closed down. It wasn’t until 1976 that Ellis Island re-opened as a Museum and became a part of the Statue of Liberty National Monument. It’s said that over 100 million Americans today can trace their roots to family that entered America via Ellis Island.

1970 : The ‘exploding whale’ incident took place in Florence, Oregon. On this day, in an attempt to get rid of a rotting carcass of a 45-foot (14 meter), eight-ton sperm whale that had beached itself, the Oregon Highway Division came up with a not so brilliant plan to blow it up. They then proceeded to shove half a ton of dynamite (that’s 20 cases of dynamite) in the whale. The result was large flying chunks of blubber that ended up far beyond what you’d imagine. Large pieces of whale were found on nearby buildings and in parking lots causing severe damages to cars. To top it off, most of the carcass remained intact on the beach and the birds that were eating away at it were all scared away by the blast. The whole incident was caught on camera by news reporters for  KATU-TV in Portland, Oregon. The Oregon State Parks Department has since made a policy to bury whale carcasses where they land, instead of blowing them up after.

1990 : British computer scientist Tim Berners-Lee and colleague Robert Cailliau formally publishes a proposal for the World Wide Web. Working as an independent contractor at the  European Organization for Nuclear Research (CERN), Switzerland, Tim suggested a global hypertext project to solve the problem of sharing data with no common machines and no common presentation software. Along with his colleagues, he came up with a communications protocol using the internet called HyperText Transfer Protocol (HTTP) that standardized communication between computer servers and clients. He called it The Information Mine (TIM) or Mine of Information (MOI) before settling on the ‘World Wide Web’. In 1989, together with  Robert Cailliau, they wrote up a formal proposal of their idea which was published on November 12, 1990 and  thus the Web as we know it got its start.

tagged with november 12, this day in history