This Day In History: November 11 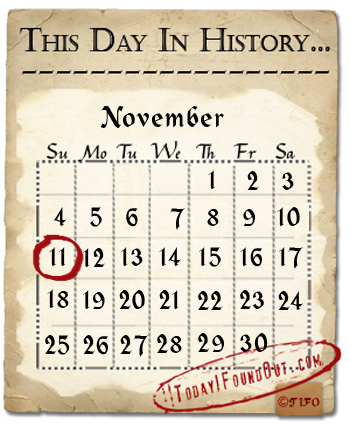 On this day in history, November 11th…

1620 : The Mayflower anchors in Cape Cod, Massachusetts (what is now known as Provincetown Harbor), instead of their intended destination of Virginia.  The Pilgrims also signed what is known as the ‘Mayflower Compact’. This was the first governing document of the Separatists (who were also known as the Saints, Pilgrims, and Plymouth Colony) in which they agreed to join together to establish a government of their own in America. It was signed by 41 men (including future leaders such as William Bradford, Myles Standish, John Carver, William Brewster and Edward Winslow) aboard the ship that day. John Carver was chosen the first governor of the Plymouth Colony.

1852 : Famed author of the book “Little Women”, Louisa May Alcott published her first story “The Rival Painters: A Story of Rome”. Louisa was one of four daughters of transcendentalists (i.e -people who were part of an intellectual movement in the 1830s & 40s) and was schooled by her father (Amos Bronson Alcott), a staunch believer in education and shaping one’s mind to desired perfection. Growing up, she was also surrounded by educators and writers such as  Ralph Waldo Emerson, Nathaniel Hawthorne, and Margaret Fuller, as they were family friends of the Alcott’s. As a teenager Louisa wrote several plays, poems, and short stories as she discovered her love for writing. At the young age of nineteen (1951), she achieved her first publication under a pseudonym “Flora Fairield”. It was a poem titled “Sunlight”. A year later, on November 11th, the ‘Saturday Evening Gazette’ published a short story of hers for the first time. Of course, Alcott’s two- part semi-autobiographical novel originally titled “Meg, Jo, Beth, and Amy” (1868), better known as “Little Women”, established her as a great writer. The second volume to the novel was known as “Good Wives ” and followed the story of the March sisters as they entered their respective marriages.  Alcott later wrote two more books to complete the ‘March Family Saga’, they were titled “Little Men” (1871) and “Jo’s Boys” (1886).

1918 : The Allies & Germany signed an agreement to stop fighting at the at the 11th hour on the 11th day of the 11th month of 1918, which in turn ended the Great War (World War I). On Armistice Day, as it is known, the Germans responded to the Fourteen Point policies proposed by Woodrow Wilson, the American President. With very little left in terms of manpower and supplies, Germany faced imminent defeat, so they signed an armistice agreement with the Allies in a railroad car outside Compiégne, France. Although the signing of this agreement did not signify that Germany surrendered, it marked a victory for the Allies and an unofficial end to the war. The official end of the War took place on  28th of June, 1919 when the Treaty of Versailles was signed. The war left a trail of devastation behind it in the countries that participated (Germany, Russia, Austria, Hungary, France and Great Britain), a death count of over 9  million soldiers, around 21 million injured and millions of civilians that died of starvation, exposure, and disease.

1930 : Albert Einstein and his former student Leó Szilárd were granted a patent for an absorption refrigerator, known as “Einstein refrigerator” or “The Einstein-Szilard”. The two were inspired to work on an improve home refrigeration systems after hearing news reports of a family in Berlin that had been killed because of toxic fumes that leaked from their refrigerator when the seal broke. Their main idea, to prevent seal failure, was to eliminate moving parts altogether. They accomplished this by designing a single-pressure absorption refrigerator using ammonia pressure-equalizing fluid, water absorbing fluid, and a butane refrigerant,  keeping the design similar to the one used in the gas absorption refrigerator. They received 45 patents from several countries for three different models of their design. The most promising of their patents were bought by the Swedish company, Electrolux.

1994 : Bill Gates paid $30.8 million to buy Leonardo da Vinci’s “Codex”. Possible the most famous scientific writings of Leonardo Da Vinci, the Codex is a manuscript of his observations and theories regarding many topics, including astronomy, properties of the four elements, fossils and celestial light to name a few. Handwritten in Leonardo’s characteristic mirror writing in Italian, the 72-page document was named ‘Codex Leicester’ after Thomas Coke (pronounced cook) a wealthy English nobleman and first Earl of Leicester, who bought it in 1719. Armand Hammer then acquired the Codex in 1980 and renamed it Codex Hammer. However, in 1994 when Bill Gates purchased it at an auction, he changed the name back. He then had the pages scanned to make digital copies that were distributed on CD-ROM as screen savers and wallpaper for Windows 95.

tagged with november 11th, this day in history