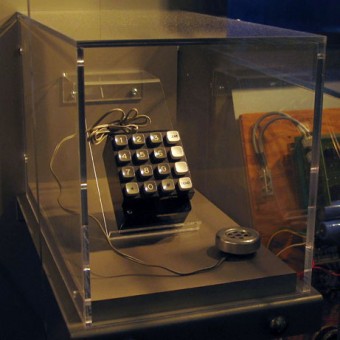 A Blue Box designed and built by Steve Wozniak, currently residing in the Computer History Museum in Mountain View California

These boxes were designed in 1972 by Jobs’ close friend and future co-founder of Apple, Steve Wozniak.  The idea to sell them was supposedly Jobs’.  The two learned about blue boxes from famed “phreaker” (phone freak/hacker) John “Cap’n Crunch” Draper. (This nickname was alluding to a whistle given away in the 1960s in Cap’n Crunch cereal which produced the perfect tone, 2600 Hz, to allow a person to enter operator mode on AT&T’s phone system.  Draper later briefly worked at Apple, even while serving a five year jail sentence for his phreaking escapades.)

The blue box worked by producing certain tones that were used in the telephone system to switch long distance calls.  Once you made a long distance call, you could use the box to enter operator mode, then use it to route your call as you wanted and to wherever you wanted, all for free and extremely difficult to trace, making blue boxes a popular item amongst various criminal elements.

As Jobs explained, you could use the device to call “from a payphone and go to White Plains, New York, take a satellite to Europe, take a cable to Turkey, come back to L.A…. You can go around the world 3 or 4 times and call the payphone next door and shout in the phone and it would be about 30 seconds and it would come out the other phone.”  (This was something John Draper used to demonstrate to people  at parties using one of his own blue boxes.)

Jobs and Wozniak became intrigued with the idea of trying to make one of these boxes.  As Jobs explained in a 1995 interview,

We were so fascinated by them (blue boxes) that Woz and I figured out how to build one. We built the best one in the world; the first digital blue box in the world.  We would give them to our friends and use them ourselves.  And you know, you rapidly run out of people you want to call.  But it was the magic that two teenagers could build this box for $100 worth of parts and control 100’s of billions of dollars of infrastructure in the entire telephone network in the whole world…

Experiences like that taught us the power of ideas.  The power of understanding that if you could build this box, you could control 100’s of billions of dollars around the world, that’s a powerful thing.  If we wouldn’t have made blue boxes, there would have been no Apple.

The two stopped making the boxes after they were nearly caught by the police.  Despite giving up on the venture, they reportedly made about $6000 selling the blue boxes and Wozniak claims he once was able to prank call the Pope, posing as Henry Kissinger.  The Pope unfortunately was sleeping at the time, so he wasn’t able to talk to him directly.  Draper claims he once successfully prank called President Nixon using his own blue box.

Since the mid-1990s, blue boxes no longer work in most countries as phone systems throughout the world have been revamped using a digital system and no longer use the in-band signaling that the blue box exploited.  Specifically, the new system separates the voice and signaling channels.

As it’s the one year anniversary of Steve Jobs’ death today (dying on October 5, 2011), here’s another great video from Jeremiah Warren, this one on “The History of Steve Jobs”.  You’ll also find more Bonus Steve Jobs facts below the video.