How the Marx Brothers Got Their Nicknames 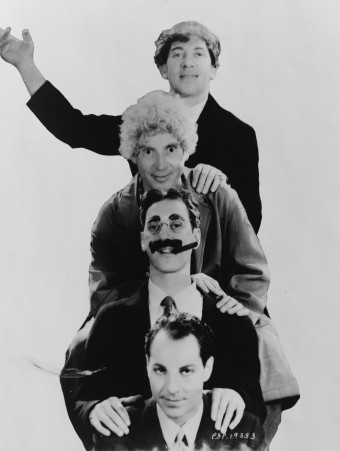 Today I found out four of the five Marx brothers got their nicknames during a poker game.

The famed Marx family comedy act was made up of Julius, Adolph, Leonard, Milton, and Herbert Marx. But to all of us who know and love this delightful comedy group, we know these five characters better as Groucho, Harpo, Chico, Gummo, and Zeppo Marx, names four of the five were given one fateful night in 1915.

The boys got involved in a poker game in Galesburg, Illinois with monologist Art Fisher.  It was a popular fad around this time to give everyone and anyone a nickname that ended in “o”.  For instance, common nicknames were things like “Jingo” or “Bongo” or “Ringo” or “Typo” or “Cheerio”.  (You get the idea.)

In this poker game, Fisher was dealing out the cards to the four Marx brothers and he gave them each their nicknames in rapid fire.  “First, here’s a card for ‘Harpo’.” Harpo was the easiest, Adolph Marx played the harp.

“Here’s one for ‘Chicko’.”  Leonard Marx was a notorious ladies’ man and, in those days, women and girls were often referred to as “chickens”.  (Later, as now, the slang term became “chicks”, which had actually previously referred to children since the 17th century.)  As Groucho later said, Chico got the nickname as he was a “Chicken chaser”.

You might be wondering at this point, why it was later “Chico” instead of “Chicko”.  Supposedly, a typesetter accidentally left the “k” in “Chico” out in one town the brothers were performing in, and his name became “Chico” instead. This typo gave rise to the misconception that his name should be pronounced as “cheek-o”, when in fact the correct pronunciation is actually “Chick-o”.  Although, Chico rarely corrected people when they pronounced it wrong, even show hosts who’d interview him.

Next to be dealt a card was Julius, “and here’s a card for Groucho”.  As to why this nickname was picked, there are two popular explanations and one that for a long time was put forth by Groucho, which few believe.  The first is that the name derived from Julius’ not-so-friendly demeanor.  Julius denied this for most of his life.   The second popular theory is that it had to do with an item he commonly carried with him, a big pouch-type container, popular at the time, called a “grouch bag” (a.k.a. a small purse that goes around your neck and under your shirt), where Groucho kept his money.

The origin story Groucho himself often put forth was that he got the nickname after “Groucho the Monk” from the Knocko the Monk comic strip.  However, shortly before he died, Groucho said that he hadn’t been entirely honest about the origin of his name and that Al Fisher had given him the nickname because of a propensity towards moodiness.  However, it isn’t clear if this is any more accurate than his “comic strip character” origin story.

The fourth and least-known Marx brother was Milton, “and here’s a card for Gummo”, Fisher said, as he dealt the final Marx brother his card.  This one has two popular theories behind it, but the one the family (excepting Harpo) states is correct is that Milton often wore gumshoes (rubber soled shoes), hence the “gummo” moniker.  The alternate origin put forth by Harpo is that Gummo was sneaky and would creep up on people like a gumshoe detective.  In both cases, the origin is related to the rubber soled gumshoes (where gumshoe detectives got their name).

As to how the fifth Marx brother got his name, that one’s completely up for debate.  A few years later, the new straight man and the youngest of the five brothers entered the act, replacing older brother, Gummo.  Herbert Marx somehow became the infamous “Zeppo” Marx.  Harpo said Zeppo was named in honor of a wild monkey who played on the bars and ran around named “Zippo”.  Groucho, on the other hand, said in 1972 that Zeppo was named after the Zeppelin airships.