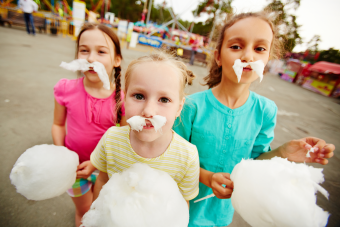 Today I found out the cotton candy making machine was co-invented by a dentist, who  later became the President of the Tennessee State Dental Association. Coincidence?

While candy floss / cotton candy-like spun-sugar confectioneries have been around since at least the 15th century, if not earlier, it’s only been recently that cotton candy has been something practical to make and sell. So despite the fact that the amount of sugar itself in a typical serving of cotton candy is quite small, only about 30 grams or about 2 tablespoons, the time consuming handmade production of it and how quickly it loses its fluffy nature when exposed to air made it something that wasn’t well known or eaten except by certain wealthy individuals.

Cotton candy reached its current form and became accessible to the masses thanks to the efforts of Dentist William Morrison and candy maker John C. Wharton in 1897.  That year, the two got together and invented an electric machine that would first melt crystallized sugar, then spin the melted sugar such that it would be forced through tiny holes in a screen, which would create the threads of cotton candy.  These threads could then be collected into a container. In their case, they sold them initially in small chipped-wood boxes.  This entire process could be done quite quickly and easily, which is essential when selling cotton candy as it’s hygroscopic and has a very large surface area, so gathers moisture from the air quickly causing it to lose its fluffy texture, turning into sticky/coarse strands, particularly in humid regions.

Morrison and Wharton introduced their machine and cotton candy to a widespread audience at the 1904 St. Louis Fair, which was actually originally called the Louisiana Purchase Exposition.  That fair also helped popularize the ice cream cone, Dr. Pepper, Hot dogs in buns, Hamburgers, and peanut butter in America. (Although, contrary to what you might read elsewhere, it is not where any of these things first debuted to the public. It just helped popularize them.)

As a side benefit, one would assume Morrison’s dental practice may have been helped a bit by this, although not as much as the next cotton candy making dentist who specifically targeted his own patients when selling the confectionery. That dentist was Josef Lascaux, who also independently invented his own machine for making cotton candy.

Rather than sell it to the masses, he first simply started selling it at his dentist’s office.  When exactly he started doing this isn’t entirely known, but it is generally thought it was at least a decade, if not close to two after Morrison and Wharton.

That said, while Lascaux probably wasn’t the first to invent a cotton candy making machine, he is generally credited for giving it its name around 1921.  In the 17 years since its widespread introduction at the World’s Fair, it had been called by the name Wharton and Morrison had named it, “Fairy Floss”.  But in the 1920s, Lascaux’s name for it, “cotton candy”, became much more popular with “fairy floss” slowly dying out in popular use.