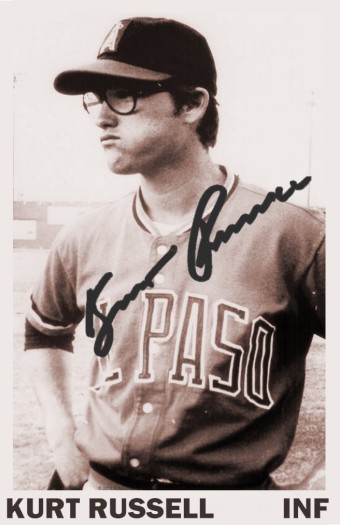 Today I found out Kurt Russell was a minor league baseball player until an injury ended his career.

While the Russell family is mostly known for their acting, “Baseball is really the family business that nobody knows about because our other business was sort of out there in the public and seen by a lot more people,” said Kurt Russell.

Kurt’s father, Bing Russell, who is perhaps best known for his role as deputy Clem Foster in Bonanza and Robert in The Magnificent Seven, also played in the minor leagues, playing in 1948-1949 for the Carrollton Hornets. Besides acting, Bing Russell went on to own and run the Portland Mavericks baseball team.

Kurt inherited his father’s love for the game of baseball and even though he was already a reasonably successful actor by the age of 20, having appeared in 9 movies and numerous TV shows at the time, he decided to pursue baseball professionally,

I played ball from when I was a kid. It’s just always been in my family. My dad had minor league teams. My great grandfather was a great ballplayer. I played it as long as I could. And I always thought I could do both. I wasn’t really serious about acting — I was serious about baseball. I don’t know if it was more important to me than acting, but I was a young man… and I had geared up to play pro ball from the time I was 13 or 14. The acting was something that just came along. But I made good money acting, so it wasn’t something that I was just going to put aside and pretend it didn’t exist.

He was scouted by the Angels, Cardinals, Twins, and Giants, but the teams were all somewhat reluctant to sign him due to concerns (that ultimately proved valid) that he’d only be a part time player, taking time off on occasion to continue acting.  For instance, in 1971 when he signed with the Angel’s Class A Bend Rainbows club as a switch hitting second basemen, he reported late to spring training as he was still filming Now You See Him, Now You Don’t.

In an interview while playing in AA, Russell stated, “Movies take precedent in the winter and baseball in the summer . . . If I should get hit by a truck and my face was ruined, I will play baseball. If I find out I can’t hit that ball hard enough, I’ll make movies…  Baseball is [a] lot tougher than acting, a much greater challenge. Acting is really very simple. They give you the lines and you go out there and deliver them. Baseball is different.”

After playing for the Rainbows, he went on to play for the Walla Walla Islanders in Washington in 1972 and then the Portland Mavericks (owned by Bing Russell), and finally, in 1973, he played for the AA El Paso Sun Kings.

So was he any good? Former major league baseball player, Tom Trebelhorn, who played with Russell for two seasons in the minor leagues, had this to say, “Kurt could hit — that was his strength. He was a switch hitter and had very good bat accuracy — he could put the bat on the ball… The rest of his game suffered from the fact [that] he couldn’t devote enough time to it.”

While with the Sun Kings, Kurt batted .563 with a 1.526 OPS, technically leading the Texas League in hitting, though in just six games. In what turned out to be his final game with the team, he was attempting to turn a double play when the runner hit him, tearing Russell’s rotator cuff.  Russell described the event as follows,

I used to throw batting practice a lot, and with some injuries on the team, I was playing all the time which I hadn’t been earlier, and with throwing batting practice, I think my arm was somewhat tired. But I got hit high on a double play just as I turned it, and it surprised me because we were way ahead in the game and I thought the runner would turn off to right field. So it was my fault. I kind of lackadaisically came across the base and he hit me high. I didn’t know what happened but the next thing I knew I was lying flat on my back.

It didn’t really hit me how bad it was hurt at the time. I went out that night and played air hockey and I began to feel my arm bothering me. The next day throwing batting practice it didn’t feel right and over the next week it just got worse. Frank Tanana told me, “I think you’ve torn your rotator cuff.” I said, “What are you talking about?” I didn’t know what a rotator cuff was, it wasn’t that well known back then. Frank said, “Yeah, I know what that is. I think you’ve torn it and I think you might be done.” And I was like, yeah, sure.

After the injury, Russell was released from the team on May 17th, 1973, partially so he would be free to go do some acting while he was healing up over the next couple months. “If he can make a motion picture, we’ll let him,” said Bing Russell. “He can’t play for eight weeks, and then Dr. (Robert) Kerlan, the Angels’ team physician, says it’ll be another two weeks for him to get back in shape. That’s 10 weeks, so if he can make a movie, why not?”

After a brief 1 game, 1 at bat curtain call in 1977 with the Portland Mavericks, Kurt Russell ended up with minor league stats as follows: .292 batting average, .361 on base percentage, 2 home runs, and managed to walk almost as much as he struck out at 38 BB to 41 SO in a total of 356 at bats.  He also made the Northwestern League All-Star team in 1971.  Also, if you discount his post-injury at bats, he had a career minor league batting average of .313.