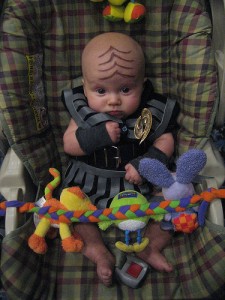 Today I found out a man once tried to raise his son as a native speaker in Klingon.

The man in question is computational linguist Dr. d’Armond Speers.  Speers is actually not a huge Start Trek fan himself. Indeed, many Klingon language enthusiasts aren’t, contrary to popular perception.  They tend to be language lovers fascinated by constructed languages, of which Klingon is a relatively thriving one, hence why they gravitate towards it. Speers became fascinated with the Klingon language after reading a flyer on a bulletin board at Georgetown where he was studying linguistics. The flyer was advertising the Klingon Language Institute (KLI), founded by Dr. Larence M. Schoen.  “I thought to myself, ‘A new language.’ The fact that it was a constructed language really appealed to me. It sounded like fun,” said Speers.

He soon became one of the more famous members of KLI when he decided to experiment with trying to teach his son Alec to be a native speaker of Klingon. He stated of this decision, “I was interested in the question of whether my son, going through his first language acquisition process, would acquire it like any human language.”

So as not to cause Alec to have potential learning disabilities and to make sure his son could fully integrate into society without language problems, Speers’ wife, who was fully behind Speers’ experiment, always spoke English to the child. (Lack of an adequate language for your brain to use before the age of 5-ish can severely stunt a person’s mental capacity and causes extremely detrimental learning disabilities in later life, even if a language is eventually learned. Through much of human history, this is largely why deaf people were once considered mentally deficient, even though with an adequate language taught to them at an early age, like a sign language, they are just as intelligent as anyone else on average.  For more on this, see:  How Deaf People Think.  Incidentally, Speers’ dissertation was on the topic of sign language, Representation of American Sign Language for Machine Translation.)

In any event, unlike his wife, Speers almost exclusively spoke to Alec in Klingon.  He even would sing the Klingon Imperial Anthem, May the Empire Endure, as a bedtime lullaby to the boy, which his son soon picked up and would also sing.  You can hear a recording of Alec singing this here.

This experiment went on for about three years, during which time, as you might imagine, Speers was given a lot of funny looks in public as he’d converse with Alec.  At first when people would ask what language he was speaking, Speers would respond, “speaking Klingon”, but after getting a lot of dirty looks and comments for this, he switched to just saying, “speaking a constructed language”, which generally would forestall potential negative remarks.

Despite certain people being aghast that a father would do this, thinking it perhaps detrimental to a child, Speers, being a language expert, had a different view on it. “My feeling is that it’s good for people in general to know more than one language. You get different viewpoints and perspectives on things, and there is evidence to suggest that kids who are bilingual do better academically, whether their second language is a constructed language or not.”

Despite the limitation of the language, Speers claimed, “I’ve been able to say almost everything I’ve needed to say to Alec in Klingon… One of the reasons I find the Klingon language so interesting is that because the vocabulary and grammar is so limited, you really have to think to figure out how you’re going to say something.” For instance, “When I ask him to turn out the lights, I say the Klingon for ‘make it dark’.”

This joy found in the difficulty in saying things in Klingon over English didn’t rub off on his son, and Alec eventually resisted speaking the language, as Speers anticipated in the beginning.  “There’s going to come a time when he’s going to stop making the effort to speak Klingon because it’ll be easier for him to speak English.”

Speers was also the only person who would speak Klingon to Alec and the boy never saw Star Trek during this experiment, so didn’t ever see anyone but his father speaking it.  As everyone else spoke English, Speers stated when Alec was about three years old, “He stopped listening to me when I spoke in Klingon. It was clear that he didn’t enjoy it, and I didn’t want to make it into a problem, so I switched to English…”

Today the teenage Alec no longer is fluent in Klingon and reportedly can’t even pick out the meaning of individual words of the language.

The Klingon Imperial Anthem, May the Empire Endure, sung to Alec as a lullaby is:

taHjaj wo’ ’ej taHjaj voDLeHma’  (May the empire endure, and may our emperor endure.)
wItoy’mo’ vaj nuquvmoHjaj ta’ (We serve him, so that he may honor us.)
Dun wo’maj ’ej Qochchugh vay’ (Our empire is wonderful, and if anyone disagrees,)
vaj DaSmeymaj bIngDaq chaH DIbeQmoHchu’ jay’! (We will crush them beneath our boots!)