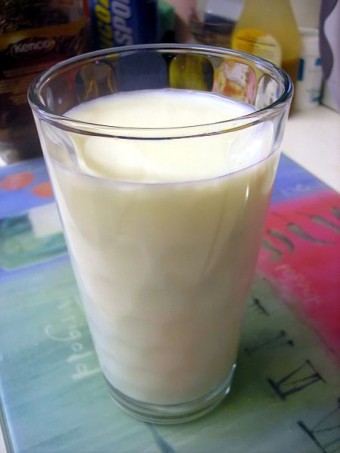 Today I found out what causes lactose intolerance.

Lactose intolerance is simply the body’s inability to digest lactose. Lactose is a disaccharide, or a molecule made up of two types of sugars, in this case, glucose and galactose. Most people have an enzyme (a protein molecule that breaks down other molecules) lactase in their digestive systems. This enzyme breaks down lactose into glucose and galactose. The body can then absorb and use these sugars for energy. When someone has a lactase deficiency, lactose cannot be digested and remains in the digestive system causing a wide range of unwanted symptoms, including abdominal pain, gas, diarrhea, nausea, and a bloated stomach.

When you eat any food, your body has to process it. You can think of your digestive tract, that path between your mouth and your anus, as a system that is essentially outside of your body, just contained within it. It’s the job of your digestive system to break down the foods we take in, allowing the nutrients to “cross-over” into the different body systems and organs for use as fuel. Each different part breaks these foods down differently. For example, the mouth chews it up into smaller parts. The stomach uses enzymes and acids to further break it down. The food then goes to the small intestine where most of the nutrients that come from our food (proteins, fats, and carbohydrates) get absorbed into the bloodstream by a process called diffusion. What is left over is then passed to the large intestine whose main job is the absorption of water that remains in the indigestible residue of food.

Lactose, for the most part, gets broken down by lactase in the small intestine. If this is done quickly enough, and completely, then no lactose reaches the large intestine. If lactose does reach the large intestine, it will begin to ferment creating lactic and other fatty acids (ahhh the cause of the burning, stabbing pain your watery stool invokes is revealed). Several types of bacteria (called intestinal flora) will also begin to digest and use the sugars. Their resulting metabolism can create the unwanted flatulence submarine dwellers everywhere fear! The longer the lactose stays in your colon, the greater the problem becomes. So pray your colon works quickly!

Primary lactase deficiency (sometimes known as Congenital Lactase Deficiency), for the most part, begins after age 2 and develops slowly over time. Before the age of two, children have a much higher level of lactase in their digestive tract. This is thought to help them better digest breast milk from their nursing mothers. After the age of two the body begins to produce less lactase, presumably due to the decrease in milk consumption. As a person develops, the symptoms begin to reveal themselves in late adolescence and early adulthood.

Secondary lactase deficiency is the result of injury or illness affecting the small intestine, or the body’s ability to make lactase. Some common causes include chemotherapy, celiac disease, or Crohn’s disease. So not only do you have cancer and have to be treated with a poison, but you might not even be able to enjoy a nice cup of warm milk to settle your nauseated stomach! The fates can be cruel!