Crocodiles Really Do Shed Tears When They Eat 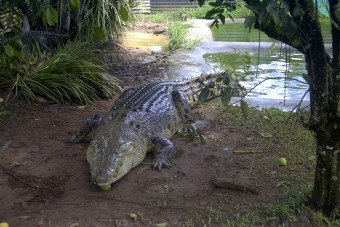 Today I found out crocodiles really do shed tears when they eat.

It has been known for centuries that crocodiles weep while eating. One of the earliest references to this comes from the 14th century bestseller The Voyage and Travel of Sir John Madeville, where the author writes

In that country and by all Inde be great plenty of cockodrills, that is a manner of a long serpent, as I have said before. And in the night they dwell in the water, and on the day upon the land, in rocks and in caves. And they eat no meat in all the winter, but they lie as in a dream, as do the serpents. These serpents slay men, and they eat them weeping; and when they eat they move the over jaw, and not the nether jaw, and they have no tongue.

Other such references to crocodiles being remorseful eaters can be found in both Shakespeare’s Othello and Henry VI plays.

Setting aside anthropomorphizations like “crocodiles cry because they are sad to have killed something”, it turns out there is a physiological reason for the phenomenon, though certain specifics about it are still up for debate.

In 2007, zoologist Ken Vliet and neurology consultant Dr. D. Malcolm Shaner observed and videotaped close relatives to crocodiles, caimans and alligators, while the reptiles were eating.  What they saw was that these reptiles do in fact produce tears when they eat and that some even had their tears “froth and bubble” around their eyes. Vliets conclusion was that the production of so many tears is the result of the hisses and huffs the animals make while devouring their prey. This feeding behavior forces air through the sinuses and stimulates the lacrimal gland to produce excessive tears. Some of the air escaping also produces the frothing and bubbling they witnessed.

Other crocodile experts like Adam Britton suggest that when a crocodile bites down hard on their prey, this squeezes tears out of their tear ducts which creates the weeping effect.  A similar explanation that has been proposed is that accumulated tears are almost always there, gathered below the eye, and begin to run down the jaws of the crocodile as it vigorously moves its head while eating.

Some experts assert that the tears produced are simply a protective measure during the violent actions that tend to surround a crocodile subduing its prey. In combination with their eyes receding into their heads as they manipulate their mouths, these tears can help keep the eyes from being damaged by debris in the water or the violent thrashing by an animal putting up a fight.