As a Teenager, the Inventor of PEZ Created One of the World’s First Ready-Made Cake Mixes 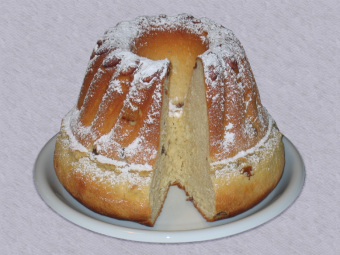 Today I found out, as a teenager, the inventor of the PEZ confectionery created one of the world’s first ready-made cake mixes, popularly selling it throughout the Austro-Hungarian Empire.

The teenager was Eduard Haas III.  Haas III’s grandfather, Eduard Haas I, was a doctor who invented a type of “light” baking powder which he advocated over yeast in recipes as he felt it was easier on people’s digestive systems.  As a teenager, Haas III began selling and promoting his grandfather’s baking powder at his father’s wholesale grocery store.

While the packets of baking powder Haas III sold came with a recipe book and suggestions on how much to use as a substitute for yeast in recipes, Haas III got the bright idea one day to save people the trouble of having to measure out all the ingredients for Gugelhupf cakes, a type of torus shaped Bundt cake made with raisins and almonds embedded in the cake.  Thus, in 1914, he started putting together packets of the necessary ingredients for Gugelhupf cake all mixed together, called “Hasin, the Ready-Made Health Sponge Cake Mix”, which sold extremely well all over the Austro-Hungarian empire.

About four years later, the now 20 year old Haas III began creating a line of other products including Haas Pudding Powder, Vanillin Sugar, and a gelling aid called Quittin, which also all sold quite well.

Now with his baking business booming, Haas III decided to branch out and helped develop a method of cold pressing peppermint into small “peppermint bonbon” bricks.  He distributed these to various friends and colleagues to get feedback on the peppermint candies and they were received well, so he went forward with selling “Pfefferminze” or “PEZ” to the public in small tins.

Fast forward to the 1940s where Haas III decided to start marketing PEZ as a substitute for cigarettes, specifically targeting people who were trying to quit smoking. (Haas III was a staunch anti-smoking advocate).  He reasoned that people who were trying to quit smoking would have the habit of needing to put something in their mouths, so hoped they’d use his confectionery bricks. His slogan for this was, “Smoking prohibited, PEZing allowed”… catchy…

Towards this end, in 1947 Haas III decided that instead of putting PEZ in tins, as he had before, they should be put in a device that would look like a cigarette lighter, which would also make it easy to share PEZ with others in a hygienic fashion.  Haas III then enlisted the aid of Oscar Uxa to create this new dispenser, called a “PEZ box”, or on the patent a “Pocket Article Dispensing Container”, which sold very well over the next few years.

Up to this point, PEZ was marketed solely at adults, including advertising with risqué “PEZ girls”.  They didn’t begin marketing to children until the 1950s when Haas III and co. were trying to sell PEZ in the U.S., without much success. At the urging of Curtis Allina, VP in charge of U.S. operations, they switched gears and began targeting children in the United States, including creating fruit flavored bricks, instead of just peppermint PEZ, and beginning to create character based PEZ dispensers, which were initially full body molds, rather than just heads on a uniform box base as they are today.