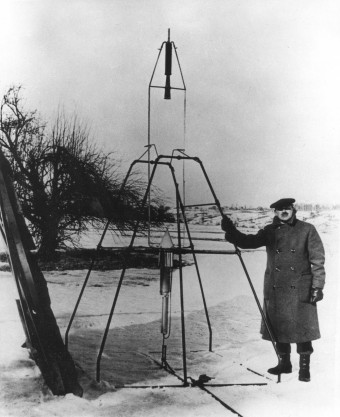 On this day in history, 1926, Robert Goddard performed the first flight test of a liquid-fuel rocket in Auburn, Massachusetts.  This gasoline and liquid oxygen fueled rocket burned for about 20 seconds before lifting off from the ground and subsequently rising to a height of 41 feet, reaching a top speed of 60 mph.  Unfortunately, the camera Esther Goddard was using to film the first flight ran out of film before the rocket managed to leave the ground, so there is no video of the event as there would have been.

Goddard recorded the following about this launch in his diary:

Even though the release was pulled, the rocket did not rise at first, but the flame came out, and there was a steady roar. After a number of seconds it rose, slowly until it cleared the frame, and then at express train speed, curving over to the left, and striking the ice and snow, still going at a rapid rate.

Goddard had been performing experiments on liquid fueled rockets since 1921.  Before this, he experimented with using a stream of rapid fire solid charges, but this proved impractical, so he switched to using liquid fuel; something he’d first thought about in a paper he wrote on February 2, 1909, but had not pursued at that time.  He was finally successfully at creating an engine for a liquid fueled rocket in 1923 and steadily improved on the design, testing it in static racks in a lab.

His initial liquid fueled rocket design had the combustion chamber at the top of the rocket with the fuel tank in the back, heavily heat shielded (as you can see in the picture).  He did it this way as he thought this would improve stability over having the thrust in the rear.  After this test flight, he realized this design didn’t actually make the rocket more stable and so modified it to put the combustion chamber in the rear of the rocket, which is more convenient.  Five years later, his rockets now looked very much as rockets look today and he began focusing on making them more stable using a gyroscopic guidance system.  He was soon successful at creating such a guidance system and on March 28, 1935, he launched his A-5 rocket to an altitude of 4800 ft., while achieving supersonic speeds on that flight.

Goddard’s dreams of someday building a device that could launch a man to the moon and beyond began all the way back in 1899, while pruning a cherry tree.  This is his account of the event:

On the afternoon of October 19, 1899, I climbed a tall cherry tree and, armed with a saw which I still have, and a hatchet, started to trim the dead limbs from the cherry tree. It was one of the quiet, colorful afternoons of sheer beauty which we have in October in New England, and as I looked towards the fields at the east, I imagined how wonderful it would be to make some device which had even the possibility of ascending to Mars, and how it would look on a small scale, if sent up from the meadow at my feet… I was a different boy when I descended the tree from when I ascended for existence at last seemed very purposive.

He later celebrated a personal holiday every October 19, his “Anniversary Day”.  His dream of using a rocket to reach the moon and beyond actually got him ridiculed in the media.  This primarily stemmed from a published report in 1920 where he outlined an experiment to shoot a rocket to the moon and then have the rocket loaded with flash powder that would ignite when it hit the moon.  This would allow people on Earth with powerful enough telescopes to see the flash and thus be able to confirm the rocket made it to the moon.  On January 13, 1920, the day after his report was published; the New York Times had the following to say about it in an editorial:

After the rocket quits our air and really starts on its longer journey it will neither be accelerated nor maintained by the explosion of the charges it then might have left. To claim that it would be is to deny a fundamental law of dynamics, and only Dr. Einstein and his chosen dozen, so few and fit, are licensed to do that.

That Professor Goddard with his “chair” in Clark College and the countenancing of the Smithsonian Institution, does not know the relation of action and reaction, and of the need to have something better than a vacuum against which to react—to say that would be absurd. Of course he only seems to lack the knowledge ladled out daily in high schools.

Of course, it was the Times’ reporter who had a flawed understanding of physics, not Goddard, who was a physics professor.  In fact, Goddard had realized this would be possible while still in high school when he read Newton’s Principia Mathematica and saw that Newton’s Third Law would allow something in the vacuum of space to be navigable.  The editor’s statement above somewhat references this law, but he fails to realize that the rocket ejecting its fuel at high speeds provides the “action and reaction” needed to provide thrust in a vacuum.

Goddard’s response to this criticism was initially not scientific at all, simply, “Every vision is a joke until the first man accomplishes it; once realized, it becomes commonplace.”

In 1924, he had a more scientific response.  He published a paper in Popular Science Monthly where he outlined an experiment he’d just done proving conclusively, for those who still doubted, that a rocket would work in a vacuum.  In this experiment, he showed that the rocket would actually work better in a vacuum.  Specifically, he ran 50 tests of a rocket in a chamber that had 1/1500 normal atmospheric pressure.  Not only did the rocket still provide thrust in this environment, but it actually provided 20% more thrust than the same setup and test done with normal atmospheric pressure.

Despite this conclusive proof, he still was often criticized on this point by the media.  It wasn’t until the day after the launch of Apollo 11, while it was on its way to the moon, that the New York Times published a retraction on their statements in 1920:

Further investigation and experimentation have confirmed the findings of Isaac Newton in the 17th Century and it is now definitely established that a rocket can function in a vacuum as well as in an atmosphere. The Times regrets the error.

Just as in the sciences we have learned that we are too ignorant safely to pronounce anything impossible, so for the individual, since we cannot know just what are his limitations, we can hardly say with certainty that anything is necessarily within or beyond his grasp. Each must remember that no one can predict to what heights of wealth, fame, or usefulness he may rise until he has honestly endeavored, and he should derive courage from the fact that all sciences have been, at some time, in the same condition as he, and that it has often proved true that the dream of yesterday is the hope of today and the reality of tomorrow.  (Excerpt from his high school valedictorian speech “On Taking Things for Granted”; delivered at the age of 21, having graduated late due to sickness)

It is not a simple matter to differentiate unsuccessful from successful experiments. . . .[Most] work that is finally successful is the result of a series of unsuccessful tests in which difficulties are gradually eliminated.