This Day in History: Samuel Byck Hijacks an Airliner with the Intent of Flying it into the White House to Kill President Nixon 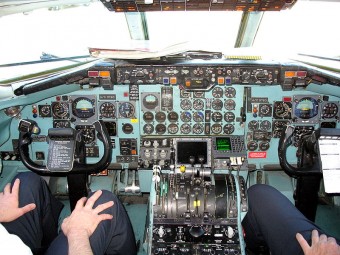 On this day in history, 1974, Samuel Joseph Byck attempted to assassinate President Richard Nixon.  Byck’s plan was to take control of an airliner and then force the pilots to fly the plane into the White House, thereby presumably killing the President who was there at the time.  Not all went as planned, of course, though he did manage to get as far as taking control of a Delta Airlines’ plane.  However, he never managed to get it off the ground.

Byck, a high school dropout and ex-army soldier, had been down on his luck for some time when he decided to try to “take back the government” for the people, by assassinating the president.  His wife had left him two years before, taking their kids as well.  He also was having trouble keeping a job and recently had been rejected by the U.S. Small Business Administration for a loan to start his own business, something he was extremely bitter about.

As such, Byck decided a revolution was needed to fix the rampant corruption he perceived, with politicians being more concerned about keeping special interests happy, rather than helping actual American citizens.  He also believed the government was conspiring with those special interest to keep people who were poor, down-and-out.

Luckily for the rest of the passengers on the plane, Nixon, and White House staffers, Byck wasn’t the sharpest tool in the shed and his plan was fairly poorly conceived in terms of its execution, more or less the “show up, and see what happens approach”.  First, Byck made a “bomb”, which more or less was just two Valvoline containers filled with gasoline, placed inside a suitcase.  Obviously this wouldn’t be the most effective incendiary device, even if he did set it off.  This would have been even less effective in that his design of the bomb didn’t actually include any sort of fuse or other means of detonating it.

The bomb wasn’t the only crowd control item he brought with him in his attempt; he also brought a gun.  Now, given he was already on the F.B.I. and Secret Service’s watch list, purchasing a gun was somewhat out of the question for him.  So, instead, he  stole a Smith and Wesson .22 caliber, six-shot gun from a friend and pocketed around 40 rounds of ammunition to take with him in his assassination attempt.

On the morning of February 22, 1974, he made his way to the Baltimore/Washington International Airport.  Once there, rather than attempt to get on the plane without drawing attention to himself, he encountered a Police Officer, George Neal Ramsburg, in the terminal and shot him in the back. This was unlucky for the officer, who died, but very lucky for the passengers as had he not done this, he may have managed to get on the plane without causing a ruckus and perhaps could have waited to hijack it until after it was in the air.

In any event, after killing Ramsburg, he ran to a Delta Airlines’ plane, a McDonnell Douglas DC-9 (which can hold around 70-109 passengers, depending on the configuration).  Byck chose this plane as it was about to depart, with passengers in the final stages of boarding.

Thanks to the fact that he decided to murder Officer Ramsburg, at Byck’s heels was another police officer, who had just come on duty and had heard the shots fired and ran to the scene.  The officer (whose name was blacked out in the official F.B.I. report, but I believe was named Charles Troyer), then grabbed Ramsburg’s .357 Magnum and chased after Byck.  He did not, however, get to Byck in time and when he first spotted Byck, he was already aboard the plane.

Once on the plane, Byck entered the cockpit and told the pilots he had a bomb and that he wanted them to take off.  Before they had a chance to respond, he pointed his gun at the co-pilot, Fred Jones, and shot him in the head.  At this point, the pilot, Reese Loftin, decided it would be a good idea to do what Byck told him to do, so he started the engines.  However, after Byck left the cockpit temporarily and then came back and again shot the co-pilot, who was already dead, and then shot Loftin in the back, he changed his mind and figured he was just dealing with a crazy person, which was a more accurate assessment given Byck’s history of mental problems and current actions. Thus, at this point, the pilot told Byck the doors needed to be closed in order for them to take off, which got rid of Byck temporarily and allowed the pilot to call for help from air traffic control.

This is the point when the officer chasing after Byck spotted him in the plane, with two stewardesses attempting to shut the door at the time.  Before they were able to, the officer was able to get a couple shots off at Byck before the door swung shut.  However, none of them connected.  Upon returning to the cockpit after having the doors closed, Byck proceeded to shoot the dead co-pilot again and also shot the pilot two more times.

Lucky for the pilot, who ultimately survived, Byck did not get the opportunity to shoot him a fourth time.  The officer that had been shooting at Byck managed to hit him at fairly close range through the aircraft door when he saw Byck stand in front of a port hole.  After being shot, Byck staggered back and the officer emptied his clip through the door.  As the officer had now run out of bullets, he left and by the time he got back other police officers that had arrived on the scene informed him that Byck was down.  When they entered the plane, they found Byck lying dead on the floor.

According to the “History” Channel, Byck was only wounded by the officer, not killed, and when he saw his attempt had failed, he instead attempted to kill himself before the officers could board the plane.  They went on to state that he said “help me” to the officers when they entered, but then died.  It should be noted, though, that him stating “help me” is not in the official F.B.I. report, which details the event, including the officers’ accounts.  The officers stated that Byck was dead when they arrived inside the plane.  The surviving pilot’s account also doesn’t mention Byck saying anything after the police entered.  Of course, he had just been shot three times and perhaps wasn’t in the best state to remember such details (though he claims to remember up to the point when the officers arrived).

Three days later, a letter arrived at the Miami News desk, written by Byck, stating his reasons for the assassination attempt:

It has become evident to me that this government that I love, dearly, will not respond to the needs of the majority of the American citizens.

Now is the time! Independent-minded citizens must take back the government before their government takes complete control of them all.

I, for one, will not live in a controlled society and I would rather die as a free-man than live like a sheep

Power to the People,
Sam Byck

If you enjoyed this article, you might also enjoy this one on a slightly more successful plane hijacking: A Man Calling Himself Dan Cooper Hijacks a Plane, Collects His Ransom, then Parachutes from it and is Never Heard from Again