February 15: The World’s First General Purpose Digital Electronic Computer is Dedicated at the University of Pennsylvania 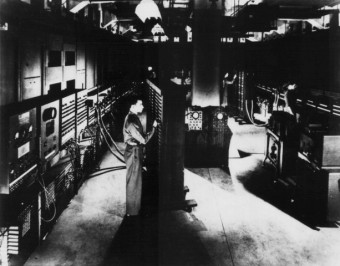 On this day in history, 1946, the first ever general purpose digital electronic computer was dedicated at the University of Pennsylvania.  The machine was called the ENIAC (Electronic Numerical Integrator and Computer).  It cost over $500,000 (around $6 million today), weighed around 57,000 pounds and took up 1800 square feet.  Further, it featured 17,468 vacuum tubes, 70,000 resistors, 7,200 diodes, 10,000 capacitors, and most impressively of all there were around 5 million joints that needed to be hand-soldered. In order to power all this, it took a whopping 150 kW of electricity. This is enough to power about 114 homes in the U.S.

ENIAC was the brainchild of several different people, most notably John Mauchly and J. Presper Eckert.  Four years before ENIAC’s auspicious debut, Mauchly wrote a memo outlining the incredible speed boost one would be able to get if, rather than relying on mechanical, moving parts, a computer was designed to use only digital electronics.  This memo came to the attention of Lieutenant Herman Goldstine of the U.S. Army, who then asked Mauchly to create a formal proposal for Goldstine to give to the army.  Mauchly did so and the army contracted with him and J. Presper Eckert on June 5, 1943 to create the machine, under the code-name “Project PX”.

There was already at this time several different other computers available, but they either weren’t built to be “general purpose” or relied on electromechanical parts, which drastically reduced the speed in which they could perform calculations.  The ENIAC was both general purpose and was a fully digital electronic computer.  One of its more impressive attributes was its ability to perform around 5,000 additions per second, or 357 multiplications per second, which was around 1000 times faster than other machines of the day.  On top of the basic mathematics calculations (add/subtract/divide/multiple/square root), it also was capable of doing conditional branches, loops, and Input/Output.  Most importantly, it was a Turing complete machine, which just means it was capable of doing anything a theoretical single-taped Turing machine can do.  For those not familiar, why this is important, in layman’s terms, is that it means that it can basically be used to solve any computational problem that is solvable (in theory, though not in practice because of the real world limits on system resources).

Its first task was to perform calculations aiding in the development of the hydrogen bomb.  More than one million I/O cards were produced for this one task, which ultimately proved to be a successful trial run.  This task was run at the behest of mathematician John von Neumann, who was working on the Manhattan project and who later accidentally lent his name to the “Von Neumann Architecture” of computers that is still commonly used today.

The ENIAC ran for about 9 months straight before being shut down for upgrades to the memory system.  It was then moved and put back together and powered back up seven months later and stayed on for the next 8 years, being used continuously, performing a variety of tasks, such as calculating artillery tables for the military and doing various calculations for aeronautics, meteorology, etc.

It should be noted that von Neumann had that particular computer architecture incorrectly named after himself due to a memo he wrote First Draft of a Report on the EDVAC on June 30, 1945 (EDVAC being the successor to the ENIAC, designed at the same school where the ENIAC was in the final stages of being completed and with many of the same people working on the project as were working on the ENIAC, including Eckert and Mauchly).  The paper was basically a synopsis, written using formal logic, outlining the ideas the group had been discussing on creating a general purpose stored program computer.  As it was meant to be more of a memo, rather than a published paper, he never mentioned the names of all the people who’d helped developed the architecture and indeed, already had done the majority of the design before von Neumann became a consultant on the project (particularly Eckert and Mauchly).

When he sent his hand written notes back to Philadelphia, Lieutenant Herman Goldstine had them typed up and distributed to the 24 people involved in the EDVAC project, listing von Neumann as the sole author, as it wasn’t intended to be distributed beyond those working on the project.  However, due to widespread interest in the report, he had it copied and sent to various other educational and government institutions, where it was further copied and spread all over the world, with von Neumann ending up getting most of the credit, though he wasn’t a major part of that project.  As such, we now call it the “Von Neumann Architecture,” even though it wasn’t really his design and would probably be more accurately called the Eckert-Mauchly Architecture.

This is to take nothing away from von Neumann who was truly an amazing individual who had a significant impact on a variety of fields including quantum mechanics, computer science, economics, geometry, and many more. (The full list is amazingly long.) He was one of the brightest people in the world, accomplishing an amazing amount in the 53 years he lived. He died of cancer, possibly due to his exposure to radiation while working on the Manhattan project.  Isreal Halperin, a mathematician who worked with him said, “Keeping up with him was impossible. The feeling was you were on a tricycle chasing a racing car.”  One of Von Neumann’s professors, George Pólya, who himself had a pretty impressive resume also stated: “Johnny was the only student I was ever afraid of. If in the course of a lecture, I stated an unsolved problem. He’d come to me at the end of the lecture with the complete solution scribbled on a slip of paper.”

“One of his remarkable abilities was his power of absolute recall. As far as I could tell, von Neumann was able on once reading a book or article to quote it back verbatim; moreover, he could do it years later without hesitation. He could also translate it at no diminution in speed from its original language into English. On one occasion, I tested his ability by asking him to tell me how The Tale of Two Cities started. Whereupon, without any pause, he immediately began to recite the first chapter and continued until asked to stop after about ten or fifteen minutes.”

When he was dying in the hospital, von Neumann also reportedly whiled away the hours with his brother by playing a game of reciting from memory the first few lines of each page of the play, Faust.

If you’re interested in more on von Neumann, I’d recommend picking up his biography: John Von Neumann: The Scientific Genius Who Pioneered the Modern Computer, Game Theory, Nuclear Deterrence, and Much More, by Norman MacRae.  It’s not the best biography in the world, in terms of how the author wrote it, but a fascinating read nonetheless and arguably the most complete single book on von Neumann.