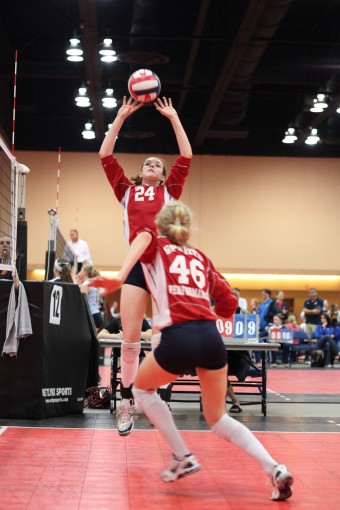 On this day in history, 1895, the first volleyball game, originally called “Mintonette” (referencing its similarity to badminton), was played in Holyoke Massachusetts at a YMCA.  The inventor of the game was the YMCA athletic director there, William G. Morgan.

Morgan had become intrigued by the recently invented game of basketball, which had been invented about four years before around nine miles from Holyoke in Springfield Massachusetts.  Basketball was invented there by Dr. James Naismith, a physical education teacher at the YMCA International Training School, which is today known as Springfield College (read more about the origin of basketball here).  The purpose of basketball was originally to create an entertaining game for young athletes that they could play indoors and would be a relatively safe game to play, in terms of making sure they didn’t get injured.  Basically, the YMCA was looking for a game that would keep athletes in shape and un-injured during the cold winter months when they couldn’t play outside.

The problem with basketball, as William Morgan saw it, was that it was extremely physically demanding to constantly run up and down the court, something older, non-athlete adults, such as businessmen, weren’t in good enough shape to do.  As such, he set out to create a game with similar goals as basketball (can be played indoors, not a terribly rough game, and would require some athletic skill and ability), but for people who weren’t in as good of shape, such as a group of middle-aged businessmen who were members at his YMCA.

He then borrowed ideas from a few different sports, such as tennis, handball, baseball, and badminton to make volleyball.  He also used the inside bladder of a basketball as the first volleyball. In the original rules:

Mintonette was first played at his YMCA and the rules were tweaked over the course of a little under a year until 1896 when Morgan wrote down the “final” rules and submitted them for review at a YMCA Physical Director’s Conference.  At that same conference at the International YMCA Training School, the first exhibition game was played between different YMCA groups.  One of the spectators of this exhibition match, Dr. Alfred T. Halstead suggested to Morgan that a better name for the sport than Mintonette would be “Volley Ball” (originally two words until 1952, when it was officially changed to one word) as obviously the game primarily consisted of volleying a ball back and forth.  Morgan liked the new name and so re-named the sport as such.

Volleyball quickly spread in popularity throughout the U.S., Canada, and the Philippines, among others, and was soon spread throughout Europe largely thanks to troops from North America playing it during WWI (16,000 volleyballs were donated to the troops, which needless to say made it a very popular game among them).  Today volleyball is one of the most popular team sports in the world and is still growing, though obviously professionally speaking, it’s still not as popular as sports such as Association Football, Baseball, Basketball, American Football, or the like.  However, the Fédération Internationale de Volleyball (FIVB) claims that it is currently the world’s most played team sport, though I should think the Fédération Internationale de Football Association (FIFA) might argue that point in favor of Association Football.