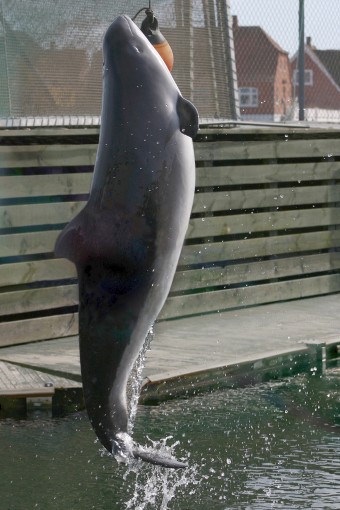 Today I found out Dick Van Dyke was once saved by porpoises when he found himself lost at sea on a surfboard.

In his younger years, Dick Van Dyke frequently spent time surfing.  In an appearance on The Late Late Show with Craig Ferguson, Van Dyke briefly mentioned one such time he was surfing using a 10 foot long-board and fell asleep on it while floating out in the ocean.

Went out once and fell asleep on the board… and woke up out of sight of land and I looked around and started paddling with the swells and I start seeing fins swimming around me and I thought, “well I’m dead.”  They turned out to be porpoises and they pushed me all the way to shore. I’m not kidding.

Bizarrely, Ferguson didn’t choose to have Van Dyke elaborate on this remarkable tale and instead proceeded to make a few slightly less than humorous jokes and then used the remaining time in the segment to have Van Dyke play a harmonica (Dick Van Dyke does not actually know how to play the harmonica).  So I can give no further details like: when did it happened (would we have missed out on is wonderful performances in Chitty Chitty Bang Bang and Mary Poppins had the porpoises not helped him out, or was this after the fact); how far out did he estimate he was after they pushed him back to shore; were they really porpoises or was Van Dyke simply making the common slip of thinking dolphins are porpoises and vice-verse; where exactly was he surfing at the time; did he fall asleep on porpoise? (ba-dop-ting)

In any event, for those curious, you can tell the difference between a porpoise and a  dolphin on sight in a few different ways.  First, porpoises have much shorter snouts that also are fairly flat at the end and easily distinguished from dolphin snouts.  Less obvious at first glance is that their teeth have more of a spade shape than the conical shape dolphin teeth have.  Porpoises also tend to be smaller than most types of dolphins.