Al Capone Had A Brother Who Was A Prohibition Enforcement Officer 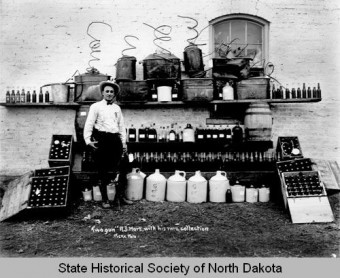 Today I found out Al Capone’s brother was a police officer who at one point was also a prohibition enforcement officer.

James Vincenzo Capone, born in 1892, was 7 years old when his infamous brother Al was born. Growing up in Brooklyn, he felt the city life didn’t suit him and decided to head out west. As such, he left the family at the age of 16 to join the circus in 1908.  Losing touch with his family, he traveled throughout the Midwest going by the name “Richard Hart”, choosing to keep people from knowing about his Italian heritage. Instead, he preferred people to think he was Mexican or Native American.

During this early period in his life, he became fascinated with guns and would spend countless hours shooting at bottles and cans, soon becoming an expert marksman. After World War I, he told people he had developed this skill serving in the infantry in France. He also said that he rose to the rank of Lieutenant and received the “sharpshooters” medal from General John J Pershing. However, later in his life, this military service was called into question by local Legionaries who asked for proof of his claims. Being unable to provide any record of actually being a serviceman, his military history is thought to have been made up.

He eventually settled in Homer, Nebraska, where he soon became Homer’s town marshal for two years followed by one year as a state sheriff. It was then that he chose to seek out more excitement by becoming a prohibition enforcement officer. This was quite ironical given the fact that his brother, Al, was at the same time rising in fame as a gangster in Chicago, particularly known for illegal smuggling of liqueur.

Mr. Hart led countless raids that ended in numerous arrests and convictions. He soon became famous for his methods in which he used disguises to enter towns undercover to bust local bootleggers. Due to his pair of pearl-handled pistols and his ability as a marksman, the papers began calling him “Two Gun Hart” after several sensational arrests. As his fame grew, he was hired by the U.S. Indian Service where he soon developed a reputation of brutality among the natives. In one incident, he killed a local Native American in a fight. After his arrest, it came to light that the Native American was a bootlegger, so all charges were dropped. Two Gun did not escape the crime Scot free, though.  The murdered Native’s family, seeking retribution, attempted to kill Hart. They were not successful, but did manage to take one of his eyes.

After several more incidents, Two Gun’s reputation was tarnished and he ended up almost blind and broke. Unable to handle his bills and facing the prospect of being penniless, Hart chose to reach out to his wealthy brother in Chicago. Initially refusing to tell his wife and children where he was going, Hart went to Chicago returning with a new suit and a roll of $100 dollar bills. Finally, after one trip in which he went to visit his mother, he revealed to his wife that his brother was Al Capone.

In 1946, near the end of Al Capone’s life, Hart allowed his son Harry to go with him to a Capone family cabin. There he was able to meet his famous uncle. Capone, who at the time was suffering from complications of syphilis, had been released from his incarceration in Alcatraz and did not have much of his memory in-tact. Less than a year later, Al would die, on January 25, 1947.

In 1952, Richard Hart died of a heart attack at his home in Homer Nebraska with his wife and son at his side. Attaining fame as a law man fighting the same criminals his brother Al called peers.