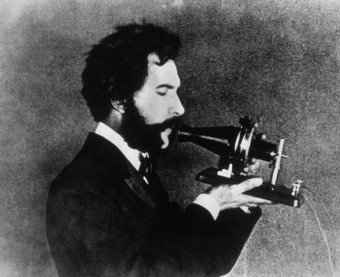 Today I found out saying “ahoy-hoy” was at one time the preferred way to answer the phone.

The very brief popularity of this telephone greeting stemmed from the fact the “ahoy-hoy” was Alexander Graham Bell’s preferred way to answer the phone.  Ahoy-hoy derives from the term “ahoy”, which is generally associated with being a nautical term used for hailing ships.  However, there is also significant evidence that it was popularly used as a way to more or less say “hello” in non-nautical situations.  Further, “hoy” was commonly used as far back as the 14th century as a call to use while driving cattle.  This precedes the first known instance of it being used in the nautical sense, attached with a leading ‘a’ sound (“a-hoy”).

The exact origins of the word “ahoy” aren’t known beyond that it stems from this Middle English exclamation, “hoy!”  The most popular theory as to the origin of “hoy” is that it derives from the Dutch word “hoi”, meaning “hello”.  An alternate widely accepted theory states that it came from the Czech word “Ahoj”, also meaning something to the effect of “hello”.  Yet another theory, albeit slightly less widely accepted, is that it stems from the Old Norse “heill”, which eventually gave rise to the Middle English “hail” and perhaps “hoy”.

Whatever the case, “Ahoy-hoy” quickly got beat out in the U.S. and many other English speaking countries by “hello”, which was Thomas Edison’s favorite thing to say when answering the phone.  The invention of the word hello is often credited to Thomas Edison, including on the popular BBC show QI (Quite Interesting), which is normally an exceptionally accurate program (and which is unfortunately not aired in the United States).  In this case, though, QI got one wrong when they stated Edison invented the word “hello”.

In fact, the first documented case of the word “hello” being used as a greeting predates Thomas Edison, appearing in The Sketches and Eccentricities of Col. Davey Crockett, which was written in 1833, about 14 years before Edison was born.  The exact quote from the text is: “Said I, ‘Hello stranger! if you don’t take keer your boat will run away with you.'”  Further, based on significant literary evidence, it would seem that by around the 1860s, “hello” had become an extremely popular greeting. This popularity also predates the invention of the commercially viable telephone device.  In addition to that, it predates the first known instance of Edison writing the word “hello”, which was in a letter he wrote in 1877 to the president of the Central District and Printing Telegraph Company of Pittsburgh, where he suggested that using “hello” was the best way to start a telephone conversation.

Similar to Graham Bell’s reason for liking “ahoy hoy”, Edison liked “hello” as a telephone greeting because it was easily heard and distinguished from other words, even over long distance transmissions (for the time).  As Edison stated, “hello” could be heard clearly on a transmission “ten to twenty feet away”.  Edison originally tested this using a prototype of Graham Bell’s telephone system.

The word “hello” also has somewhat obscure origins, though many etymologists think it came from the English “hullo” or “hallo”, which derive from “hollo”, which was an exclamation to draw attention to something.  This word, in turn, is thought to derive from “holla”, which meant “stop or cease”.  Another slightly less popular theory is that “hello” ultimately derives from the Old English “hál béo þu”, meaning “Hale be thou”, which was more or less just a way to wish someone good health.