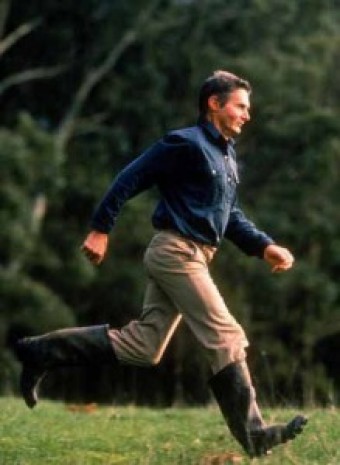 Today I found out a 61 year old potato and sheep farmer once won one of the world’s most grueling athletic competitions.

The man was an Australian by the name of Albert Ernest Clifford “Cliff” Young, who decided to take up running as a sport at the age of 57.  The competition was the Westfield run, which is an ultra-marathon that takes place in Australia.  The race is 543.7 miles long (875 km) and is run from Sydney to Melbourne.  What’s even more impressive than a 61 year old potato and sheep farmer even being able to complete such a race in the allotted time is that, he not only won, but shattered the world record for that distance, beating it by over two days.

Young showed up at the event on April 27, 1983 wearing overalls and gumboots, though he later used ten pairs of shoes during the event.  His running style, like his attire, was also very unconventional, being more of a shuffle than a run.  In the beginning, the other runners easily took the lead with Young and his slow shuffling style lagging behind.  However, unlike the other runners, Young didn’t plan on sleeping much throughout the event.  Most runners planned a schedule of about 18 hours running / 6 hours sleeping.   Young, however, didn’t feel sleep was necessary because, in his youth, he’d herded about 2000 sheep on a 2000 acre farm (about 3.12 square miles).  Occasionally that would mean rounding them up by literally chasing them around for two or three days straight with no sleep and constant running.  In his own words:

“See, I grew up on a farm where we couldn’t afford horses or four wheel drives, and the whole time I was growing up– until about four years ago when we finally made some money and got a four wheeler– whenever the storms would roll in, I’d have to go out and round up the sheep. We had 2,000 head, and we have 2,000 acres. Sometimes I would have to run those sheep for two or three days. It took a long time, but I’d catch them. I believe I can run this race; it’s only two more days. Five days. I’ve run sheep for three.”

Indeed, after the race, Young told the press he kept himself motivated and focused by imagining there was a storm coming and he was just rounding up sheep before it came.  He did, however, sleep some during the race.  On the first day, he fell and injured his shoulder and decided to take some rest.  However, due to one of his crew members not wearing his contacts when he set the alarm to wake Young up, Young ended up only sleeping two hours the first night and was up and running after that.

In the end, he completed the 543.7 mile long ultra-marathon in just five days, fifteen hours, and four minutes, while only sleeping for a little over 12 hours during that span.  When he won, Young earned a grand prize for the event of $10,000.  Young lived on a modest income of around $2000 per year and didn’t feel he needed any more money than that, so rather than keeping the winnings for himself, he split the money with certain others in the race and his support crew.  After the presentation of the prize, his legs gave out and he had to be carried off the stage.  A bed was then setup for him at the shopping center which was the destination of the race and he slept there for just five hours, followed by eating three plates of eggs and toast and spending the following day giving interviews.

Young again competed in the race in 1984, but due to injuring his left knee a couple weeks before the race and displacing his hip during the race, he couldn’t keep up with the front of the pack, led by 28 year old now legendary ultra-marathoner Yiannis Kouros.  Despite both of these injuries, Young still managed to finish seventh out of the nine who ultimately were able to complete the event.  He entered the competition for the third time the following year, but was forced to dropout due to pleurisy (inflammation of the lung tissue) and pneumonia.  He spent a week in the hospital following this before being allowed to go home.  As a courtesy, Westfield hired a car to drive him all the way back to Colac after he was released from the hospital.