Clownfish are All Born Male, a Dominant Male Will Turn Female When the Current Female of the Group Dies 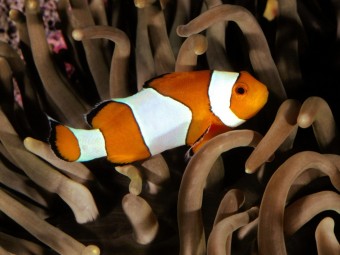 Today I found out clownfish are all born males and the dominant male of a group will turn female when the female of that group dies.

Clownfish, also known as anemonefish, are sequential hermaphrodites that first develop into males. In fact, they live in regimented schools made up of all males and just one female- the lone female being the dominant and generally the largest fish in a given group.  The second in command of the school is usually the largest, and most aggressive, male of the group. Due to his dominance of the other males, he’ll tend to ensure they stay small via taking the best food opportunities for himself and the like.  Besides the perks of more food, he’s also the only one that gets to breed with the female.

During breeding, the female will lay sometimes thousands of eggs, depending on the species and her size, usually on a pre-cleaned rock or coral close to the anemone they live in. After the eggs are laid, the male will go along and fertilize them.

From here, if a given egg is poor quality, whether damaged (i.e. Nemo) or it becomes infected by a fungus or the like, the male will typically eat the egg. Likewise, if the egg is infertile, or if the clownfish is an inexperienced breeder or stressed, he may also simply eat the eggs.

Otherwise, the male, and rarely the female, will guard the fish for the 6-10 days it takes to hatch, as well as regularly fan them, which increases the chances of the eggs successfully developing. After the eggs hatch, the parent’s job is done and they have nothing to do with the baby fish, who ascend to the surface and feed on plankton until maturation.

If the female dies, the dominate male will get first choice of food and begin to gain weight, ultimately becoming female.  She will then choose a breeding partner among the available males, which is usually the largest and most aggressive male available. At the same time, everyone else moves up one in the pecking order.  The two will pair off and breed together until something happens to one or the other, at which point the cycle begins again.

It is thought that this peculiar ability to change sex developed because, unlike many other types of fish, clownfish almost never stray very far away from their homes in sea anemones, which they form a symbiotic relationship with. Thus, if not for their ability to adapt to potentially limited mating partners in their local area, they may not get a chance to breed at all.