Origins of the Jolly Roger 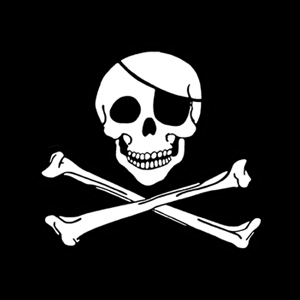 Today I found out the origins of the Jolly Roger flags.

Ships throughout history typically stocked a variety of different flags used for sending a message, signaling other ships, and for identifying themselves.  For instance, in the 17th and 18th centuries, English privateers were to fly a specific version of the Union Jack, distinguishing themselves from English naval vessels which flew a different version of the Union Jack.  Pirate ships were no different, excepting perhaps that they often carried flags for more nefarious reasons like fooling nearby ships into think they were allies until they got close enough that the other ship couldn’t escape.

The most famous flags flown by pirates to indicate they were such were all called the “Jolly Roger” and were adorned with a variety of artwork or often no art work at all.  Most of these flags were simply black or red with nothing on them.  Historical accounts indicate that, should a pirate ship raise a black flag, it indicated that so long as the ship they were attacking surrendered with no resistance, they would be given quarter.  Should anyone aboard the ship resist or should the ship try to flee once the black flag was raised, the black flag would be lowered and the red flag would be raised.  This flag indicated that no mercy would be shown to anyone aboard the ship that was about to be attacked.

Pirate ships were much more feared than other types of enemy vessels because, in resisting other enemy vessels, at any point you could surrender and be offered quarter by the traditional rules of engagement; so you could fight until losing was inevitable, then surrender.  With pirate ships though, flying the black flag, you had to surrender immediately if you didn’t think you could win.  As pirate ships rarely attacked unless they were in a good position to win, this pretty much meant that, if you encountered a pirate ship, you should probably just surrender right away.

As such, flying of any form of the Jolly Roger tended to instill the necessary fear in whatever ship was being attacked that they would surrender immediately.  In one extreme example, in 1720, famed pirate Bartholomew Roberts sailed into a harbor at Trepassey, Newfoundland with a black flag flying.  This resulted in the crews of all 22 vessels in port panicking and abandoning their ships.  Combined, Roberts would have been no match for them, but the necessary fear was invoked from seeing the black flag that they all fled without a fight.

Records of pirate ships flying flags that signified they were pirates go back just about as far as history is recorded.  Of the Jolly Roger line though, the earliest reference is probably of the skull and crossbones flag used by the Knights Templar, who had the world’s biggest naval fleet in the 13 century and were well known for their pirate-like acts on the sea.   When the Knights Templar dissolved, with many members forming the Knights of Malta who were equally known for their piracy, they also were known to fly the skull and crossbones.

The origin of the skull and crossbone flag within the Templar tradition stems from variations of this legend: “A great lady of Maraclea was loved by a Templar, A Lord of Sidon; but she died in her youth, and on the night of her burial, this wicked lover crept to the grave, dug up her body and violated it. Then a voice from the void bade him return in nine months time for he would find a son. He obeyed the injunction and at the appointed time he opened the grave again and found a head on the leg bones of the skeleton (skull and crossbones). The same voice bade him guard it Well, for it would be the giver of all good things, and so he carried it away with him. It became his protecting genius, and he was able to defeat his enemies by merely showing them the magic head. In due course, it passed to the possession of the order.”

What’s interesting about this is that the port of Sidon was known historically to be a nest of pirates.  Thus, the skull and crossbones, as a pirate flag, probably predates the Knights Templar.

In any event, as noted earlier, the skull and crossbones weren’t the only flag to be known as the “Jolly Roger”.  Traditionally, any black flag flown, even with no design on it, simply meant the ship flying it was a pirate ship and was offering quarter if the ship about to be attacked would surrender immediately.  Any red flag, whether there was a design on it or not, meant the pirate ship would attack and offer no mercy.

The earliest references to the name “Jolly Roger” goes back at least to the early 18th century, with one of the earliest documented instances appearing in Charles Johnson’s A General History of the Pyrates (1724).  In it, he references that two pirates from the early 18th century, Bartholomew Roberts and Francis Spriggs, had named their individual flags “Jolly Roger”.  These flags were quite different in appearance, so historians think that this generic name for pirate flags of all varieties was already well established.

The origin of the “Jolly Roger” name itself is thought to stem from one of the following three things.  First, that it is simply adapted from the English word “roger”, which basically just means “wandering vagabond”; indeed, another name for the Devil among the English at this time was “Old Roger” and putting a depiction of the Devil on these flags was quite common.

Another possibility comes from the 17th century French “jolie rouge”, which meant “pretty red” and, thus, was what the red flags were called.  Accounts as early as the 18th century also have the black versions of these flags being called the “Jolly Roger”.  So if “Jolly Roger” stems from this, sometime between the 17th and 18th centuries the meaning was expanded to mean all pirate flags, regardless of color.

An alternative theory comes from the fact that certain Asian pirates called their captains by the title “Ali Raja”, meaning “King of the Sea”.  It’s possible that this term was then adapted by the English for eventual usage as the name of their pirate flags.

Personally, I think the first theory stands up to Occam’s razor the best, being the simplest solution that also, indecently, makes a lot of sense.