Why a Typical Work Day is Eight Hours Long 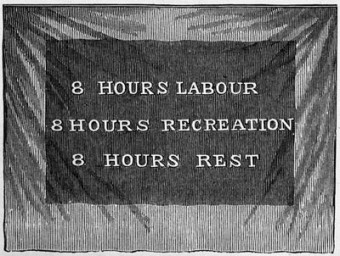 During the Industrial Revolution, companies attempted to maximize the output of their factories by keeping them running as many hours as possible, typically implementing a “sun up to sun down” work day.  Wages were also extremely low, so workers themselves often needed to work these long shifts just to get by, including often sending their children to work in the factories as well, rather than getting them educated.  With little representation, education, or options, factory workers also tended to work in horrible working conditions to go along with the bad hours.  The typical work day at this time lasted anywhere from 10-18 hours per day, six days a week.  This all began to change in the 19th century.

The first to suggest an eight hour work day for everyone was a British man by the name of Robert Owen, who was also one of the founders of socialism.  Owen felt that the work day should be divided into thirds, with workers getting equal time to themselves and to sleep as they do for work.  Thus, in 1817, he began campaigning for an eight hour working day for all workers, coining the phrase, “Eight hours labour, eight hours recreation, eight hours rest.”  Unfortunately, this did not catch on for some time, though throughout the 19th century a series of Factories Acts were passed that steadily improved working conditions and reduced work hours for factory workers.  For instance, The Factories Act of 1847  stipulated that women and children were to be granted a ten hour work day, thus only having to work 60 hours per week.

The push for a shorter work day began earlier in the United States, in 1791, with workers in Philadelphia striking for a ten hour total work day that would include two hours for meals.  By the 1830s, support for eight hour work days was shared among the majority of the working class people in the United States, but still failed to find support among business owners.  Over the next few decades, workers continued to hold strikes demanding shorter working hours and gradually things began improving.

Momentum for the cause particularly picked up with several “Eight Hour Leagues” forming in the United States, as Mann had formed in Britain around this same time.   In 1884, the Federation of Organized Trades and Labor Unions declared that May 1, 1886 would be the first day that an eight hour work day would be made mandatory.  This, of course, was neither backed by any federal mandate nor the businesses themselves and relied on workers striking and raising a general ruckus to drive the point home.  When May 1, 1886 arrived, the first ever May Day parade was held with 350,000 workers walking off their jobs protesting for the eight hour work day.

Progress was still slow though and it wasn’t until 1905 that industries began implementing the eight hour work day on their own accord. One of the first businesses to implement this was the Ford Motor Company, in 1914, which not only cut the standard work day to eight hours, but also doubled their worker’s pay in the process.  To the shock of many industries, this resulted in Ford’s productivity off of these same workers, but with fewer hours, actually increasing significantly and Ford’s profit margins doubled within two years after implementing this change.  This encouraged other companies to adopt the shorter, eight hour work day as a standard for their employees.

Finally, in 1937 the eight hour work day was standardized in the United States and regulated by the federal government according to the Fair Labor Standards Act. It stipulated that workers were not to work more than 44 hours per week and any hours over 40 required of the worker were to be paid with overtime bonuses added to their normal pay rate.