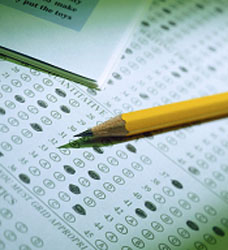 Today I found out why you used to have to use #2 pencils when using scantron forms.

Now, you might be saying, “Used to? Don’t you still have to?”  It turns out, despite what pretty much all teachers will tell you, not really.  Modern scantron systems are quite high-tech, using image sensors and sophisticated image processing algorithms.  These algorithms can even pick out which oval has the strongest mark.  So if your test is being processed by one of these newer scantron systems, you could fill out every bubble on the scantron and it would simply pick the darkest shaded bubble in each row and assign that as your answer.

As such, you can use pens, pencils, and even printer toner or ink, if you want to run your scantron through a printer to mark all your answers.  Pencils are obviously still preferred over pens, giving you the ability to erase your answer.  Also, generally speaking, you still want to use some form of grey to black colored marking device to ensure your scantron form is read perfectly. Although, anecdotal evidence has shown that even using shades of different colored ink or colored pencils will also work.  Though, at that point, the system isn’t necessarily going to read your form perfectly.  Further, if you pick a shade that is the exact color of the lines on the form, it might just ignore your markings.

On the flip-side, the early models of scantron machines were significantly less sophisticated.  They read pencil marks by shining light through the paper and Lucite light guides, which was then read through phototubes.  With this antiquated system, for an answer to be read, the light must be completely blocked out by the pencil marking to register correctly.

Graphite works well for this purpose because graphite molecules, which form tiny sheets of carbon, reflect much of the light that hits them and absorb most all the rest. It turns out, black ink isn’t opaque enough for these old scantron systems.  Further, lighter shades of graphite, such as in #3 and #4 pencils, weren’t sufficiently opaque enough for these old systems to perform without error, as is generally required.  #1 pencils would have worked fine, as they are darker than #2 pencils.  But, unfortunately, they also smudge easier when erased or accidentally rubbed with your hand as you mark the scantron form, increasing the possibility of a “false positive” when the scantron was reading your form.  So #2 pencils were just the right mix of darkness and hardness of the graphite/clay core to block the light effectively, while also not smudging too much.

One of the ways you can tell instantly whether whoever is processing your scantron is using a modern system or not is if the scantron is double-sided.  If so, it cannot be using an antiquated model, as the marks on the other side would interfere with the older system’s ability to correctly read the scantron form.  Modern systems have no such problem.