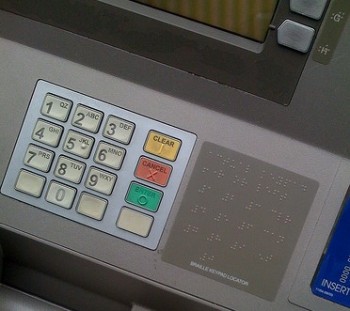 Today I found out why there is Braille on drive-thru ATM machines.

Mainly, it is because it is required by law, thanks to the ADA Accessibility Guidelines for Buildings and Facilities.  There are certain exceptions, in terms of these requirements, when it comes to drive-up ATMs vs. walk up ATMs, such as the differing requirements on the “Reach Ranges” in section 4.34.3.  However, being able to get rid of the Braille is not one of these exceptions, despite initial protests from the American Banker’s Association who argued that any visually impaired person could simply get the driver to help.  The committee in charge of coming up with these standards rejected this argument because it would no longer allow a visually impaired person to use the ATM independently.

Blind people actually do use the drive up ATMs all the time too, contrary to what many people think.  It’s not uncommon at all for them to run errands in a taxi-cab, for instance.  When they do, a drive up ATM is certainly more convenient for a blind person, given someone can drive them right up to the ATM, and they probably wouldn’t want to trust the cab driver with their card and pin number.

Up until somewhat recently though, a more interesting question would have been, “why do even walk up ATMs have Braille when many ATMs don’t have any facility for letting the blind person know what was happening on the screen?”  This situation has since been improved, but for a long time, there were no set way to make the interaction with the ATM, beyond the Braille, accessible to the visually impaired.  Initially, no one was really sure what the best way to handle this aspect of accessibility would be, so the Accessibility Guidelines didn’t address it.

Indeed, in the early days, quite a lot of banks simply provided a Braille instruction manually for a given ATM and the visually impaired user would need to follow the steps exactly to do a certain task and hope nothing went wrong or that the ATM didn’t suddenly get a software update that changed that interaction. These instructions can still be found on many ATMs, but today there also generally is some sort of audible system to let the visually impaired user know what’s happening  the screen (usually through a headphone jack, for privacy).

You’ll also often hear people say that the reason behind this has to do with being “cheaper to make one ATM machine, rather than two different models” or in a similar vein “cheaper to have one set of buttons with Braille, than one with and one without”.  This may or may not be true, but given the American Bankers Association fought to try to remove requirements to make the drive-up ATMs accessible to the visually impaired, it would seem this “cheaper” factor, if it exists, wasn’t a contributing factor.