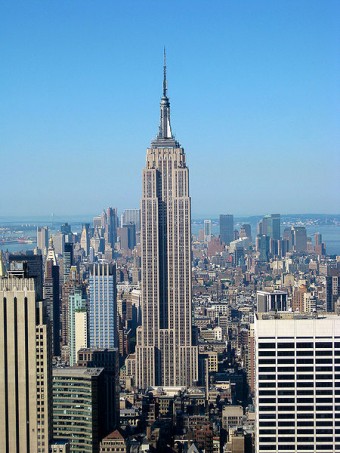 Myth: Dropping a Penny from the top of the Empire State Building is Dangerous.

You’ve probably heard people say how if you drop a penny off the top of the Empire State Building, it will accelerate to such a speed that if it struck someone, it would kill them. This simply isn’t true at all, not by a long shot. The worst that would happen if you dropped a penny from this height is that it would sting a bit when it hit them. In most cases, it wouldn’t even do that. In fact, even if you dropped it from an airplane flying at 35,000 feet, it still wouldn’t do any real damage to the person it hit.

So let’s talk specifics. The Empire State Building is about 1250 feet tall. If there were no air resistance on the penny as it fell, that would mean it would reach a maximum velocity of around 190-ish miles per hour when it hit the ground, taking just shy of 9 second to do so. That might sound really fast, but fortunately, it’s still not fast enough to kill someone.

Somewhat surprisingly, that still likely wouldn’t be fast enough to penetrate a person’s skin, especially if it hit the flat side down, instead of the edge. For reference, a relatively low-“powered” bullet (.22 caliber), which is about equivalent in mass to a penny, is shot out with an initial speed of around 600 miles per hour. That obviously will penetrate your skin at close range, but it’s because the surface area that strikes your skin is much smaller. A penny, even at that speed, wouldn’t cause that much damage as demonstrated by Myth Busters when they shot a penny at over 700 mph at a gel “skull”. The penny wasn’t even able to penetrate the gel at all at that speed, which was over three times the speed a penny would reach falling from the top of the Empire State Building with no air resistance.

So what about in real life where there is air resistance? That’s a little harder to calculate because a penny is going to be greatly affected by the wind. The updraft next to the Empire State Building can even be sufficient to make it so the penny won’t ever reach the ground near the Empire State Building, rather being caught in the swells and flying about until it is free from them.

You can even test this near your home because a penny will reach its terminal velocity in only about 50 feet. Find someplace where you can drop a penny 50 feet down and have someone waiting at the bottom to catch it (or time it to determine the velocity). They’ll have a really hard time catching it, due to the fact that it will spin and flutter about like a knuckle-ball, particularly if it’s breezy out. But if you do manage to hit them, I suspect they won’t complain. Indeed, as you can read in one of my sources, someone conducted this very experiment, dropping some pennies from a height sufficient for it to reach its terminal velocity (they chose a couple hundred feet, which was more than sufficient) and trying to catch them. One of the pennies hit a person in the chin and it didn’t even sting, it just felt like a bug had hit them. Several other pennies hit them on various places on their bodies and weren’t really felt much at all through their clothes.

If you’ve got a decent throwing arm, a less nice way to test this out without even leaving the comfort of your own home, which I in no way recommend for legal reasons, is simply to take a penny and attempt to chuck it at someone standing near you. If you’ve got a good arm at all, it’s going to reach much higher than its terminal velocity (assuming you stand close to them so it doesn’t have a chance to slow down) and you might even be able to get it to hit with the edge pointing forward for maximum speed and stinging power, which is something that isn’t likely dropped from a high height. They’ll probably not be too happy with you, but even if it hits their bare skin, it’s only going to sting a bit. Just tell them it’s !!!FOR SCIENCE!!! and try not hit them in the eye. That would hurt even if you had a weak throwing arm. 🙂

Of course, given all this, one shouldn’t take away from this that it is safe to drop all light objects from high heights. It really has a lot to do with surface area to weight ratio and how aerodynamic the thing is. Pennies will flutter about and are greatly affected by the wind. Something like a decently weighted metal fountain pen, on the other hand, could cause serious damage if dropped from a high height. It’s aerodynamically shaped and has a nice pointy end. An object like that reaching even just a hundred miles an hour can easily puncture skin and much worse. Heck, even bullets shot straight up in the air have been shown to be quite dangerous by the time they get back to the ground (not all bullets, but many). Many of these aren’t much larger, mass wise, than a penny, just shaped right for traveling through the air.