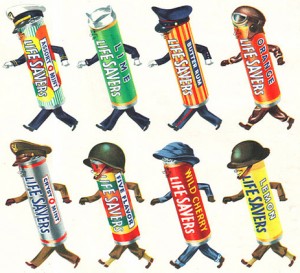 Today I fount out that all lifesavers spark when chewed, not just the Wintergreen Lifesavers (also known as Wint-O-Green).

This phenomenon has been noticed throughout history, long before Lifesavers were invented.  The English scholar Francis Bacon wrote in Novum Organum in 1620, “It is well known that all sugar, whether candied or plain, if it be hard, will sparkle when broken or scraped in the dark.”  Likewise, in the late 1700’s, sugar producers began to produce sugar crystals formed into a large solid cone.  Chunks were then broken off these large cones in various sizes to be sold to customers.  When these chunks were nipped off in low light settings, people began noticing flashes of light around the breaking points.

So what is going on here?  For the technical answer, triboluminescence occurs when molecules, such as sugar crystals, are crushed, forcing a certain amount of electrons out of their atomic fields, often forcing these electrons to jump across gaps in the crystalline structure.  This happens when stress is created in the crystals creating an electric field.  These electric fields can rip the outer electrons from the molecules. When these free electrons then bump into, say, nitrogen molecules in the air, they transfer energy to the nitrogen molecules, causing them to vibrate.   These nitrogen molecules then emit ultraviolet light, which is outside of the human visual spectrum.  There is also, though, some visible light created when the crystal molecules recombine with some of the free electrons, when they jump across the crystalline structure.  So then, most all hard sugar candy will emit anywhere from a very faint brief glow in the visible spectrum, to a relatively bright flash when crunched, depending on what other chemicals are also in the candy for the electrons to react with.

For the somewhat less technical answer, when sugar crystals are crushed, they emit an electrical discharge that can excite molecules near the discharge, such as nitrogen in the air, which will then in turn make them give off various types of light while they are in this excited state.

So why do the Wintergreen Lifesavers seem to flash so much brighter than other hard sugar candies?  It turns out, there is a fluorescent chemical flavoring, methyl salicylate (oil of wintergreen), in the Wintergreen Lifesavers.  What this means is that methyl salicylate is a substance that has the ability to absorb light at shorter wavelengths and then emit light at longer wavelengths, giving off visible light.  Basically, similar to how fluorescent lights and neon tubes work.

So when you bight into Wintergreen Lifesavers, the electrical discharge excites the nitrogen in the air, producing mostly ultraviolet light; which then in turn is absorbed by the methyl salicylate; this then emits light in the visible spectrum, creating a visible flash.   Wintergreen Lifesavers aren’t the only hard sugar based candies to contain just such a chemical though.  Many artificial flavors in hard candies will induce similar effects creating a flash in the visible spectrum, not just in the ultra-violet range.

In fact though, it’s not just sugar crystals that have this sort of thing happen.  Other crystals, such as diamonds or salt, will do the same thing with the structure of the crystal being the determining factor on whether or not it will emit light when broken; so basically, whether it is a triboluminescent crystal or not.   Crystals that aren’t typically triboluminescent tend to be ones where every unit in the crystal is symmetrically arranged around a center point.  Crystals that aren’t symmetrical like this or have impurities, tend to be triboluminescent.  Interestingly, in many types of crystals, these sparks are powerful enough to induce combustion.

Diamonds are one example of a crystal that will produce visible light.  Diamonds will in fact glow while being rubbed very vigioursly, such as while they are being ground or cut, making a red or blue color.  There are even some rocks that emit light when rubbed together using these same principles.

The Uncompahgre Ute Indians from central Colorado noticed this phenomenon with quartz crystals.  They would take clear quartz crystals collected from the mountains around Colorado and stick them in a rattle made of Buffalo Hide.  When shaken, flashes could be seen through the somewhat translucent buffalo hide.