How Lobbyists from the Auto Industry Invented Jaywalking 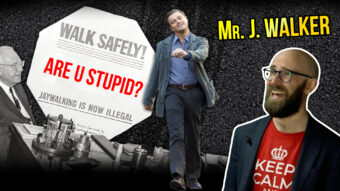 From an early age, we are all taught the fundamental rules of the road: don’t run out into traffic, look both ways before crossing, and only cross at traffic lights or a designated crosswalk. Even as adults, few of us would ever think of crossing a road just anywhere, lest we commit the risky – and often finable – crime of jaywalking. But while such rules might seem like simple common sense, less than 100 years ago they would have been unthinkable. Indeed, the very concept of jaywalking is a remarkably recent one, invented by a powerful lobby of motorists and automobile manufacturers in a bid to ensure that the car, and not the pedestrian, would be king of the road.

Prior to the Twentieth Century, city streets were communal spaces, serving as combination thoroughfare, marketplace, and playground. Pedestrians of all ages shared the streets with pushcart vendors, horse-drawn carts, and the occasional electric streetcar. They were free to cross the street wherever and whenever they pleased; the first crosswalk in the United States would not be installed until 1911, and even then most were roundly ignored. Thus, when the automobile first appeared on the scene, it was greeted not as an inevitable fixture of street life but as an unwelcome interloper and a menace to public safety. And this reputation was well-deserved: in 1923 alone, more than 17,000 Americans were killed in automobile accidents, three-quarters of whom were pedestrians. Of those killed in cities, half were children. The American public reacted to this carnage with outrage. Newspaper cartoons depicted automobiles as baby-killing monsters and motorists as scythe-wielding grim reapers, while a 1924 New York Times editorial breathlessly declared:

“The horrors of peace appear to be appalling than the horrors of war. The automobile looms up as a far more destructive piece of mechanism than the machine gun. The reckless motorist deals more death than artilleryman. The man in streets seems less safe than the man in the trench. The greatest single lethal factor is the automobile. It left shambles in its wake as it coursed through 1923.”

In response to this menace, cities across the United States mandated strict speed limits as low as 10 miles per hour, while in cases of pedestrian death judges nearly always sided with pedestrians, automatically charging motorists with manslaughter regardless of the circumstances of the accident.

This outrage – made worse by the fact that automobiles were still mainly the playthings of the ultra-wealthy – reached its crescendo in 1923 when 42,000 people in Cincinnati signed a petition calling for all cars to be fitted with mechanical regulators limiting their maximum speed to 25 miles per hour. While the petition ultimately failed, it nonetheless sent shockwaves through the automotive industry. The introduction of the Ford Model T had finally made owning an automobile attainable for the average American, and automakers feared that if cars were mechanically regulated, nobody would buy them. They therefore decided to flip the script on the American people, launching a massive propaganda campaign aimed at convincing them that it was pedestrians – and not cars – who were unwelcome on city streets. As author Peter Norton explains:

The campaign was fought on multiple fronts. The National Automobile Chamber of Commerce, an auto industry lobby group, established a free newswire service which sent basic statistics on traffic accidents to major newspapers. Whereas before automobile accidents were largely blamed on  automobiles and  drivers, the resulting newspaper articles shifted the blame onto pedestrians and called for cities to pass laws restricting them to sidewalks and crosswalks. And the cities listened, with Kansas City becoming the first to pass official ordinances regulating street crossing in 1912. At the same time, the American Automobile Association, or AAA, sponsored school safety campaigns and poster contests aimed at teaching children to follow these newly-imposed traffic rules.

But the auto industry knew that laws and school programs were not enough. Cities had passed street-crossing laws before, and pedestrians had roundly ignored them. Furthermore, most police departments were too understaffed or overworked to handle such massive volumes of minor offenders. One person who understood this better than most was E.B. Lafferts of the Automobile Club of Southern California, who in a 1927 speech explained:

“We have recognized that in controlling traffic we must take into consideration the study of human psychology, rather than approach it solely as an engineering problem.”

In order to get American pedestrians off the streets once and for all, Lafferts turned to a weapon more powerful than any law or educational program: shame. All across the country, inventive and often cruel campaigns were organized to humiliate those who dared cross anywhere other than a crosswalk. In San Fransisco and Detroit, children and adults alike were pulled into mock outdoor courtrooms and publicly judged by a crowds of onlookers, with one 12-year-old being sentenced to clean chalkboards for a week. In Syracuse a department store hired a man in a Santa Claus costume to stand on a street corner with a megaphone and yell at unsafe crossers, while in Grand Rapids, Boy Scouts were posted at intersections to hand out special cards to offenders. These cards explained that while crossing the street diagonally or away from an intersection might have been safe in the horse-drawn era, this was a new automotive age and the rules had changed. In other cities, police were encouraged to publicly shame offenders and even carry women back to the sidewalk rather than just quietly fine them. Other campaigns were even more extreme. In some cities actors were hired to don 19th-century clothing or even clown costumes and illegally cross the street, driving home that this was an outmoded, foolish practice. In one 1924 New York demonstration, a clown was repeatedly run over by a slow-moving Ford Model T.

But perhaps the automotive lobby’s most ingenious and effective tactic was to coin a new term for unsafe street crossers: jaywalkers. While the word seems inoffensive today, at the time “jay” meant a “rube” or “country bumpkin,” and by extension jaywalkers were likened to unsophisticated country dweller who became so mesmerized by the lights and sounds of the big city they would wander into the street and disrupt traffic. The term caught on immediately and spread like wildfire, gleefully spurred on by the automotive industry. The Packard Motor Company built tombstones engraved with the name “Mr. J. Walker,” while in Buffalo beachgoers were treated to the spectacle of a jaywalker being arrested, handcuffed, and fitted with a sandwich board reading “I am a jaywalker.” Pedestrians tried to retaliate with competing names for reckless motorists like “joy rider”, “jay driver,” and “flivverboob,” but none caught on as universally as “jaywalker.” Everywhere one message drowned out all others: the road belonged to the automobile.

And it worked. In only a few years, the narrative around auto accidents had been completely turned on its head, and newspaper articles that once demonized motorists for pedestrian deaths now almost exclusively blamed errant jaywalkers. As Peter Norton explains:

“The campaign was extremely successful, It totally changed the message about what streets are for.  In the early days of the automobile, it was drivers’ job to avoid you, not your job to avoid them. But under the new model, streets became a place for cars — and as a pedestrian, it’s your fault if you get hit.”

In 1928, auto industry groups took control of a series of meetings convened by then-Secretary of Commerce Herbert Hoover to create a model set of traffic laws that could be applied to any municipality. Using the 1925 Los Angeles Traffic Code as a model, the Federal Government created the 1928 Model Municipal Traffic Ordinance. The result was a new car-centric social order in which the street, once a communal space open to all, now belonged exclusively to the automobile. It is the same system we live under to this day.

A dramatic example of how far the narrative has shifted since the early 20th Century came in 2011 when Raquel Nelson, a resident of Marietta, Georgia, stepped off a bus with her two children and began to walk home. As it was late in the evening and the nearest crosswalk was nearly a third of a mile away, Nelson attempted to cross the busy street at the bus stop. She and he children were struck by an onrushing van, and her 4-year-old son, A.J, was killed. Despite the fact that the driver of the van had alcohol and painkillers in his system and two prior hit-and-runs on his record, Nelson was charged with second-degree vehicular homicide, reckless conduct, and crossing a roadway in an inappropriate manner – AKA jaywalking. Together, these charges carried a penalty of up to three years in prison. In the end Nelson was sentenced to 12 months probation while the driver plead guilty to fleeing the scene and served only six months in prison. It was not until 2013 that the Vehicular Homicide charges were finally dropped, and Wilson was ordered to pay a $200 fine for jaywalking alone.

More than 100 years after its invention, the crime of jaywalking continues to be widely enforced across the United States, with Los Angeles issuing more than 17,000 jaywalking tickets between 2011 and 2015. These tickets carry a fine of up to $197. Other countries are even stricter: in Singapore, jaywalking carries a penalty of up to a $1000 fine or even a six-month jail term. But as petty and annoying as they might seem, these laws at least help keep pedestrians safer, right? Well, actually no. In the UK, where jaywalking is not a crime, the rate of pedestrian death rates is only 0.74 per 100,000 inhabitants compared to 1.42 in the United States. Furthermore, a 1988 study conducted in Seattle revealed that the vast majority of pedestrians killed in traffic accidents are children, the elderly, and the intoxicated, not able-bodied jaywalkers. As John Moffat, former commander of Seattle’s traffic police explains:

“Are they the ones ending up in the morgue or in hospital? The answer is no, and the reason is that most of them are pretty fleet of foot and agile.”

Another study, conducted by New York University’s Langone Medical Center, was even more revealing: it found that of those pedestrians injured, 44% had used a crosswalk, while only 23% had been struck while crossing between intersection. Other studies have found that crosswalks are no safer than unmarked zones. Taken together, these statistics indicate that crosswalks offer little in the way of added safety, and that the majority of pedestrian collisions are the result of reckless drivers, not jaywalkers. These facts play into a larger controversy regarding transport inequality in the United States, with police in many cities being accused of using jaywalking as an easy means of raising municipal funds and of overwhelmingly targeting people of colour and other marginalized groups left out of the country’s car-centric transport system. Indeed, a Department of Justice report on the city of Ferguson, Missouri, revealed that 95 percent of those cited for jaywalking are black.

But change may be just around the corner. Around the world grassroots pedestrian organizations like 20’s Plenty for Us in the UK are working to lower residential speed limits to reduce pedestrian fatalities, and reimagining urban design to be more pedestrian friendly. One recent success story is New York’s Times Square, whose redevelopment as a pedestrian plaza has resulted in a marked decrease in injuries and noise pollution and a surge in local foot traffic. Perhaps someday in the not-so-distant future, the street will no longer be the exclusive domain of the automobile but return to their original function as communal spaces open to all.

Mangla, Ravi, The Secret History of Jaywalking: The Disturbing Reason it was Outlawed – and Why We Should Lift the Ban, Salon, August 20, 2016, https://www.salon.com/2015/08/20/the_secret_history_of_jaywalking_the_disturbing_reason_it_was_outlawed_and_why_we_should_lift_the_ban/