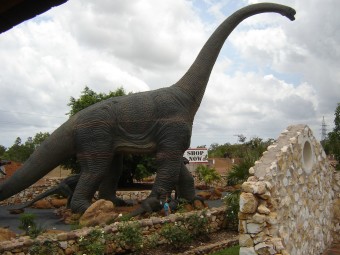 As children, we went through school learning the fascinating facts about dinosaurs that roamed the earth millions of years ago. We studied the Tyrannosaurus rex, the Stegosaurus, and the beloved Brontosaurus. What many of us may have never learned, however, was the controversy of the giant gentle Brontosaurus. Did it really exist? Well…kind of, but not really.

In the late 1800s two paleontologists, Edward D. Cope and Othneil C. Marsh, were on the hunt to discover fossils of extinct species. While the pair started off as friends, their individual egos and determination to be the first one to discover, and scientifically name, new fossil species of prehistoric animals, including dinosaurs, drove them apart and made them competitors. In their desperation to outdo each other, Marsh and Cope sacrificed accuracy in their work.  The Brontosaurus became a victim of their feud.

In 1877, Marsh discovered an incomplete skeleton for a new type of dinosaur which he named the Apatosaurus.  Two years later, Marsh discovered the nearly complete skeleton of what he thought was another new dinosaur species. Among the few bones missing was the skull. Unable to move forward with a headless dinosaur and fueled by his desire to beat his competitor, Marsh snatched up the nearest skulls he could find that could match the magnitude of his new creature (not giving much thought to the fact that one head was found four miles away from the original dig site and the other skull was found 400 miles away, oh yeah, and the skulls he found were already matched with another type of dinosaur called the Camarasaurus). Thus the brontosaurus was born.

Upon further study, scientists soon realized the similarities between the Brontosaurus and the Apatosaurus. Both were herbivores, fairly large in size, and had long necks and long whip-like tails.  As a result, they determined that the Brontosaurus was not a stand-alone dinosaur but actually the adult specimen of the previously discovered juvenile Apatosaurus skeleton. Based on the rules that govern the scientific naming of animals, scientists kept Apatosaurus as the official name of the species because it was published first. Even though the name Brontosaurus was more widely known and used, it remains merely a synonym of the Apatosaurus.

Although many scientists questioned the validity of the Apatosaurus/Brontosaurus skull, it wasn’t until the 1970s that two scientists managed to prove it.  The proper Brontosaurus/Apatosaurus skull actually had a slightly longer snout and looked a lot like the skull of another sauropod called Diplodocus.

So, did the Brontosaurus really exist? Depends on who you talk to and how picky you want to be. Although Apatosaurus is considered to be the official scientific name, Brontosaurus and Apatosaurus are merely two different names for the same dinosaur.