Dance Until You Die: The Perverse Depression-Era Fad of Dance Marathons 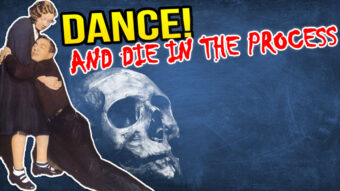 The “Roaring 20s” were a time of liberation and experimentation in America. In the wake of the First World War and the Spanish Flu pandemic, which collectively killed more than 100 million people worldwide, Americans were eager to break free of the moral and social constraints of the past and experience every pleasure and thrill life had to offer. Women smoked, drove cars, and flaunted their sexuality, unmarried couples did the previously unthinkable and danced in public, and everyone drank alcohol in record amounts – Prohibition be damned. This spirit of hedonism and wild abandon also made the 1920s one of the most fad-obsessed decades in history. Music and dance crazes like Jazz and the Charleston swept the nation, while the recent revival of the Olympic Games fuelled a national obsession with world records and endurance events, from marathon footraces to the decidedly more bizarre fad of flagpole sitting. But few 1920s crazes can compare to the sheer insanity of dance marathons. These gruelling ordeals, in which couples danced near-continuously for days, weeks, or even months for cash prizes, started out as just another harmless fad. But by the time of the Great Depression, dance marathons had become grim, exploitative spectacles whose participants, driven by sheer desperation, danced to the point of insanity, collapse, or even death.

Like most 1920s fads, the dance marathon craze was started by a single trend-setter. In 1923, New York dance instructor Alma Cummings waltzed around Manhattan’s Audubon Ballroom for 27 hours straight, outlasting six dance partners and wearing through the soles of her shoes in the process. Within three weeks, her record was broken at least nine times across the country, kicking off a national trend. Soon dance marathons began popping up everywhere – in big cities and small towns, in dance halls, churches, arenas, and even New York’s Madison Square Garden. While the details varied from event to event, a standard format soon emerged. The basic rules were simple: contestants had to dance in couples, had to remain in continuous motion, and had to stay on their feet; as soon as someone’s knees touched the ground, they were eliminated. While couples were encouraged to dance actual steps throughout, this quickly became unsustainable and a simple back-and-forth shuffle became the bare minimum needed to remain in the contest. Music was played throughout to keep everyone energized, typically on a gramophone during the day and by live bands at night. For 15 minutes every hour, contestants were allowed to leave the dance floor to rest, use the bathroom, or eat meals, which were served up to 12 times a day. Some events even provided doctors to treat blisters and other injuries or masseuses to massage the dancers’ feet. But once those 15 minutes were up, it was right back to dancing, during which contestants often carried out daily tasks like writing letters, reading the newspaper, bathing, and even shaving, using a mirror hung around their dance partner’s neck. Some contestants even learned to sleep upright, cradled in their partner’s arms.

These bizarre spectacles drew in massive audiences, who eagerly paid the 25 cent admission fee night after night to gawk at the dancers and cheer on their favourite couples. One 1928 New York City marathon attracted nearly 12,000 spectators every day and was avidly followed by millions more in the newspapers. But as watching exhausted people sleepily shuffle around a dance floor quickly grew tiresome, marathon promoters began coming up with creative ways of mixing up the program. Emcees would keep up a rapid-fire banter to urge on the contestants and keep the spectators entertained, occasionally announcing snap sprint races or “derbies” where the music suddenly sped up or “silver showers” where spectators were encouraged to throw coins at the dancers. Other attractions included raffles, mud wrestling, audience votes on favourite contestants, and mock weddings between dancers. During some marathons the rest periods were progressively cut down from 15 to 10, 5, and finally zero minutes, causing contestants to drop like flies. Like today’s reality TV and professional wrestling, dance marathons became a perverse mixture of fantasy and reality, with emcees fabricating elaborate backstories and rivalries between contestants, hiring professional dancers to pose as amateurs, or even paying contestants to fight each other for the sake of maximizing drama. Adding to the surreal atmosphere, contestants could even be sponsored by companies, who paid to place their logos on the backs of the dancers’ clothes. What began as an innocent fad soon grew into a profitable – and highly exploitative – cottage industry, employing at its height an estimated 20,000 people nationwide. Successful promoters became infamous for travelling through small-town America organizing marathons, only to skip town once the bill was due.

Like any sport, dance marathons attracted their share of fanatical devotees, none more so than Callum DeVillier, a hairdresser from Lanesboro, Minnesota. During one 1928 marathon held in Brainerd, Minnesota, De Villier and partner Vonnie Kuchinski danced for a mind-numbing 443 hours or almost 19 days straight. But even this superhuman achievement would be topped just four years later at a particularly legendary marathon in Somerville, a suburb of Boston. Dancing 24 hours a day, with only 15 minutes’ rest every hour, DeVillier and Kuchinski outlasted their competitors for a staggering 157 days from December 1931 to June 1932, clinching the $1,000 top prize (about $20,000 today). So proud was DeVillier of his achievement that his tombstone, which he designed himself, reads:

Yet DeVillier’s feat went largely unnoticed by the record-keeping communities, his achievements being misattributed to other dancers. It was not until the end of his life that DeVillier contacted Guinness World Records to set the record straight. But in the 1970s Guinness changed their guidelines to define marathon dancing as being nonstop, causing DeVillier and Kuchinski to be expunged from their records.

DeVillier’s pride in his achievements, however, conceals the brutal, almost dystopian reality of dance marathons, which one contemporary newspaper described as “a macabre modern equivalent of a homicidal Roman gladiatorial spectacle”. For as the contest dragged on over days, weeks, or even months, the contestants’ ordeal went from merely exhausting to downright nightmarish. When break periods were announced, dancers would often fall unconscious into waiting cots, only to be jolted awake 15 minutes later by the blast of an air horn. Those who could not be roused were slapped, given smelling salts, or dumped in tubs of ice water to get them back on their feet. In the final hours of a marathon it was not uncommon for exhausted contestants to collapse from exhaustion right on the dance floor. Some even died, including 27-year old Homer Morehouse of North, Tonawanda, New York,  who in 1923 dropped dead of heart failure after dancing for 87 hours straight. Marathon dancing also took a terrible toll on the mind. After six or seven days of sleep deprivation, contestants sometimes began to hallucinate, with some being reported picking imaginary flowers from the dance floor or fleeing from imaginary phantoms. In 1928, a Seattle woman named Gladys Lenz was punched in the jaw when her exhausted dance partner suddenly turned psychotic. Tragically, Lenz fared little better; after dancing for 19 days straight and only placing fifth, she committed suicide.

Lenz’s death shocked the Seattle authorities, prompting the city to pass an ordinance banning dance marathons within city limits. Other cities soon followed suit, including Tacoma, Boston, and New York, whose Board of Health shut down a massive marathon at Madison Square Garden at its 428th hour after a 21-year-old contestant collapsed and began vomiting blood. In addition to the physical and psychological risks, many opposed dance marathons on moral grounds, seeing the events – and dancing in general – as a corrupting influence on society. Movie theatres and other entertainment venues, fearing competition, also joined in the condemnation of dance marathons. But just as Prohibition failed to curb alcohol consumption, these bans did little to dampen the dance marathon craze, which simply moved underground or outside city limits. Many of these events also rebranded themselves as “walkathons” in order to appear more benign – a term which survives to this day.

Yet for all the physical and psychological ordeals marathon dancers were willing to endure, the cash prizes were relatively paltry: rarely more than $500 to $1000. Even the longest dance marathon on record, which lasted a mind-boggling 2,831 hours, offered a top prize of only $2,650 – or around $38,000 in today’s money.  Why then, did people willingly subject themselves to such torture? To begin with, as with marathon races, long-distance swimming, flagpole sitting, and other popular 1920s endurance events, the appeal of marathon dancing lay in discovering just what the human body was capable of, and the thrill and glory of pushing oneself to the limit and coming out victorious. There was also, of course, the perennial lure of fame and celebrity – fleeting as it was. But as the shadow of the Great Depression fell across the world and millions of Americans lost their farms, their homes, and their livelihoods, dance marathons acquired a grimmer appeal. For as gruelling and degrading as they could be, for desperate, unemployed Americans dance marathons offered the opportunity to have a roof over one’s head and several free meals a day, as well as a slim chance of winning a prize worth more than the average farmer or worker made in a year. All one had to do was keep dancing. And for the spectators, many of whom were jobless and homeless themselves, the perverse spectacle of dance marathons presented a rare opportunity to gawk and jeer at people worse off than themselves. The dance marathon thus became a grotesque mirror of the despair and desperation of Depression-age America, infamously immortalized by Horace McCoy’s 1935 novel They Shoot Horses, Don’t They?

By the outbreak of the Second World War, however, the dance marathon craze had all but died out. Not only were people increasingly unable to afford the entrance fees, but with the country gearing up for War, more and more people were returning to work and had little time to watch dancers shuffle endlessly around a dance floor. The dance marathon phenomenon remained all but forgotten until 1969, when director Sydney Pollack’s film adaptation of They Shoot Horses, Don’t They? brought it back into the public consciousness. Inspired by the film, in 1973 students at Penn State University held a “clean” fundraising version of a dance marathon with the contest duration capped at 30 hours. The event was a success, raising $2,000 for children with disabilities and inspiring dozens of other Universities including Northwestern, Pennsylvania State, Ohio State, and the University of Iowa to start their own charity dance marathons. Such toned-down contests, as well as the less-strenuous walkathon, remain popular fundraising events to this day.

During its brief heyday, the bizarre phenomenon of the dance marathon managed to encapsulate both the heady, freewheeling spirit of the Roaring Twenties and the grim desperation of the Dirty Thirties. So if you think the degrading, manufactured spectacle of reality TV is a new phenomenon, think again. And the next time your child comes home seeking pledges for the school walkathon, remember that this seemingly harmless activity originally started as the jazz-age equivalent of Squid Game.