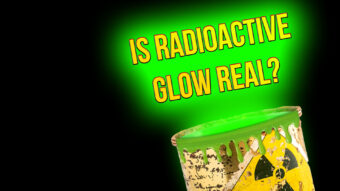 If I were to ask you to picture “radioactive waste,” the image that would likely spring to mind is that of a rusty metal barrel leaking glowing, neon-green sludge. It is an image which has appeared in countless movies and TV shows, yet, as we saw in our previous video How Does Nuclear Waste Disposal Work, real nuclear waste looks nothing as exciting as its fictional counterpart, consisting mainly of rather plain-looking rods of depleted Uranium pulled from nuclear reactor cores. So then, how did the image of glowing green sludge come to dominate our collective perception of radioactivity?

Many natural ores of Uranium like Autunite and Saleeite are fluorescent and phosphorescent, meaning that they will glow brightly under ultraviolet light and continue to glow in the dark for some time after first being charged in sunlight. Indeed, until the start of the Manhattan Project in the early 1940s, the main use of Uranium in industry was as a pigment for colouring ceramics and glass. Uranium glass, also known as vaseline glass or Depression glass, was extremely popular during the 1930s and glows bright “radioactive” green under ultraviolet light.

But while none of these natural Uranium compounds emit light spontaneously or continuously, it was their unique fluorescent and phosphorescent properties which lead inadvertently to the discovery of radioactivity. In 1895 German physicist Wilhelm Röntgen was experimenting with an electrified gas-filled apparatus known as a Crookes tube when he discovered that the tube emitted invisible rays which could make fluorescent materials glow, develop photographic emulsion, and penetrate all kinds of materials – including human flesh. Röntgen called them “X-rays,” “X” standing for “unknown.” A year later, French chemist Henri Becquerel began experimenting with salts of the element Uranium, suspecting that their fluorescent and phosphorescent properties were in some way related to Röntgen’s mysterious X-rays. To test his hypothesis, Becquerel wrapped photographic plates in opaque black paper, placed samples of Uranium salt on top of them, and left them in the sun for several hours. As expected, when he developed the plate, invisible rays emitted by the salts were recorded as perfect outlines on the emulsion. On February 29, 1896, finding the sky too overcast for his experiments, Becquerel placed a plate and salt samples in his desk drawer and left them there overnight. When he returned the next day and developed the plate, to his surprise the exposed outlines still appeared in the emulsion – even though the Uranium salts had been stored in complete darkness. Further experiments confirmed the phenomenon: no matter how long the salts were left in darkness, they continued to emit their mysterious rays at the same intensity. Becquerel could only conclude that these rays had nothing to do with sunlight and phosphorescence and were a property inherent to the salts themselves. Soon similar rays were discovered emanating from other elements such as Thorium. But it would not be until 1898 that Polish-French scientist Marie Curie and her husband Pierre gave a name to this phenomenon: radioactivity. For these discoveries, the Curies and Becquerel would share the 1903 Nobel Prize in physics.

The Curies’ continued investigations into radioactivity lead them to discover that the total radioactivity emitted by pitchblende, a common ore of Uranium, couldn’t be accounted for by the Uranium content alone. Other, even more radioactive elements, they concluded, must be lurking within the ore. After more than a decade of work in a leaky shack on the grounds of a Paris university, in which the Curies painstakingly processed literal tonnes of pitchblende, the pair finally managed to isolate two new radioactive elements: Radium, from the Latin for “ray,” and Polonium, after Marie Curie’s homeland of Poland. Beyond having a couple duels fought over her in the interim as we’ve previously discussed, Marie Curie would come to be awarded the Nobel Prize in chemistry in 1911 for this feat, becoming the first and only woman to win not one but two Nobel prizes and the only person to win in two different scientific disciplines.

While Polonium, with its short half-life of 138 days, had no immediate commercial application, the discovery of Radium unleashed a scientific and cultural craze. After noticing that the rays emitted by Radium could kill human tissue, Marie Curie developed the element into a new treatment for cancer. This procedure, known as brachytheraphy, involved implanting small needles or seeds of Radium close to a tumour so its radioactive emissions would kill the cancerous cells and leave the healthy tissue largely unharmed. This technique is still used to this day, though Radium has been replaced by other, relatively safer elements such as the gas Radon.

But by far Radium’s most successful commercial application was Undark, a luminous paint invented in 1902 by American inventor William J. Hammer. Undark consisted of Radium carbonate mixed with a paint binder and Zinc Sulfide, a phosphor which converts the alpha particles emitted by the Radium into a continuous glow perfect for painting watch and clock dials. Various pigments can be added to the paint to change the colour of the light, the most common being copper, which imparts an eerie neon-green glow. Unfortunately Hammer failed to patent his invention, allowing American physicians Dr. Sabin von Sochocky and Dr. George Willis to found the Radium Luminous Material Corporation in 1914. America’s  entry into the First World War in 1917 – and the demand for luminous dials for soldiers’ wristwatches this created – lead to an explosion in business, and by 1921 the company – now known as the U.S. Radium Corporation – was processing some 360 tons of Uranium ore every year at its Orange, New Jersey factory – three tons being needed to extract a single gram of Radium. Around this time other firms also began producing Radium paint, including the Standard Chemical Company under the brand name “Luna,” and the Cold Light Manufacturing Company under the name “Marvelite.”

But the Radium craze went far beyond such practical applications as medicine and luminous paint. The public was enraptured by the mysterious, invisible energy emitted by Radium and saw it as a panacea which could impart youth, energy, vitality, and long life. Manufacturers thus scrambled to include Radium in as many different consumer products as possible, including face creams, bottled water, razor blades, and even condoms. Advertisements for these products emphasized the “youthful glow” the Radium would impart upon its users.

But as you can imagine, placing a highly-radioactive element in consumer products was not the wisest idea, and the dark side of this craze soon began to reveal itself. One highly-publicized case was that of Eben Byers, a wealthy industrialist and amateur golfer who in 1932 died of radiation poisoning and bone necrosis after consuming copious amounts of Radithor, a patent medicine consisting of Radium dissolved in water. But the worst affected by the craze were the Radium Girls, young women hired by firms like U.S. Radium to paint the dials on watches and clocks. While the workers who extracted and purified the Radium did so using protective equipment, the dial painters were told that the paint was perfectly safe, and would often sharpen the points of their paintbrushes with their lips or paint their nails and teeth for fun, absorbing massive amounts of Radium in the process. This resulted in the girls being stricken with a variety of ailments including acute radiation syndrome, aplastic anemia, and a particularly gruesome affliction known as “radium jaw,” in which radium trapped in the jawbone caused it to rot and fall off. By 1924, 50 women who had worked at the plant were seriously ill, and 12 had died. While the company attempted to smear the women by claiming their symptoms were due to syphilis and other sexually-transmitted diseases, in 1938 five surviving Radium girls successfully sued U.S. Radium for damages. One key piece of evidence in the trial was the fact that Dr. Sabin von Sochocky, co-founder of U.S. Radium, had himself died of Radium exposure in November 1928. This ruling lead to the passing of the Occupational Disease Labor Law, one of the first such laws mandating safe work conditions and proper protective equipment – and for more on this incredibly fascinating and tragic tale, please see our previous video “Glowing in the Dark – The Radium Girls.”

Despite these dangers, however, Radium paint continued to be produced for another three decades, with millions of luminous watches, clocks, and aircraft instrument dials being produced during WWII alone. As most ordinary people’s primary exposure to radioactivity for decades, Radium paint likely helped cement the association between radiation and a sickly green glow in the public imagination. Eventually, however, the health risks lead to Radium being phased out of use in clocks and watches, with production finally ending in 1978. In the 1960s Radium was replaced in luminous paint by the less-dangerous element Promethium, while today the role has been taken over by Tritium, a radioactive isotope of Hydrogen produced in nuclear reactors. Tritium or “beta” lights consist of a sealed glass or plastic tube filled with Tritium and lined with a phosphor that converts the emitted beta radiation into light. As with Radium paint a number of dyes can be added to change the colour of the light, the most common still being green and blue as the human eye is most sensitive to those wavelengths. Beta lights are used in a wide variety of products, including watches and clocks, emergency exit signs, compasses, and gunsights. A large number of Radium-painted clocks and watches also remain in existence, but due to the alpha particles from the Radium progressively damaging the Zinc Sulfide phosphor, the vast majority no longer glow. They are, still however, nearly as radioactive as the day they were made, Radium having a half-life of 1600 years.

While Radium paint was likely the main source of the “green radioactive sludge” myth, there is another potential influence, as under certain circumstances radioactive material can produce light without the help of a chemical phosphor – though this light is typically blue, not green. This phenomenon was first observed by Marie Curie in 1910 when she noticed that a concentrated solution of Radium in water emitted a faint blue glow. This same glow later appeared in the cores of water-cooled nuclear reactors and around spent fuel rods placed in cooling ponds after removal from reactor cores. In the 1930s, this phenomenon was investigated by Russian physicists Pavel Cherenkov, Igor Tamm, and Ilya Frank, who determined that the glow was caused by radioactive particles travelling faster than the speed of light in water. While according to Einstein’s Theory of Relativity nothing can travel faster than light in a vacuum – 300 million metres per second – the speed of light through a physical medium such as water can be considerably lower. In radioactive decay and nuclear fission, particles are often accelerated past the speed of light in the surrounding water, and as they pass through they excite the water molecules, causing them to emit light. This is analogous to an object travelling faster than the speed of sound in air and generating a sonic boom. For their work, Cherenkov, Tamm, and Frank were awarded the 1958 Nobel Prize in physics, and the blue glow was named Cherenkov Radiation in Cherenkov’s honour.