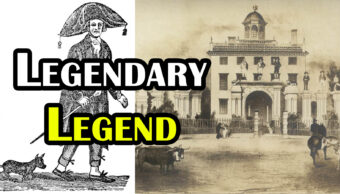 In the vast annals of history it can’t surprise anyone that the occasional great man gets lost as records of them are sparse, or were all burned by some rival empire. It is surprising, though, when there are men of whom there is possibly TOO much evidence who still disappear from most historical records. One of America’s first eccentric rich guys, Lord Timothy Dexter, first in the East, the first in the West, and the greatest philosopher in the Western World, is just such a man. If you haven’t heard of Timothy Dexter before now, then oh boy are you in for a treat.

Dexter was born just north of Boston, Massachusetts in 1747 to a modest family of tanners. While you may think sunbathing isn’t a great way to make money… it isn’t, obviously, unless you’re an Instagram model or using this tried and true method of being half naked to snag a rich spouse. The other tanning of making leather from hides, wasn’t a great way to make money, either. Enough to make a living, sure, but certainly not enough to make the kind of fortune an ambitious man like Timothy Dexter would need.

Naturally, he decided to go the route of marrying rich- specifically marrying the gloriously named Elizabeth Frothingham, and immediately started his future career of making insane business decisions. The American Revolutionary War was going on, and the Continental Congress had begun to print its own money to pay its troops. Most people could see that this money was ultimately based on nothing, and therefore entirely worthless. So prevalent was this idea that a common phrase at the time was the dismissive “It’s not worth a Continental.” Timothy Dexter, however, thought that America was 100% for sure going to work out, and would never cheat its soldiers by giving them worthless currency. At the time, Dexter snatched up Continental Dollars for literally fractions of a penny each, which, as it turns out, would be the only way to make them valuable. After the ratification of the Constitution, Alexander Hamilton convinced congress to honor Continental Dollars at 1% of their face value. Certainly a massive loss to the soldiers paid in the worthless paper, but a massive boon for Timothy Dexter since 1% of a dollar is one penny, and, basic math fact here, that is more than a fraction of a penny.

Timothy Dexter was now quite wealthy, and to rub it in everyone’s faces he bought property in the middle of the richest neighborhood he could find and began construction of an ostentatious mansion. Now, usually a word like “ostentatious” can only be subjective, but in this rare instance I think there may be a case that the house was objectively ostentatious. It was so over-the-top that Elizabeth Frothingham decided to move out of the house into another house in the general vicinity.

The mansion, unusual in its design from the get go, was surrounded by massive wooden statues of men Dexter considered to be heroes from American Revolutionaries, like George Washington, to a wide variety of Frenchmen he considered brothers in arms. Dexter was so enamoured by the French that he even gave a speech in French in one instance, despite the fact that, in his own words, “The public, considering the small chance I have had to learn French, are a little surprised to hear of my having endeavored to speak it.” Under a statue of Thomas Jefferson, Dexter commanded a painter to write “Author of the Constitution.” When the Painter wrote “Author of the Declaration of Independence” and insisted that was correct, Dexter became so irate he pulled a gun and shot at the man, barely missing.

Moving on from here, Dexter began involving himself in some absolutely wild schemes. First, it was suggested that nobody in the West Indies had ever heard of a bed warming pan before, and that the market there was wide open. A bed warming pan, as the name implies, is a pan filled with warm embers that got placed under your covers to pre-warm your bed before you slept in it. The West Indies are tropical, and thus the reason bed warming pans weren’t in stock in the West Indies is because nobody needed to warm their beds. However, upon arriving with a literal boatload of useless goods, one of the locals realized that the pans would work perfectly for ladelling molasses. A few weeks Later, Dexter’s boat returned to him totally sold out of bed warming pans. Realizing that the people of the West Indies must be cold, Dexter doubled down and sent a shipment of mittens and warm woolen clothes. This time, Dexter was even more miraculously lucky as his boat arrived just in the nick of time to catch an expedition heading to Siberia that could desperately use a whole shipment of warm clothes. Next, Dexter literally herded cats, rounding up hundreds of strays and shipping them to the Caribbean to act as pest control. Then he told his customers that every Christian family needed a bible, or else they would go to hell. Unsurprisingly, this message came with a boat load of bibles Dexter had bought wholesale for dirt cheap.

From all this business success, Dexter began to see himself as something of a new class of gentry. By 1800 he began going by the title “Lord” Dexter despite the fact that he had no claim to nobility, and was supposedly a fierce American patriot. Perhaps the worst business idea Lord Dexter ever had was shipping coal to Newcastle. Newcastle, for those who don’t know, was a coal mining city, and the last thing they would ever need is coal. Unless, of course, you just so happened to arrive in the middle of a massive miners strike, meaning that the coal starved city would pay a premium for it. And that’s exactly what happened.

So you may be asking yourself right now, was this guy really crazy, or was he actually a supergenius playing three dimensional business chess?

Well, to help answer that question, we should maybe point out that upon learning that English Nobility would write books then freely distribute them to libraries and institutions, Dexter decided to do most of that. He wrote the absolutely unique book, “A Pickle For The Knowing Ones, or Plain Truths in a Homespun Dress,” and began distributing free copies to anyone who happened to pass by. The book is… well it’s something. The entire 44 page work contains almost no punctuation, random capitalization, and spelling so atrocious we’re guessing it was secretly written to get back at a former English teacher of his.

We think that was the end of a sentence, but in this book you just have to kind of guess. In fact, after a review of the first edition of his book criticized the lack of punctuation, Dexter added a final page to the second printing consisting entirely of periods, commas, exclamation points, and question marks, along with the instructions, “fouder mister printer the Nowing ones complane of my book the fust edition had no stops I put in A Nuf here and thay may peper and solt it as they plese.” The book takes some pretty nasty turns, especially when he’s talking about his wife, of whom he says, “pittey me that I have bin in hell 35 years, in this world, with the gost — A woman I married.” Ouch…

Throughout his life, Timothy Dexter surrounded himself with a menagerie of lunatics interspersed with some genuinely incredible people. One uncredited lunatic was John P. a self-proclaimed professor who, despite lacking any scientific education or training, would espouse his supposedly “scientific” knowledge upon anyone who would listen. Another of his troupe was Madame Hooper, a fortune teller who must have had a pretty good track record if she was involved in any of Dexter’s schemes. As you may expect based on his book, his wife was not part of the troupe, and Dexter was known to cavort with many, many, many women.

After living such an unusual life, Lord Dexter found himself curious about what his legacy would be after he was gone. As such, he did what any of us would do in that situation and he faked his own death so he could spy on the funeral. He even had a massive mausoleum built for himself on his property, which was fine for a fake funeral, but was later deemed to be too unsafely built for a mausoleum, and when you think about it how safe does a structure for a dead man need to be?

Perhaps uncharacteristically, he let his family in on the truth, but then demanded they act the part during the funeral. While his kids seemed to do a fine job, his wife Elizabeth apparently wasn’t getting an Oscar for her performance. Lord Dexter somehow got her outside so he could yell at her, ultimately leading to a physical fight so loud it drew a crowd. The crowd, all in attendance of the funeral for the man they currently saw beating his own wife, didn’t know how to react. Lord Dexter decided to act as if nothing had happened, and spent the rest of the funeral acting as if he were hosting a huge party.

Eventually Timothy Dexter kicked the bucket for real, going at the age of 59 on October 26th, 1806. He left much of his money to charity. The statues outside his house, which had cost him thousands sold for only a few dollars each, or were burned after nobody wanted them. His strange house was turned into a Tavern which was eventually destroyed when painters decided to remove old paint using torches.

A Pickle For The Knowing Ones, or Plain Truths In A Homespun Dress

Timothy Dexter, The Ridiculous Millionaire Who Sold Coal To Newcastle