That Time a Canadian City Pretended to be Invaded by Nazis 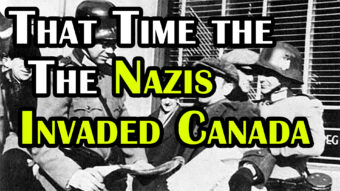 On a cold February morning in 1942, the residents of the Canadian city of Winnipeg, Manitoba awoke to discover that their worst nightmare had come true. It began at 6:30 AM as air raid sirens wailed and streetlights blinked out as a blackout rolled across the city. Aircraft droned overhead and the dull roar of exploding bombs could be heard in all directions. At 7:00 these were joined by the sounds of distant artillery and machine gun fire as frantic radio broadcasts announced that city militias were in full retreat, pulling back to a 3-kilometre perimeter around City Hall. By 9:30 it was all over. The Mayor, Premier, and Lieutenant Governor surrendered and were lead into captivity. Over the radio, Erich von Neurenbeig was announced as the new Gauleiter or regional Governor of the Province.  Troops in coal-scuttle helmets and jackboots marched down Portage Avenue, enemy tanks stood guard at every street corner, and the red, white, and black swastika flag flew over the Legislature and City Hall. Winnipeg was now firmly in the hands of the Nazis.

If you don’t remember ever hearing about Canada being invaded by Nazi Germany, don’t worry: this wasn’t something covered while you were sleeping through history class. The dramatic events of February 19, 1942 were in fact part of an elaborate propaganda exercise meant to shake Manitobans out of their wartime complacency. In the memories of many residents, it would go down in infamy as “If Day.”

1941 had not been a good year for the Allies. In June the Greek island of Crete fell to the Germans, while from April to November General Erwin Rommel’s Afrika Korps besieged the British Eighth Army in the Libyan port town of Tobruk. On June 22, Hitler launched Operation Barbarossa, the invasion of the Soviet Union, while on December 7 Imperial Japan attacked the American fleet at Pearl Harbour and began their sweeping invasion of Southeast Asia and the islands of the Pacific. More than ever the Allied War effort needed the full support of civilians back on the Home Front. In addition to serving in the military or working in factories producing war materiel, one way the average civilian could contribute to the cause was by purchasing War Bonds, essentially a private loan made to the Government backed by the promise of a return on investment after the War. Yet despite the dire situation overseas, many Canadians, knowing they were unlikely to be attacked on their home soil, had become complacent and disconnected from the conflict; consequently the returns of earlier War Bond Drives had been relatively lacklustre. So when the Second National Victory Loan Campaign was announced for Feb 16-March 7, 1942, a small group of citizens in the prairie city of Winnipeg hatched a dramatic plan to remind their fellow countrymen just what they were fighting for – and what the price of defeat might be.

“If Day” was the brainchild of Manitoba Victory Loan Committee members Henry E. Sellers, John Perrin, and George Waight. Waight, an actor, is thought to have first proposed the idea of reenacting a Nazi takeover of the city. Preparations for If Day were extensive and meticulous, involving over 3,500 troops from regular, reservist, and local militia units as well as 40 members of the Young Men’s section of the Board of Trade dressed in Nazi uniforms borrowed from Hollywood. George Waight himself played a Gestapo agent. Special editions of the Winnipeg Tribune newspaper, renamed Das Winnipeger Lügenblatt, were produced with articles in German, and false Reichsmark banknotes and decrees from Gauleiter Neurenbeig were printed for distribution. On the evening of February 18, as a light snow fell gently on the city, the players quietly took up their positions around Winnipeg and waited for the signal to strike.

That signal came early the next morning. At 5:30 AM, a taxi carrying a radio DJ to work was stopped by a  squad of German soldiers. 15 minutes later the radio station was in German hands and propaganda broadcasts began to fill the airwaves. At 6:30, aircraft painted to look like German bombers began to roar overhead while anti-aircraft batteries fired blanks at them, and on frozen rivers throughout the city charges of dynamite and coal dust were set off to simulate exploding bombs. Meanwhile, tanks painted with iron crosses trundled up Portage Avenue to secure major road and rail junctions, while special editions of the Winnipeg Free Press carried breathless headlines like “Bombs Ravage Winnipeg as Airport Fight Rages” “Casualties Are High During Terror Raids.”

Over the next three hours, militia units beat a well-coordinated retreat back to the city centre, until, at 9:30, they finally surrendered. Mayor John Queen, Premier John Bracken, Lieutenant Governor Roland McWilliams and all the city Aldermen were arrested and transported to a makeshift internment camp established at Lower Fort Garry, a historic fur-trading post 30 kilometres north of the city. Then began the reign of terror. In the wake of Erich von Neurenbeig’s appointment as Gauleiter of the province, German troops raided the Great-West-Life Insurance building cafeteria for food, roughed up newspaper vendors, boarded up schools and synagogues, suspended school, and burned books – all old copies already slated for the incinerator, of course – in front of the Carnegie Library. Portage Avenue was renamed Adolf Hitler Strasse and Winnipeg Himmlerstadt, and by evening a printed leaflet was circulated decreeing, among other things:

-No civilians will be permitted on the streets between 9:40 PM and daybreak.

-Every householder must provide billeting for 5 soldiers.

-All organizations of a military, semi-military or fraternal nature are hereby disbanded and banned. Girl Guide, Boy Scout, and similar youth organizations will remain in existence but under direction of the Gauleiter and Storm Troops.

-Each farmer must immediately report all stocks of grain and livestock and no farm produce may be sold except through the office of the Commandant of Supplies in Winnipeg.

-All national emblems excluding the swastika must be immediately destroyed.

-The following offences will result in death without trial

The leaflet concluded with: “No one will act, speak or think contrary to our decrees.”

At 5:30 that afternoon the performance was finally brought to an end when 600 members of the International Ladies Garment Workers Union and Cloak Manufacturers marched down Portage selling Victory Bonds to bystanders. While “If Day” was intended to shock Manitobans out of their complacency, its organizers had wanted to avoid any incidents causing harm. Therefore they took care to widely advertise the event well ahead of time; even the special newspapers distributed during the exercise carried an above-banner disclaimer reading “This Did Not Take Place; But it Could Happen Here.” But inevitably many citizens did not get the memo, adding to the realism of the event. Among these was Alderman Col. Dan McClean, who upon seeing men in Nazi uniforms storming into City Hall fled and hid himself in an empty office.

Despite these minor glitches, the impact of If Day was undeniable, with the Manitoba Victory Loan Committee selling over $3 million dollars in War Bonds on the first day alone. By the time the campaign ended on March 7, 1 in 3 Manitobans had purchased War Bonds and the Province had raised over $65 million dollars, exceeding its quota of $45 million dollars by nearly 45%. It is estimated that by the end of the war, Victory Loan sales had helped to offset nearly 12 of $22 billion in Government wartime expenditures.

But If Day’s significance went far beyond its financial accomplishments. The event, broadcast in newsreels across the country, helped put Winnipeg on the map and inspire other cities to rally even more behind the war effort. The city of Vancouver would even borrow materials from Winnipeg to stage its own version of If Day, and several American cities contacted the organizing committee for advice on staging similar events. And on May 8, 1945, as Canadians across the country celebrated the end of the War in Europe, the citizens of Winnipeg were perhaps more acutely aware than anyone of all they stood to lose had history gone just a little bit differently.

What if Nazis Invaded City? See For Yourself on CTV Special, The Winnipeg Free Press, February 18, 2006, https://www.winnipegfreepress.com/historic/31664224.html