Did Andy Warhol Leave a Dick Pic on the Moon? 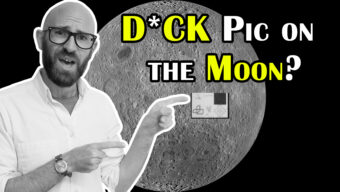 The six Apollo missions that landed on the moon between 1969 and 1972 left an extraordinary amount of equipment behind on the lunar surface. This included Lunar Module descent stages, Lunar Roving Vehicles, ALSEP experiment packages, American flags, and over 800 items jettisoned to save weight – from EVA boots to cameras to waste bags. But among these thousands of items lies a truly unique and unusual object. Hidden in the gold mylar foil wrapping the landing legs of Apollo 12’s Lunar Module Intrepid is a tiny ceramic chip, just 19 x 13mm, bearing six sketches by leading American artists. This is the Moon Museum, the only art gallery on another world.

The idea of sending art into space is almost as old as the space age itself. On September 13, 1959, the Soviet Luna 2 probe impacted the lunar surface, becoming the first manmade object to reach another celestial body. Aboard the spacecraft were two metal spheres divided into pentagonal pennants stamped with the Soviet crest and the year of launch. An explosive charge in each sphere was designed to detonate just before impact, scattering the pennants across the lunar surface, but as Luna 2 impacted the lunar surface at 3.3km/s, it is likely that they were vaporized. 10 years later, during the historic Apollo 11 mission, Neil Armstrong and Buzz Aldrin left behind a gold olive branch as a symbol of peace as well as a stainless-steel plaque fixed to one of the Lunar Module legs, bearing the image of the earth’s two hemispheres and the signatures of the crew and then-President Richard Nixon. But all these pieces were officially sanctioned by their respective governments; the Moon Museum was a far more…shall we say, independent project.

The Moon Museum was the brainchild of American artist Forrest Myers, best-known for his monumental sculptures such as The Wall in SoHo, New York. In early 1969 Myers put out a call to his fellow artists for submissions to his space art gallery, of whom five eventually responded. Myers himself drew the intersecting figure on the lower left of the museum, which he titled “Interconnection”. Robert Rauschenberg drew a single minimalist line, David Novros a black square with white lines, Claes Oldenburg an interpretation of Mickey Mouse, John Chamberlain another geometric grid pattern, and Andy Warhol…a penis. Despite the rather obvious nature of his contribution, the Bad Boy of the art world nonetheless maintained that it was actually just his initials in the shape of a rocket ship. Sure it is, Andy…

All six sketches were miniaturized and printed on a ceramic wafer using integrated circuit technology by technician Fred Waldhauer at Bell Laboratories. In total 20 wafers were made, one destined for the moon and the rest for the artists and others who contributed to the project.

At first Myers tried to contact NASA and obtain official approval for the project, but the Agency dithered on the proposal, giving Myers the runaround for months. Unable to get a straight answer, Myers finally decided to take matters into his own hands. Fred Waldhauer, who had printed the wafers, contacted a technician he knew at Grumman Aircraft, who were assembling the Lunar Module for the upcoming Apollo 12 Mission. The technician agreed to smuggle the Moon Museum onto the LM and send a telegram to Meyers confirming it was aboard. Smuggling items onto Lunar Modules was a common practice among the Grumman staff, with technicians often slipping family photos or small messages into the layers of Mylar insulation covering the descent stage. Yet despite this ubiquity it was still strictly against regulations, and the few who were caught were summarily fired.

On November 12, 1969, Myers received a telegram reading YOUR ON A.O.K. ALL SYSTEMS GO and signed JOHN F. Two days later, the crew of Apollo 12 blasted off from Cape Canaveral, touching down on the moon on November 19. On November 22, when Apollo 12 was on its way back to earth, an article in the New York Times revealed the Moon Museum’s existence to the public for the first time, though in the accompanying photo Warhol’s sketch is hidden by conveniently-placed thumb.

Yet despite the telegram it is unknown whether the Moon Museum actually made it to the moon, and to this day the identity of “John F”, the Grumman technician who allegedly smuggled it aboard Intrepid, remains a mystery. No technicians with that name worked at Grumman at the time, though it is believed the name was a pseudonym and a reference to President John F. Kennedy, who launched the Apollo Program.

Whether or not the Moon Museum currently sits on the Lunar surface, it would not be the last work of art to make the journey. On August 1st, 1971, Apollo 15 Commander David Scott placed a small 3.5 inch aluminium sculpture called Fallen Astronaut on the lunar surface. Created by Dutch sculptor Paul van Hoeydonck, the sculpture was accompanied by a plaque bearing the names of 14 astronauts and cosmonauts who had died in the line of duty.

But depending on one’s definition of art, there is another candidate for inclusion in the list of works on the moon, this one also left behind by the crew of Apollo 12. To help them make efficient use of their limited EVA time, astronauts Pete Conrad and Alan Bean had detailed mission checklists strapped to their wrists. These lists, around 30 pages long, were prepared by backup crew members David Scott and James Irwin, who managed to sneak in some extra reading material. When Al Bean flipped to page nine of his checklist, he was presented with the unexpected sight of Cynthia Myers, Playboy’s Miss December 1969. She was joined by Miss January Leslie Bianchini, as well as Miss September Angela Dorian and Miss October Reagan Wilson on Conrad’s checklist. They remain on the lunar surface to this day, the first – and thus far only – Playmates to reach the moon.

While dick pics, fallen astronauts, and Playboy Playmates might seem hard to beat, these are only a few of the stranger objects that have made their way to the moon. Apollo 11 Lunar Module Pilot Buzz Aldrin took with him a miniature chalice, wafer, and bottle of sacramental wine which he used to take holy communion shortly after landing on the moon on July 20, 1969. Following the ritual, Aldrin read aloud from John 15:5: “I am the vine. You are the branches. Whoever remains in me and I in him, will bear much fruit; for you can do nothing without me.” Aldrin had intended to broadcast the reading live to the world, but due to the controversy over the crew of Apollo 8 reading aloud from the book of Genesis the year before, he decided to keep his ceremony a secret.

Alan Shepard, Commander of Apollo 14, took along some decidedly less holy objects: two golf balls and a 6-iron head, which he affixed to the end of a lunar soil collection tool to create a makeshift golf club. On February 5, 1971, swinging one-handed due to the bulk of his spacesuit, Shepard became the first – and thus far only – person to play golf on the moon, famously quipping that in the reduced lunar gravity his balls flew for “miles and miles.” Joining in the fun, Lunar Module Pilot Edgar Mitchell threw a tool handle like a javelin, thus inaugurating the first “lunar olympics.”

While Shepard and Mitchell’s antics were received with good humour, the crew of the next mission would not be so lucky. Prior to their mission, Apollo 15 crew members David Scott, Alfred Worden, and James Irwin struck a deal with German stamp dealer Hermann Sieger to carry 400 postal covers – commemorative envelopes – to the moon and back. In return, each astronaut would receive $7000. The covers were postmarked with the July 26, 1971 launch date, spent four days on the moon, then were postmarked again when the crew returned to earth on August 7. 100 were sent to Sieger, with the rest being divided among the astronauts to do with as they pleased. But when NASA found out about the arrangement, they were furious. As a public agency, they couldn’t be seen letting astronauts profit personally off missions funded with taxpayer dollars. So, amid widespread media scrutiny, Scott, Worden, and Irwin were pulled from flight crew rotation and called before a closed session of the Senate Committee on Aerospace and Space Sciences. Though by then they had already returned their $7000 fee to Sieger, they were nonetheless reprimanded by NASA over the affair. As this reprimand made it unlikely they would ever be selected for spaceflight again, all three astronauts retired from NASA soon after. None ever flew in space again.

But perhaps the objects with the longest legacy were carried into space by Apollo 14 Command Module Pilot Stuart Roosa: 500 tree seeds. The seeds, consisting of 100 each from the Redwood, Sycamore, Douglas Fir, Sweetgum, and Loblolly Pine, were carried at the behest of Edward Cliff, then Chief of the Forest Service, and orbited the moon between February 4 and 7, 1971. Following the return of Apollo 14 to earth, the seeds were germinated by the Forest Service and given away to various state forestry departments and foreign governments, with many being planted in 1976 to celebrate the United States’ bicentennial. Today, around 80 of the so-called “Moon Trees” are still alive and well across the country.