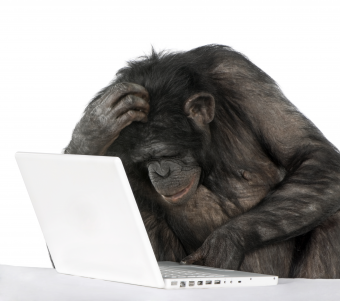 The idea that given enough time, even completely random activity could produce something complex goes back at least a couple thousand years, though not without its detractors even then. For example, Cicero states in his De Natura Deorum (On the Nature of the Gods) in 45 BC:

Is it possible for any man to behold these things, and yet imagine that certain solid and individual bodies move by their natural force and gravitation, and that a world so beautiful adorned was made by their fortuitous concourse? He who believes this may as well believe that if a great quantity of the one-and-twenty letters, composed either of gold or any other matter, were thrown upon the ground, they would fall into such order as legibly to form the Annals of Ennius. I doubt whether fortune could make a single verse of them. How therefore can these people assert that the world was made by the fortuitous concourse of atoms… if a concourse of atoms can make a world, why not a porch, a temple, a house, a city, which are works of less labour and difficulty?

Fast-forwarding to more modern times, it’s not actually clear who made the monkeys on typewriters producing Shakespeare version of the idea. You’ll almost universally see the original quote attributed to Thomas Henry Huxley (1825-1895)- a 19th century biologist and comparative anatomist, who was also known as “Darwin’s bulldog” owing to his pugnacious defense of evolutionary theory.

In fact, gearing up for it, a day before Darwin published On the Origin of Species, Huxley wrote to him on November 23, 1859, “I finished your book yesterday… I am ready to go to the stake, if requisite, in support… And as to the curs which will bark and yelp, you must recollect that some of your friends… are endowed with an amount of combativeness which… may stand you in good stead. I am sharpening up my claws and beak in readiness.”

As for the monkey/typing defense, on June 30, 1860, Huxley and Anglican Bishop, Samuel Wilberforce, held a debate, or at least that’s what popular history remembers. In fact, it was more accurate that the two were part of an open discussion at Oxford after the presentation of a paper, with the discussion featuring several prominent scientists putting forth their thoughts.

The topic of the hour was Darwin’s relatively newly minted theories and contrary to what is often said today, it would appear Bishop Wilberforce’s arguments trended more towards scientific merit, rather than religiously themed on the whole. This is unsurprising given that it wouldn’t be until much later that the whole “creation vs. evolution” battle whipped up, with most Christian theologians the world over at the time seeing no real contradiction here as the Bible is not specific on HOW God created things exactly, merely on order of major events. The only small contention from a Christian perspective in the early going was simply on the time scale needed.

In any event, at some point during the discussion, Wilberforce allegedly put forth the classic argument that “a watch implies the existence of a watchmaker”- in other words such a complex system couldn’t have come about by chance. Huxley allegedly countered by stating something to the effect of:

Six eternal . . . apes typing on six eternal typewriters with unlimited amounts of paper and ink could, given enough time, produce a Psalm, a Shakespearean sonnet, or even a whole book, purely by chance . . .by random striking of the keys.

So did Huxley actually say this?

You see, it turns out while this is perhaps one of the most famous scientific debates in the last couple centuries, at the time, nobody bothered to well document what exactly was said. It was just a relatively friendly public scientific discussion; not exactly front page news, and nobody was sitting there scribbling down what was said. Further, most of the supposed quotes we know from it come from recollections of people a couple decades after the event, or snippets of recollections from contemporary letters.

On the former point, we’ll leave you to decide if you can remember in any real detail or accuracy- or indeed remember anything at all- about a lengthy conversation you had weeks ago, let alone after two or three decades have gone by.

As for the so-called Huxley vs. Wilberforce debate, it’s also noteworthy that the supposed quotes from the event are heavily biased via largely collected a couple decades later from the pro-Darwin side. Contrary to popular perception based on those accounts, the scant contemporary accounts of the event seem to lean more towards the discussion being quite genial, rather than heated, with several of the speakers explicitly walking away thinking they came out on top in the discussion. For example, Huxley would later state, he was “the most popular man in Oxford for a full four & twenty hours afterwards.” Wilberforce, on the other hand, state, ” I… had quite a long fight with Huxley. I think I thoroughly beat him.” Joseph Hooker, one of the other scientists involved in the discussion, also stated, “I have been congratulated and thanked by the blackest coats and whitest stocks in Oxford.”

On the note of Hooker, who was also a close friend of Darwin’s, he wrote to Darwin shortly thereafter with a rather lackluster view of Huxley’s performance, stating,

Sam Oxon got up and spouted for half an hour with inimitable spirit… Huxley answered admirably… but… he did not allude to Sam’s weak points nor put the matter in a form or way that carried the audience.

As for other witness accounts directly after, they are a mixed bag about who put forth the best arguments, if anyone.

Whatever the case, after the fact, apparently all the key protagonists, rather than upset, reportedly “all went cheerfully off to dinner together afterwards.”

Going back to the infinite monkey quote supposedly said by Huxley, beyond the fact that no contemporary account of the event mentions him saying such a thing, perhaps the most damning evidence against it is that the first commercially successful typewriter wouldn’t make its debut until over a decade after this debate, and variations of such a device coming before were few and far between, and not really something known about by anyone but their inventors and associates.

So who actually first put forth this modern version of a rather old notion? The first known instance seems to come from French Scientist Émile Borel’s 1913 paper La mécanique statique et l’irréversibilité where he states:

Let us imagine that a million monkeys have been trained to strike at random on the keys of a typewriter and that, under the supervision of illiterate foremen, these typing monkeys work hard ten hours a day with a million typewriters at various types. The illiterate foremen would collect the blackened sheets and link them in volumes. And after a year, these volumes would be found to contain the exact copy of books of all kinds and all languages kept in the richest libraries in the world. Such is the probability that there will occur for a very short instant, in a space of some extent, a notable deviation from what statistical mechanics considers as the most probable phenomenon….

The same sentiment was repeated by several other academics in the following decades before ultimately being attribute to Huxley starting in the 1930 work The Mysterious Universe by James Jeans, though not explicitly giving Huxley’s full name in this mention- simply stating that someone named “Huxley” said it.

Regardless of who first put monkeys and typewriters together, the idea has captured the imaginations of many. And in recent times, a few brave researchers have attempted to test the hypothesis and see if they could get monkeys to produce Shakespearean works.

For instance, in 2003, lecturers and students with the University of Plymouth’s Institute of Digital Arts and Technology (i-DAT) finagled a £2,000 (roughly $3,665 today) grant from the school’s Arts Council to place a single computer and keyboard in the Sulawesi crested macaques enclosure at the Paignton Zoo.

After a month of monkeying around with the computer, Gum, Heather, Mistletoe, Elmo, Holly and Rowan (the macaques) had produced five pages of nonsense text, but otherwise seemed to limit their screen time to urinating and/or defecating on the computer until such time as it stopped working. According to i-DAT’s director, the project was successful though since, being live-streamed on the internet, it “provided very stimulating and fascinating viewing.”

Moving on from there to the digital space, a program simulating such a random monkey, this time who could not poop and pee on the computer, was successfully able to create the first 19 letters of The Two Gentlemen of Verona, “VALENTINE. Cease to…” It only took 42,162,500,000 billion billion monkey-years for the virtual monkey to do it.

Another attempt was made beginning on August 21, 2011. These virtual “monkeys” were actually millions of instances of a computer program running on Amazon’s SC2 cloud, with the program set up to spew out random sequences of nine characters. After only one month, they had (sort of) produced A Lover’s Complaint and were just shy of completing the entirety of Shakespeare’s other works.

There was a catch, however. Once a “monkey” spewed out a nine-letter sequence that appeared in one of the works, that sequence was considered complete. According to mathematics professor, Dr Ian Steward, this was the only practical way to do the experiment since, “to type up the complete works in the correct order without mistakes would take much longer than the age of the universe.”

And this makes sense when you consider the odds of producing just one of Shakespeare’s works by randomly pecking away at a keyboard. For example, the folks at The Mary Sue ran the numbers for monkeys typing Hamlet with the following parameters: Formatting and capitalization were disregarded, but otherwise a “character-for-character match” to the version they had (which had 169,541 characters) was required. They also limited the keys on the monkey’s typewriters to only those 36 found in the play, and (theoretically) gave these special typewriters to 100 monkeys. In this case, the odds of the monkeys simply typing the word “Hamlet” worked out to be 1 in 21,767,823, and to type the entire play, the odds would be 1 in 36 169541 , or, as their Google calculator aptly termed it- infinity.

Of course, whether an infinite random monkey using a typewriter could ever produce Hamlet is a poor argument against or in support of evolution, as it fails to address the fact that there is no external pressure to produce such a work, and thus the typing remains completely random throughout all time, rather than slowly evolving towards the end work via external pressure or reward. Sort of a survival of the fittest, where survival depends on the monkey’s ability to produce sequences from the play- perhaps starting with a single character, then small sequences leading eventually to a single word that appears in the play, and so on until millions of monkey years later the monkeys are effective copyists for Hamlet.

Whatever the case, in the end, I think we can all agree Artificial Intelligence Computer Scientist Dr. Robert Wilensky’s said it best in a 1996 meeting at the University of California, Berkley, “We’ve all heard that a million monkeys banging on a million typewriters will eventually reproduce the entire works of Shakespeare. Now, thanks to the Internet, we know this is not true.”