December 13, 2018 Karl Smallwood
Dan P asks: Did mobsters ever really use cement galoshes on the feet of people they sent to sleep with the fishes like in the movies? 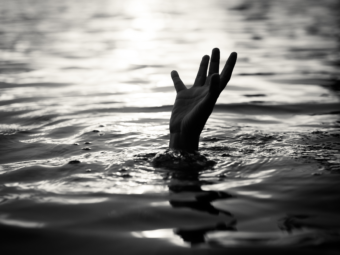 If there’s one thing everyone knows about the mob it’s that they had an astonishing number of ways to off the various wiseguys, shysters and snitches who got in the way of their business. The most famous of these methods is arguably to send them to sleep with the fishes wearing concrete shoes.  But has any mobster ever been known to actually do this?

Before we get into that, we would just like to briefly point out that “cement shoes” is sometimes used interchangeably with “concrete shoes” when discussing this particular facet of mafia murder. However, “cement shoes” is a misnomer since cement is an ingredient in concrete- the binder that holds everything together. Concrete, on the other hand, is a mixture of materials like sand, gravel, and small rocks combined with any type of cement and water.

Now with that bit of pedantry off our chest, let’s get into it.

To begin with, it’s important to explicitly note the logistics of killing a person in this way. The general method of making “concrete shoes” is to simply place the feet of a person you wish to make “disappear” into a bucket filled with wet concrete and wait many hours for it to set enough to throw the person in the water without their feet coming out of the concrete… For the mobster in a hurry, a quick setting concrete is obviously preferred, though this still takes its sweet time to dry sufficiently depending on exact variety. This is all something more than a little problematic for the proper secure setting of the concrete around the feet.

However, once the concrete hardens sufficiently, assuming it’s remained secure on their feet and their squirming hasn’t given them literal wiggle room, the person wearing the “shoes” will be thrown into a nearby body of water, the idea being that the weight of the concrete will prevent the body from ever rising to the surface.

To doubly make sure of this, in some stories the unfortunate victim is placed inside of a much larger container like a barrel, which is similarly filled with concrete. In these cases, the term concrete overcoat is often used.

As frightening as this all sounds, as you might have guessed from that description, particularly given the latter’s incredible weight and that there are much less elaborate and time consuming ways to kill someone just as effectively, there has never been a known case of someone actually being killed in this way.

That said, if we detach ourselves from the connection to the mafia- and just look at murders in general- there has been one known case of someone being made to wear concrete shoes and then tossed in the water, just this wasn’t how we was killed either. Further, there are numerous instances of others having been found tied to heavy objects, like concrete blocks, and then tossed into the sea.

In these instances, again, the people are universally thought to have been killed before this was done. For example, two men known to be killed and later disposed of in this manner include a hitman called Ernest Rupolo who was found with concrete blocks tied to his ankles in Jamaica Bay in 1964 and a racketeer called Johnnie Goodman, the body of whom was dragged from a river in 1941 wrapped in a heavy canvas sheet and weighed down with a massive block of concrete.

When talking literal concrete shoes, you certainly could wait around and let concrete dry, then laboriously transport a struggling and noise making already heavy adult person now made much heavier to a dock somewhere and pitch them into the water. But the logistics of it seemingly make it something nobody ever really did. Rather, the nefarious of the world tended to go with the easier route of just killing them, then quickly transporting them to the water and tying the heavy object on at the last minute before plopping them in the drink.

That said, this isn’t foolproof. For example- the aforementioned case of the one and only definitively known instance of someone made to sleep with the fishes wearing concrete shoes- one Peter Martinez. Peter was a gang member whose body washed ashore in 2016. As one Detective Robert Boyce noted, “This individual was wrapped in plastic bags and his arms were tied behind him and his feet were submerged in concrete.” At some point he was then tossed into the water.

It should be noted though that it wasn’t drowning that killed him according to one of the medical examiners in the case, Dr. Barbara Sampson, who noted, he died of “asphyxia caused by the covering of the mouth and nose by duct tape”.

While this doesn’t preclude this having been done to him immediately before being tossed into the water, it’s more likely he was killed in this way many hours before the actual dumping of the body. This hypothesis is supported by the fact Martinez seemingly didn’t struggle when the concrete was poured around his feet and left to harden, at least, based on the way it set.

As mentioned, it is known that people, including mobsters, occasionally do chuck bodies into the sea as a means of disposal. But as for the more elaborate literal “concrete shoes” thing, one of the first known instances of this being reported comes from a June 3, 1935 news article published by the Associated Press discussing the disappearance of a bootlegger called Danny Walsh.

According to the report, after disappearing under somewhat mysterious circumstances in 1933, a rumor had circulated in the criminal underworld that, to quote the news report, “[he] was stood in a tub of cement until it hardened about his feet, and then thrown alive into the sea…”

However, after extensive investigation neither the police, nor any of their many informants, could ever confirm the veracity of the tale, nor ever locate Mr. Walsh’s body. It was after this widely reported rumor about Walsh that the idea of mobsters giving people the cement shoe treatment became relatively common when discussing potential mob hits.

But in the end, despite this being a common trope for almost a century now, even something mobsters have threatened from time to time, there’s never been any known case of someone being killed in this way.  On top of this, there has never been a case of any police informant ever reporting such had definitively happened. Just as importantly, there is the impracticality of it, and the fact that even with weighing down a body significantly, they still sometimes wash up on shore. We see this, among other instances with bodies weighed down by concrete blocks and in the one known case of someone actually tossed in the water wearing two five gallon buckets filled with concrete.  All this combined has most authorities firmly putting the idea that mobsters used to give people the concrete shoe treatment as a myth, even if it is still possible there was an exception or two at some point that was never discovered.

Thus, while it is true that mobsters were occasionally known to send people to “sleep with the fishes”, seemingly for practicality’s sake they don’t seem to have ever actually bothered to kill people using the concrete shoe or overcoat method and then tossing them screaming into the water.