What Ever Happened to Miss Cleo the TV Psychic? 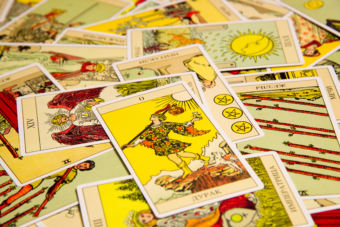 For those unfamiliar, around the turn of the century no psychic was more famous than the purportedly Jamaican-born Miss Cleo (née Youree Dell Harris) representing the Psychic Readers Network (PRN). Appearing on late-night infomercials, Miss Cleo hooked her audience with a combination of charisma, Tarot card readings, concerned looks, and imperatives like “Call me now!” uttered in a comically bad impression of a Jamaican accent. (You can see a snippet of one of her infomercials here, complete with temporarily losing her accent at one point.)

Harris had originally come up with the Jamaican character of Cleo in a play she wrote called “For Women Only” in 1996. Around 1997, she was also involved in two other productions, “Summer Rhapsody” and “Supper Club Cafe”, in Seattle. At this time, she was going under the name Ree Perris and also claimed she had attended the University of Southern California as a theater arts major, though the school has no record of anyone with any of her many aliases attending.

Ultimately she was given a grant by the Langston Center to produce a play, but then skipped town with the money, apparently without paying the cast, telling them, according to one of the actors, that she had bone cancer and so wasn’t sure when she’d have the money to pay them.  According to the Langston Center, no effort was made to recover the money as the legal fees would have surpassed the amount given to her.

How Harris became involved with the Psychic Readers Network (PRN) and ultimately the face of it for a time using her character of “Miss Cleo” isn’t clear.  Presumably given her acting background, one would think there was probably a job listing somewhere that she applied for and figured her Jamaican Cleo character would work for what they were looking for. However it happened, she was a hit.

Although her persona was obviously a bit of a sham, at the time, Miss Cleo and PRN were obscenely successful at getting people to call their 900 number- and keeping them on the line. In fact, thanks to a rather public court battle shedding some light on things, it would appear PRN raked in around a cool billion dollars (yes, billion) during the brief run with Miss Cleo as the face of the company.

Why the court battle? Among other things, while the advertisements and infomercials would claim they offered a free reading, this was really just 5 minutes free- reportedly a time period when callers simply gave personal information or were put on hold while they awaited being connected with Miss Cleo. In the end, according to the Federal Trade Commission (FTC), the average caller would pay about $60 per call at $4.99 per minute.

Beyond all this, the FTC noted that once you called in, you could expect to get many automated calls back with messages stating things like, “Miss Cleo had a dream about [you] and [you] should call back” or spam emails (whether you’d ever called or not) saying things like Miss Cleo has “been authorized to issue you a Special Tarot Reading!… it is vital that you call immediately!”

Of course, Miss Cleo wasn’t likely even the person you’d get to talk to if you called, with most calls fielded by other people. According to one former employee, Rebecca Barthel (who briefly took a job as a psychic while in college to avoid having to work retail), she was instructed to tell people who called that Miss Cleo was on vacation. And of these employees, again according to Barthel, becoming one of the Psychic Readers Network’s psychics at this time was quite easy. She did it simply by answering and ad looking for people wanting to make “$12 an hour”. With no real screening whatsoever, she was set up so her phone would receive calls from people wanting to talk to a psychic.

Barthel states that the longer one was able to keep people on the line (remember, they charged $4.99 per minute), the more calls they’d send your way and, thus, the more money you’d make. (The “psychics” were paid by the minute at around 12-24 cents per minute.) If average call time was short, your phone would ring less and less, with more calls given to other “psychics” who were better at keeping people talking.

Employees were also given scripts to read, structured to drag out the conversation and leave people feeling good about the call. As Barthel stated, it was basically “telling people what they wanted to hear, even if we had to make it up.”

For instance, if the person just wanted a quick answer to a question, “we were supposed to tell them we needed to feel their vibe to get their energy before we could answer any questions… The scripts were very general. You will come across money, love is in the future, someone at work is jealous of you, someone at work likes you — yaddayaddayadda. We also had the tarot script, which was the same bunch of general information.”

Not surprisingly, beginning in 2001, lawsuits sprung up in states across the country, and in 2002, the Federal Trade Commission (FTC) stepped in and charged PRN and its sister company, Access Resource Services, Inc. (ARS) with deceptive advertising, billing and collection practices. The parties settled, with PRN and ARS agreeing to cancel $500 million in currently outstanding bills, return all un-cashed checks and pay a $5 million fine. And although it wasn’t included in the fraud charges, as a result of the FTC complaint, it was revealed that Miss Cleo was actually born in Los Angeles, California.

As for Miss Cleo, while many among the public thought she was behind the whole thing, she was actually just an employee of the company and, if she’s to be believed, not even a particularly well paid one relative to the money she was making her employer. She claims she earned only about 24 cents per minute on phone calls plus some extra fees for the infomercials and the like, which is where she made her real money. She stated, “I probably made a little less than $450,000 for the two-year run of the thing. I got $1,500 for the first show and was making more by the time I was finishing with them.”

While a large sum for two years of work, considering the billion dollars or so the company reportedly made (before having to cancel $500 million of bills) largely on the strength of the character she came up with and her charisma, not to mention the massive amount of merchandise bearing her likeness and catch phrases, one might have expected she’d have gotten more. But, as she stated, “I got into some bad contracts, and it spiraled.”

In any event, after the FTC crashed PRN’s party, as Harris was just an employee and had no part in the various deceptive practices performed by the company, the only consequence to “Miss Cleo” herself from the court battle was simply the side effect of losing her job, with charges against her dismissed.

Not done with the character, however, she later moved on to doing more or less the same thing, but face to face for $75 to $250 an hour and switching from calling herself a psychic to calling herself a”vodoo priestess,” bizarrely still keeping up the fake Jamaican persona despite, at least as far as any record we could find indicates, never actually having been to Jamaica.

She went on about her post-PRN days,

I’m more a shaman, an elder in a community who has visions and gives direction to people in their village. My clients and my students are my village. I take care of this community. If you sit down at my table, you have to take away a lesson and not just learn what is going to happen tomorrow. I also perform weddings — both gay and straight marriages — and house cleansings and blessings.

In other subsequent work, she also voiced Auntie Poulet in the video game, Grand Theft Auto: Vice City (2002) (for which PRN in 2017 bizarrely sued Rockstar, the game maker, for)  and published the book Keepin’ It Real: A Practical Guide for Spiritual Living.

In 2003, she joined other infamous 1990s celebrities, Tammy Faye Bakker (of The PTL Club fame) and a cable pornography star, Robin Byrd, to become a spokesperson for a new music network, Fuse, among other promotional work.

In 2014, appearing as Cleomili Harris, Miss Cleo appeared in a documentary about telephone relationships, Hotline. The next year, she reprised her Miss Cleo role for a number of advertisements for a General Mills cereal, although shortly after, the ads were pulled when PRN challenged that it owned the rights to the character.

She even for a time hosted a podcast, which is still up even today, despite her death.