Stabbing Bed Bugs, Lloyd Christmas, Cliff from CliffsNotes and More in Yet Another 10 Quick Facts 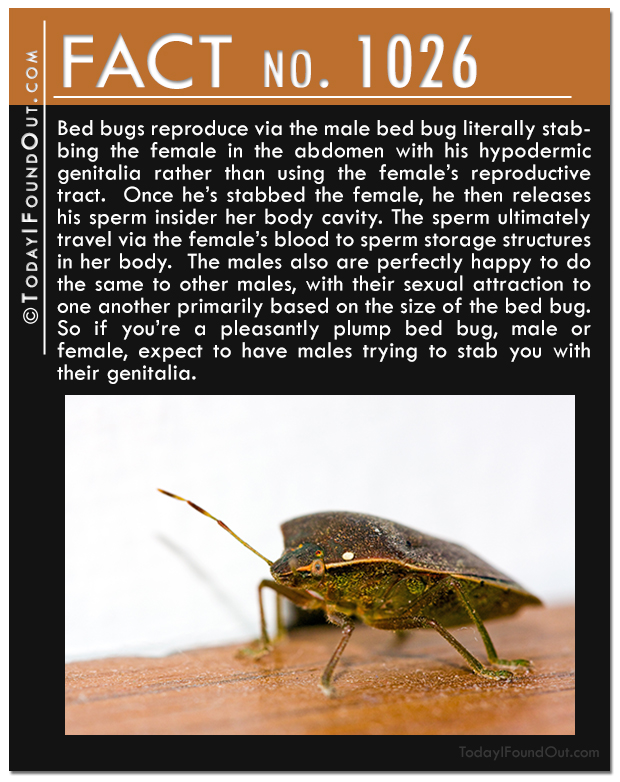 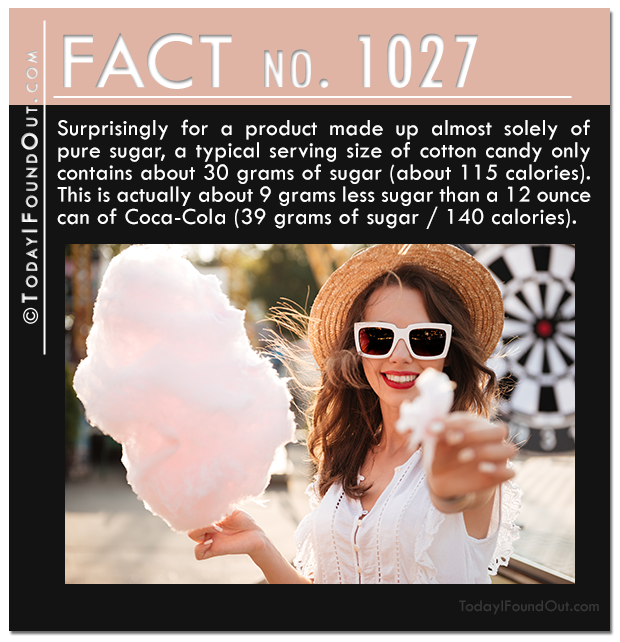 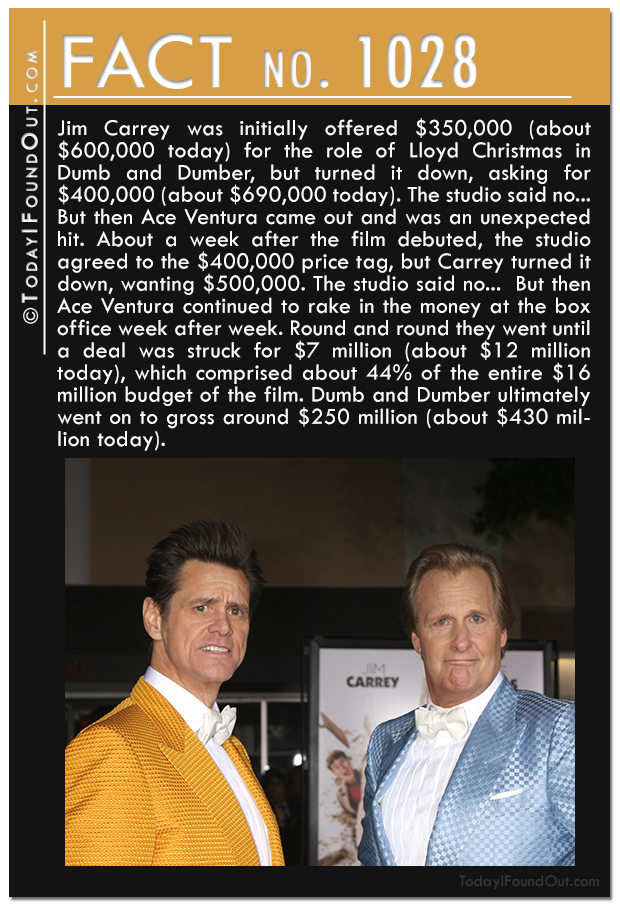 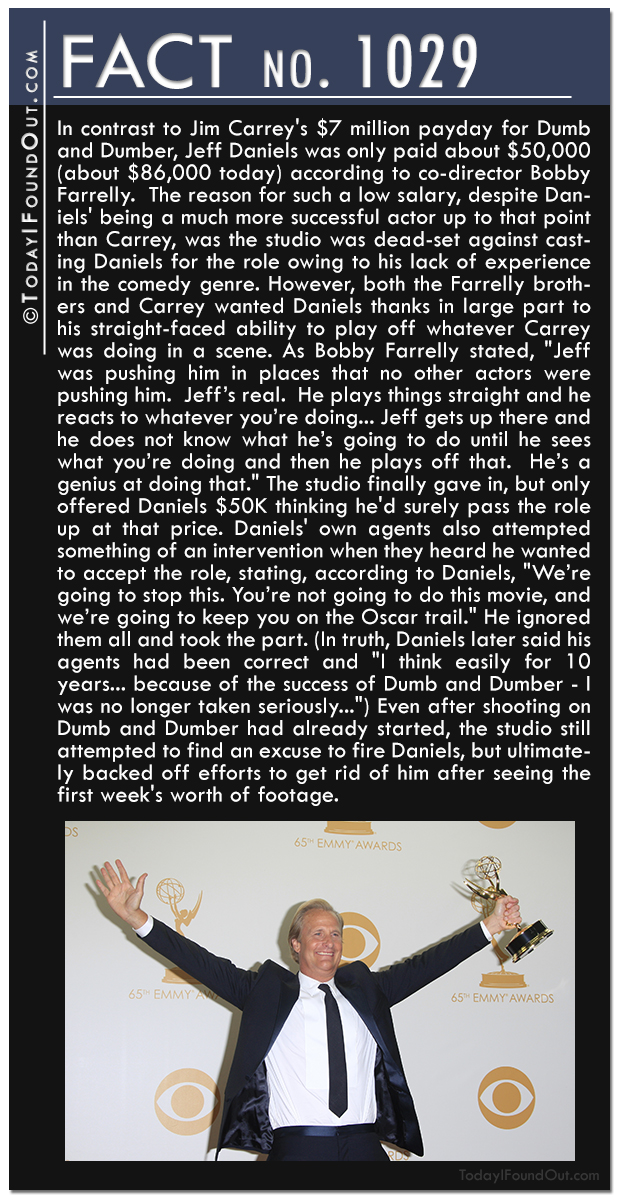 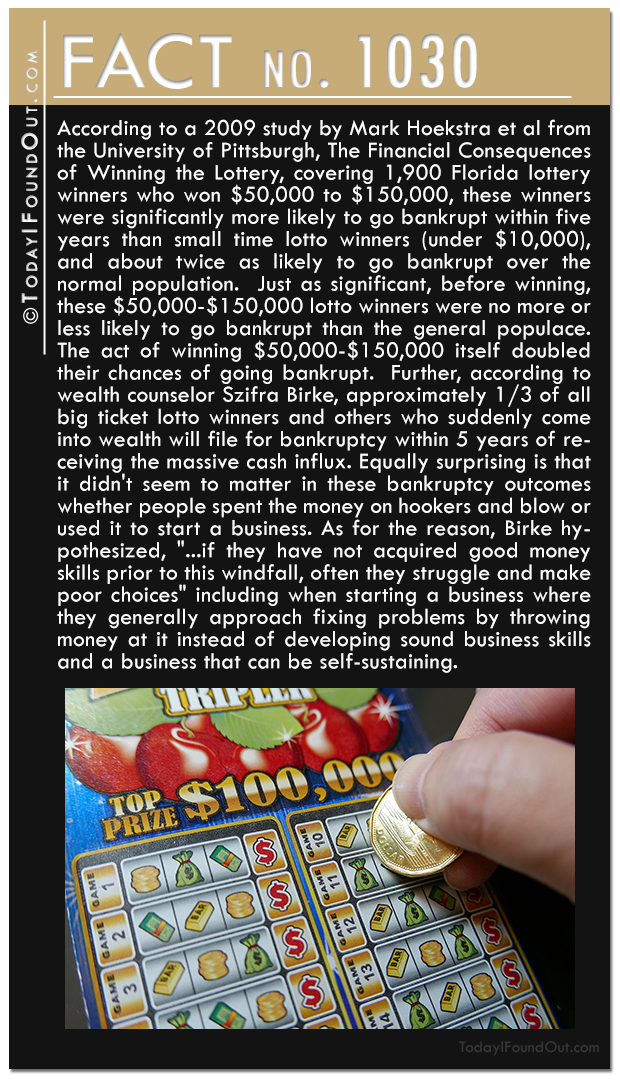 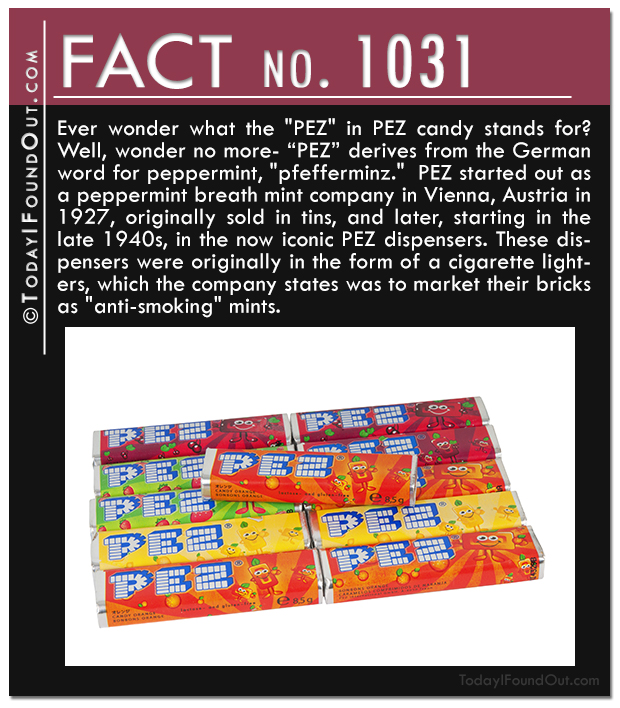 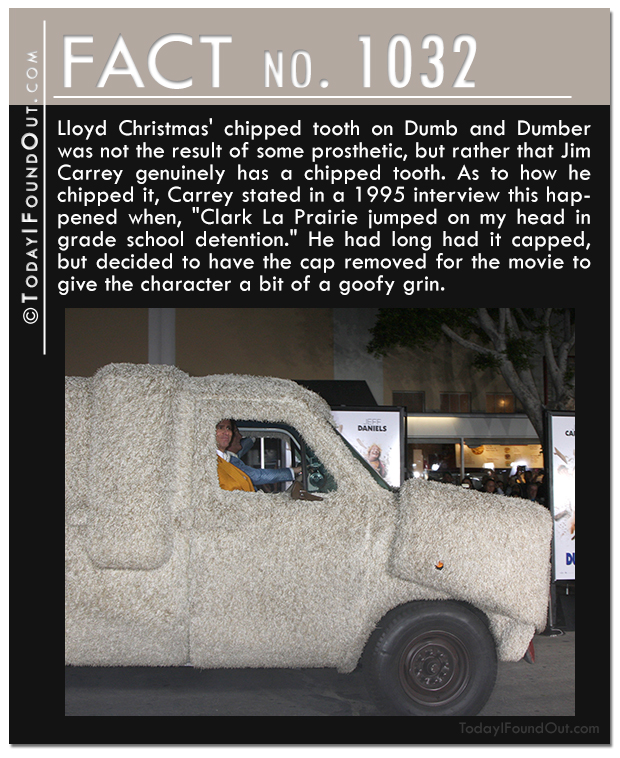 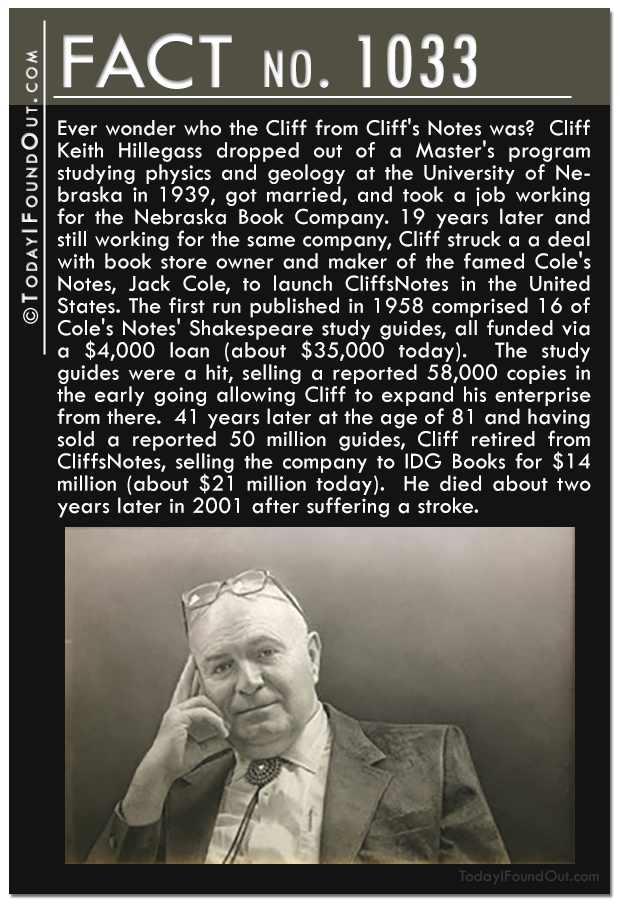 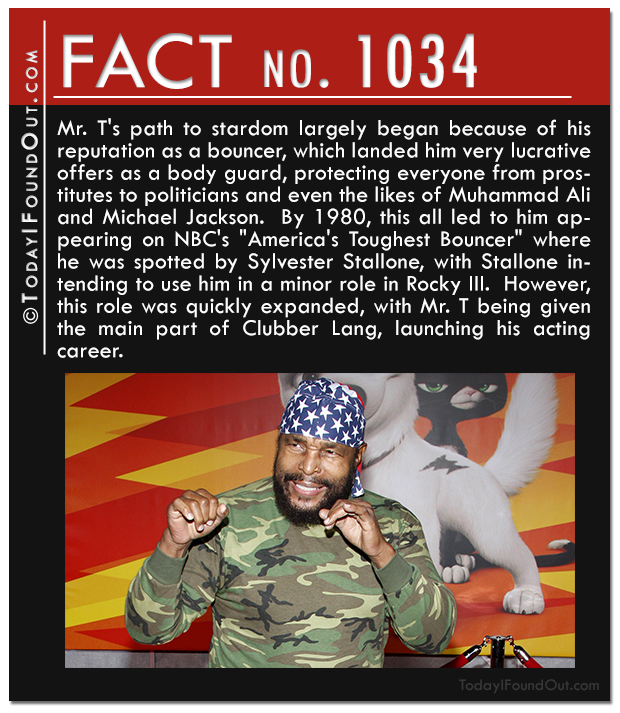 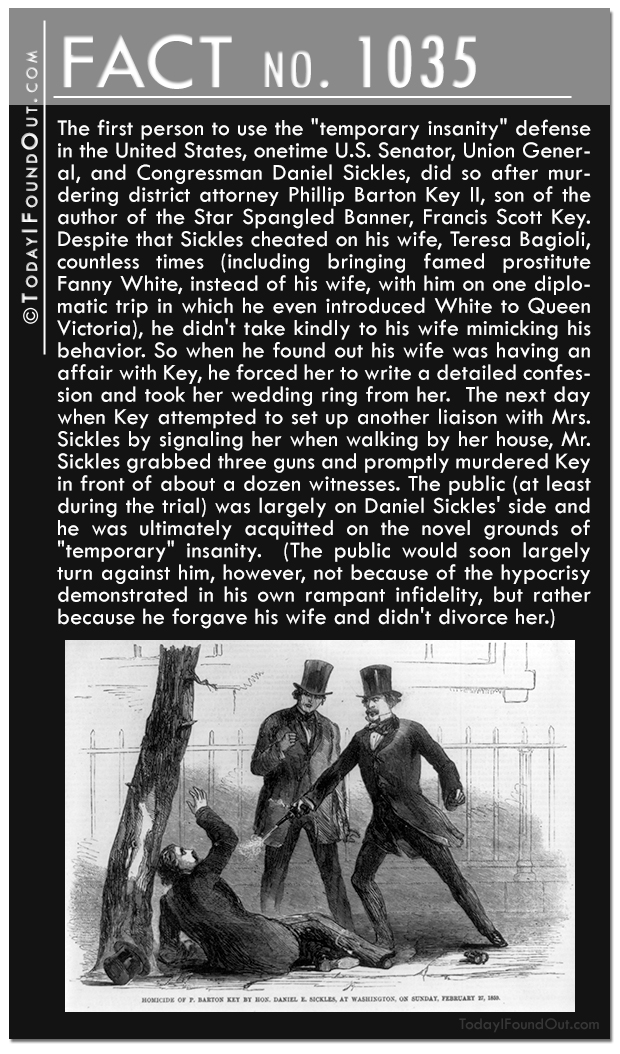 1026:  Bed bugs reproduce via the male bed bug literally stabbing the female in the abdomen with his hypodermic genitalia rather than using the female’s reproductive tract.  Once he’s stabbed the female, he then releases his sperm insider her body cavity. The sperm ultimately travel via the female’s blood to sperm storage structures in her body.  The males also are perfectly happy to do the same to other males, with their sexual attraction to one another primarily based on the size of the bed bug.  So if you’re a pleasantly plump bed bug, male or female, expect to have males trying to stab you with their genitalia.

1027: Surprisingly for a product made up almost solely of pure sugar, a typical serving size of cotton candy only contains about 30 grams of sugar (about 115 calories). This is actually about 9 grams less sugar than a 12 ounce can of Coca-Cola (39 grams of sugar / 140 calories).

1029: In contrast to Jim Carrey’s $7 million payday for Dumb and Dumber, Jeff Daniels was only paid about $50,000 (about $86,000 today) according to co-director Bobby Farrelly.  The reason for such a low salary, despite Daniels’ being a much more successful actor up to that point than Carrey, was the studio was dead-set against casting Daniels for the role owing to his lack of experience in the comedy genre. However, both the Farrelly brothers and Carrey wanted Daniels thanks in large part to his straight-faced ability to play off whatever Carrey was doing in a scene. As Bobby Farrelly stated, “Jeff was pushing him in places that no other actors were pushing him.  Jeff’s real.  He plays things straight and he reacts to whatever you’re doing… Jeff gets up there and he does not know what he’s going to do until he sees what you’re doing and then he plays off that.  He’s a genius at doing that.” The studio finally gave in, but only offered Daniels $50K thinking he’d surely pass the role up at that price. Daniels’ own agents also attempted something of an intervention when they heard he wanted to accept the role, stating, according to Daniels, “We’re going to stop this. You’re not going to do this movie, and we’re going to keep you on the Oscar trail.” He ignored them all and took the part. (In truth, Daniels later said his agents had been correct and “I think easily for 10 years… because of the success of Dumb and Dumber – I was no longer taken seriously…”) Even after shooting on Dumb and Dumber had already started, the studio still attempted to find an excuse to fire Daniels, but ultimately backed off efforts to get rid of him after seeing the first week’s worth of footage.

1030: According to a 2009 study by Mark Hoekstra et al from the University of Pittsburgh, The Financial Consequences of Winning the Lottery, covering 1,900 Florida lottery winners who won $50,000 to $150,000, these winners were significantly more likely to go bankrupt within five years than small time lotto winners (under $10,000), and about twice as likely to go bankrupt over the normal population.  Just as significant, before winning, these $50,000-$150,000 lotto winners were no more or less likely to go bankrupt than the general populace.  The act of winning $50,000-$150,000 itself doubled their chances of going bankrupt.  Further, according to wealth counselor Szifra Birke, approximately 1/3 of all big ticket lotto winners and others who suddenly come into wealth will file for bankruptcy within 5 years of receiving the massive cash influx. Equally surprising is that it didn’t seem to matter in these bankruptcy outcomes whether people spent the money on hookers and blow or used it to start a business. As for the reason, Birke hypothesized, “…if they have not acquired good money skills prior to this windfall, often they struggle and make poor choices” including when starting a business where they generally approach fixing problems by throwing money at it instead of developing sound business skills and a business that can be self-sustaining.

1031:  Ever wonder what the “PEZ” in PEZ candy stands for? Well, wonder no more- “PEZ” derives from the German word for peppermint, “pfefferminz.”  PEZ started out as a peppermint breath mint company in Vienna, Austria in 1927, originally sold in tins, and later, starting in the late 1940s, in the now iconic PEZ dispensers. These dispensers were originally in the form of a cigarette lighters, which the company states was to market their bricks as “anti-smoking” mints.

1032: Lloyd Christmas’ chipped tooth on Dumb and Dumber was not the result of some prosthetic, but rather that Jim Carrey genuinely has a chipped tooth. As to how he chipped it, Carrey stated in a 1995 interview this happened when, “Clark La Prairie jumped on my head in grade school detention.” He had long had it capped, but decided to have the cap removed for the movie to give the character a bit of a goofy grin.

1033: Ever wonder who the Cliff from Cliff’s Notes was?  Cliff Keith Hillegass dropped out of a Master’s program studying physics and geology at the University of Nebraska in 1939, got married, and took a job working for the Nebraska Book Company. 19 years later and still working for the same company, Cliff struck a a deal with book store owner and maker of the famed Cole’s Notes, Jack Cole, to launch CliffsNotes in the United States. The first run published in 1958 comprised 16 of Cole’s Notes’ Shakespeare study guides, all funded via a $4,000 loan (about $35,000 today).  The study guides were a hit, selling a reported 58,000 copies in the early going allowing Cliff to expand his enterprise from there.  41 years later at the age of 81 and having sold a reported 50 million guides, Cliff retired from CliffsNotes, selling the company to IDG Books for $14 million (about $21 million today).  He died about two years later in 2001 after suffering a stroke.

1034: Mr. T’s path to stardom largely began because of his reputation as a bouncer, which landed him very lucrative offers as a body guard, protecting everyone from prostitutes to politicians and even the likes of Muhammad Ali and Michael Jackson.  By 1980, this all led to him appearing on NBC’s “America’s Toughest Bouncer” where he was spotted by Sylvester Stallone, with Stallone intending to use him in a minor role in Rocky III.  However, this role was quickly expanded, with Mr. T being given the main part of Clubber Lang, launching his acting career.

1035: The first person to use the “temporary insanity” defense in the United States, onetime U.S. Senator, Union General, and Congressman Daniel Sickles, did so after murdering district attorney Phillip Barton Key II, son of the author of the Star Spangled Banner, Francis Scott Key.  Despite that Sickles cheated on his wife, Teresa Bagioli, countless times (including bringing famed prostitute Fanny White, instead of his wife, with him on one diplomatic trip in which he even introduced White to Queen Victoria), he didn’t take kindly to his wife mimicking his behavior. So when he found out his wife was having an affair with Key, he forced her to write a detailed confession and took her wedding ring from her.  The next day when Key attempted to set up another liaison with Mrs. Sickles by signaling her when walking by her house, Mr. Sickles grabbed three guns and promptly murdered Key in front of about a dozen witnesses. The public (at least during the trial) was largely on Daniel Sickles’ side and he was ultimately acquitted on the novel grounds of “temporary” insanity.  (The public would soon largely turn against him, however, not because of the hypocrisy demonstrated in his own rampant infidelity, but rather because he forgave his wife and didn’t divorce her.)