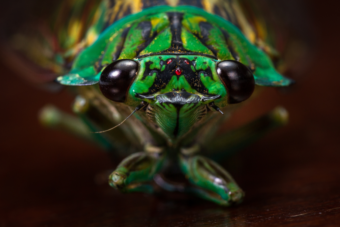 Cicadas are big, green and gross. They fly, have giant eyes and make loud clicking noises. (A male swarm of these insects can produce noise at over 100 dB!) Oh, and they are often seen in large groups – like by the millions. If you think this sounds like a nightmare or a beginning of a cheesy horror movie, you wouldn’t necessarily be wrong. However, cicadas are harmless and essentially only survive as a species because of their sheer numbers and weird life-cycle which has ensured that no predator has evolved to specifically depend on them as a food source. Here’s a brief primer on the very fascinating, bizarre world of the cicada.

There are two general types of cicadas in terms of their life cycles, and about 3000 species of the insect in total. The much less talked about annual, or “dogday,” cicadas emerge basically every late summer. While some annual species of cicadas do have multi-year life cycles, overlapping generation of adults makes it so they appear yearly. These type are known for their large wings, green bodies, brown eyes, distinctive clicking or humming noise that is sometimes called the “song of the summer.” Others say it sounds like a rusty chainsaw cutting through a tree trunk. These types of cicadas appear all across America, from the Southwest to the Mid-Atlantic region.

But it’s the periodical cicadas that are really fascinating. That’s because they emerge only every 13 or 17 years (depending on the brood, which we will get to in a moment), making them one of the longest-living insects on Earth. They come out by the millions and often overwhelm trees and fields – leading some to speculate that they are the biblically-referenced locusts. (This seems unlikely for a variety of reasons, however.)

When emerging, the different broods can sometimes overlap, creating dense clouds of cicadas that some scientists actually think is a survival technique. Since cicadas are completely harmless to animals and humans (even to eat), their high numbers all at once prevents total annihilation. Even if birds (or the occasional human) gobbles up thousands of cicadas, there are plenty more around.

On top of that, there’s a belief that their prime number (13 & 17) life cycles also provide some level of protection. As far as anyone knows, there’s no predator that’s specifically evolved to prey on the North American periodical cicada. Their life cycles are simply too irregular for any creature to depend on them as a food source. So when they come out en masse, it just means a better year for food for a lot of insect eating animals (and potentially a bad year for many trees), but also that there won’t be so many predators around as to put too much of a dent in the cicada numbers.

In any event, Cicadas begin their life as a grain-of-rice-shaped egg on a tree branch, deposited there by their mother. Creating a groove using the female’s ovipositor, these grooves provide cover and expose the tree’s fluids which the soon-to-be-hatched cicadas feed on. Unfortunately, when too many cicadas use the same tree branch, the branch can die, with the result called flagging.

Upon hatching, the baby cicadas – which look like small white terminates or ants – feed on the water from the branch before falling to the ground. The young cicadas burrow themselves into the ground, continuously tunneling and sipping the fluid from the tree roots.

At this point, the cicadas can remain underground for years living in a state of suspended development, waiting for other members of their brood to catch up in growth.

In 13 or 17 years, cicadas nymphs finally emerge and climb their home tree, shedding their exoskeleton in another nightmarish image. Free from their old skin, their wings come out and inflate with fluid, while their adult skin hardens.

As for what they get up to once in adulthood, adult cicada males spend their brief above ground life making those loud clicking, humming noises to attract females. When a female is attracted to the tune of their song, they mate. After completing the mating cycle, the shivering racket in the trees begins to fade, and the adult cicadas drop dead (sometimes in the billions per brood) within a few weeks of emerging from the ground, with their bodies ultimately making massive piles that must be raked and shoveled.

At this point you might be wondering how the cicadas all know when to emerge after living entombed for so long deep in the dark ground, particularly as the environment they live in more or less has relatively static conditions (typically 1-8 ft. deep) in some regions.

The specific date-range of emergence once the magic year comes seems partially based on soil temperature. When talking about their whole life cycle, it’s also partially based on growth. Nymphs go through five stages of development underground, each averaging about four years (except for the first stage). However, each one develops at a different rate based on a variety of factors, but often waits for their fellow brood members to match them before emerging.

So how do they know when it’s time for everyone to emerge after so many years? It was once thought that the secret lay in an internal body clock where they are keeping track of the passage of night and day and the seasons, despite not necessarily having as many direct environmental cues as you find above ground. So even if some group of them are fully developed early, they still know to wait until the right year based on these environmental cues.

Seems like a pretty solid theory.  However, this sort of vague answer doesn’t actually appear to be quite what’s going on, being more of a correlation thing than a causation, which we now know thanks to an experiment done at University of California.  The experiment was designed to test if the cicadas are picking up on cues from, not night or day or temperature patterns directly, but the trees themselves which they are feeding off of.  It turns out, this does appear to be the case.

The experiment tested this by taking peach trees and manipulating them to get them to blossom twice a year, instead of just once.  The researchers then took cicadas that were 15 years old and placed them in the soil of the peach trees that would blossom twice in one year.  The results was that after the second blossom of the peach trees, the 17 year cicadas emerged after just 16 years.  So it appears the cicadas seem to keep track of how many springs there have been using the tree sap in the roots, which during spring will have an upswing in sugars and the like.  When these cicadas detect the 17th upswing, they emerge.

While this may seem like something that only happens in a lab environment, this isn’t the case at all.  For instance, if there is a particularly early spring (which is happening more and more in recent years), with many trees leafing out, and then it freezing, resulting in a second leafing of the trees, the cicada feeding on those specific trees seem to interpret this as a complete cycle, thus coming out a year early if they’re developed enough. If this happens multiple times within a brood’s life-cycle, they may even emerge several years early. This is what is thought to have happened in the Mid-Atlantic region this year where a smallish number of cicadas from Brood X emerged four years early. If enough of them emerge at a different time than the rest, it can even create a whole new brood.

But, in the end, other than some finding them more than a little annoying when the creatures emerge en masse, cicadas are otherwise harmless (unless you’re a tree), terrible-looking bugs with a truly bizarre life-cycle. For those who really hate them and want to do something about the cicadas, it should be noted that some people find them very tasty to eat, with the flavor often described as a bit like asparagus…