Do Mounted Police Officers Have to Clean Up Their Horse’s Poop? 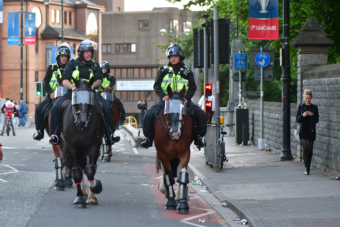 Mounted police are a common sight in many cities across the world; a reasonable sized draft horse, which is usually what such officers use, produces about 40 pounds (18 kg) of feces per day or about 14,000 pounds (roughly 7,000 kg) per year (not to mention about a thousand gallons of urine annually). A typical police horse will work around eight hours per shift, five days a week. This means that for each police horse, around 3,000 pounds (1,400 kg) of poop finds its way onto city streets and sidewalks annually. So whose job is it to clean up this massive amount of fly pie? While rules vary from place to place, in the vast majority of cases, not the police, though they are generally encouraged internally to pick it up whenever possible anyway.

For example, in the FAQ page from St Paul’s Mounted Police Foundation in Minnesota concerning this exact matter: “By law we are not required to clean up after our horses while on patrol.” That said, they go on to note that mounted officers “make every attempt” to clean up poop if it falls in “unwanted areas” such as a public footpath or outside of a restaurant, so long as it doesn’t impede their official duties.

Back across the pond, many police departments are oddly coy about discussing this topic, with the NYPD in particular seeming to regularly refuse to respond to requests for comments from papers about whose job it is to clean up the poop left by police horses. For example, in 2013 the New York Post reached out to the NYPD while covering a story about horse turds being left to fester in the street in the Lower East Side after routine patrols. The NYPD refused to comment on the matter. However, the Post eventually discovered that it is officially the New York Sanitation Department’s job to clean up after equestrian officer’s leavings. Why the NYPD didn’t just say this is unclear.

The NYPD has similarly refused to comment on why their horses don’t wear specially made horse diapers, which really are a thing. In fact, by law, all carriage horses in the New York parks and certain other areas must wear such a device. The specific law is:

Anyone who drives a horse-drawn carriage… is required to equip it with horse hampers, horse diapers or some other similar manure catching device which is effective in preventing manure from being deposited on any park street, road or way.

This rule doesn’t apply to NYPD horses for unspecified reasons.

An almost identical law exists on the books in Washington D.C. and, again, police horses are likewise exempt. As in New York, there’s no explanation as to why, with the closest we could find to an official answer being an offhand remark from an officer saying they looked into getting horse diapers at some unspecified point, but opted not to use them. The officer, one Michael Lauer, never goes into any detail why and instead explains that mounted officers carry around a plastic bag and may clean up after their horse if it poops in a high traffic area.

Mounted officer Tom Stewart also notes, “If we’re out riding and the horse has a drop, we just make a note of it. Before we leave the beat, we ride back with the truck and pick it up”.

However, once again, mounted D.C. officers aren’t required to clean up after their animals and can, if they so choose, leave the poop where it is, even if the officer is not otherwise busy or in a location that would be dangerous to do so.  Nonetheless, Lauer does emphasize that, “Our officers and riders have been very diligent about the cleanup” and that one unspecified officer even managed to train his horse to only defecate in specific places along his beat that would not trouble anyone.

A possible explanation concerning why American police horses don’t wear diapers, like horses used for commercial purposes are often required to do, is given by the Australian mounted police- namely, that the diapers could potentially hinder a horse in full gallop.

Proponents of including police horses in laws requiring city horses to wear such, however, note that the vast majority of the time mounted police are deployed they are not galloping around. On top of that, it’s also speculated that in full gallop, the diaper would likely just fall off anyway, making it mostly a non-issue in the rare instances where an officer induces their over half ton charges to break into a full gallop in public areas.

All this said, as far as we can find, nobody on either side of the argument seems to have actually tested the “full-gallop diaper” thing to see if it would actually be a problem or not. And it isn’t clear whether proponents and opponents are all just speculating or are speaking from experience with galloping diapered horses (which is a phrase I’d never previously thought I’d find myself writing).

Whatever the case, one place where equestrian cops seems to be borderline required to clean up after their animals is Canada. In fact, Canadian mounted police, in addition to being equipped with shovels and plastic bags to clean up poop, are asked, if the poop falls onto a public walkway or the like, to use their heavy soled, polished boots to kick any stray droppings they can’t remove into the street for a cleaning crew to pick up later.

That said, given the nature of their duties, Canadian authorities note that it isn’t always feasible for officers to dismount and clean up after their horses. On top of that, sometimes the officers simply don’t notice their horses poop. Thus, any citizens who spy a stray horse puck are encouraged to call city services who will then come clean it up.

At this point you might be wondering why mounted police are even a thing anymore at all. To answer that, the NYPD’s website notes,

The Mounted Unit pursues a four-fold mission which consists of Traffic Control, Crowd Control, Community Relations, and Prevention of Street crime. Public relations is a Mounted Unit forte. Seldom is public attention so magnetically drawn to police as it is to a officer on horseback. The expertise of Mounted unit Officer in crowd control is also renowned. Our officers are used extensively at concerts, demonstrations, strikes, entertainment events, public celebrations, and the numerous assemblages that take place throughout the year. It has been estimated that one Mounted Officer on horseback has the effect of ten officers on foot, depending on the demeanor of the crowd. The Mounted Unit has therefore earned the reputation for being in the vanguard whenever the Police Department is called upon to ensure the order and safety of the large throngs of people frequently found in the nation’s largest and most dynamic city.

It is also noted that mounted officers have a much better ability to scout and spot developing issues vs officers on foot in such crowded scenarios due to how high off the ground they are. (In fact, the NYPD has a minimum height of 15.2 hands, 5.1 feet or 1.6 metres, on their horses.)

Mounted officers also often state they just prefer having a horse along when giving tickets and the like. Sergeant Joseph Haertsch of the LA mounted police elaborates that when arresting a guy from a police car, invariably that individual’s significant other will “want to hit you in the head with a pan”, but when doing it with your trusty horse at your side “instead they are petting the horse… Nobody’s ever come up to me and asked me to pet my patrol car”.

Retired mounted officer and professor of criminal justice at Penn State, Jim Ruiz, further notes, “You may have the biggest jerk in uniform, but all the public sees is the horse.”

Ruiz also praises the mounted officer’s superior ability to catch bad-guys in parks, alleys and other such places a patrol car may not be able to go. “We used to have an axiom in mounted, ‘If you run from us, you’ll only go to jail tired.’”