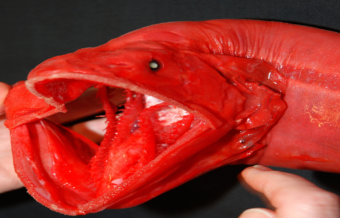 Not even close to the size of a whale and bearing only a modest similarity to the most familiar kinds of fish, if it weren’t for the fact that the dozen or so species of flabby whalefish are relatively small, the mere thought of such strangely-built, sightless monsters swimming in the depths of the ocean would keep most of us out of the sea.

First, it should be noted that so little is known of this family of fish, called Cetomimidae, that until quite recently (2009), its juvenile form was thought to belong to a completely different family – Mirapinnidae. Commonly known as tapetails, these tiny fish (only an inch or two in length), display several hair-like projections and a long, flat tail, like that of a kite, off of their caudal (tail) fins.

In fact, other than the tiny size, the only other feature of a juvenile whalefish that resembles one of its adult forms (the female) is its overlarge mouth, which it uses to consume as much shellfish as possible.

The second most important fact to note about flabby whalefish is that mature adults in this family, depending on the sex, look so different (called sexual dimorphism) that at one time the males were thought to also belong to another family of fish, Megalomycteridae.

However, even as adults, the two sexes have a few things in common, which include the lack of a swim bladder or effective eyes (they are either vestigial or very small), and their fins are set farther back on their bodies when compared to many other kinds of fish. Their fins also lack spines.

On top of this, both sexes are brightly colored (red or orange). But as these longer wavelengths cannot penetrate the depths where the flabby whalefish live, accordingly, they appear, effectively, black to their neighbors. And, living at depths between 2,100 and and an astounding 12,000 feet (640 to 3700 meters) below sea level, to “see” flabby whalefish rely on a series of sensory pores that run the lengths of their bodies which can detect even tiny vibrations in the water.

However, as previously noted, there are also significant differences in the sexes. The females, which can grow up to 1.3 feet in length (about a half a meter), are much larger than the males, which only get to be about 1.5 inches (3.8 cm). Experts have opined that this difference may be attributable to the relative scarcity of food in the deep ocean, with the idea being that such tiny males would not compete with the females who require more nutrition to create the next generation.

This theory is also supported by the very different feeding habits of the adults.  The females have large mouths and highly distensible stomachs that allows them to consume prey that are as much as twice their normal size.

On the other hand, the males’ mouths, or more particularly, their jaws, are fused so that, in their adult forms, the males cannot take in any new food whatsoever. Even if they could open their mouths, it would do them no good.  When they transition to adulthood, their esophagus and stomach somehow disappears, while at the same time their liver enlarges. They survive by metabolizing the digested remains of prey they ate while in their juvenile forms that still resides in their intestines. When that’s all gone, it is thought that they die of starvation shortly thereafter.

On that note of uncertainty, flabby whalefish live at such remarkable depths that little else is known about them – including even their lifespans or how exactly they mate.