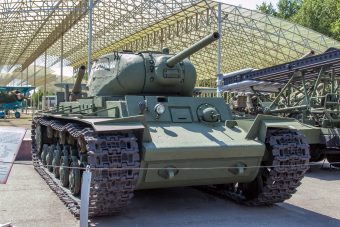 The KV-1 and KV-2 are recognised as being amongst the most heavily armoured tanks deployed during WW2. At least initially largely impervious to anything less than a direct, point-blank hit from a dedicated anti-tank weapon, the KV series was so formidable that the first time the Wehrmacht encountered them, Soviet soldiers destroyed dozens of anti-tank guns by simply driving towards them in a straight line and running them over.

Introduced in 1939 and named for famed Soviet officer Kliment Voroshilov- a man who once personally tried to attack a German tank division with a pistol- the KV series was designed to replace the T-35 heavy tank, which was somewhat mechanically unreliable and costly to produce. The extremely heavily armoured KV series was first deployed during the Soviet Union’s 1939 war with the Finnish and then subsequently used throughout WW2.

The KV series was effectively designed with a single feature in mind- survivability. Towards this end, it was equipped with exceptionally thick armor. While this thickness varied somewhat based on model, for reference the KV-1 boasted armor that was 90 millimeters thick (3.5 inches) on the front and 70 millimeters (2.8 inches) on the rear and sides.

Of course, there’s always a trade-off in anything, and the thickness and weight of the KV’s armor came at the expense of almost everything else- the tank was slow, had limited maneuverability and firepower relative to what you’d expect from a tank this size, and, to top it all, had exceptionally poor visibility. In fact, it’s noted that Soviet commanders frequently complained about the tank, despite the defensive protection it offered. These sentiments weren’t echoed by the German troops who initially encountered this moving shield.

The KV-1 and KV-2 (the two most popular models of the tank) were nearly invincible during initial skirmishes with the Germans, as few anti-tank weapons they possessed could punch a hole through the armor, and even the ones that could required uncomfortably close range to do it.

As noted by an unspecified German solider in a 1949 report compiled by the U.S. Army’s Historical Division,

…there suddenly appeared for the first time a battalion of heavy enemy tanks of previously unknown type. They overran the armored infantry regiment and broke through into the artillery position. The projectiles of all defense weapons (except the 88-mm. Flak) bounced off the thick enemy armor. Our hundred tanks were unable to check the twenty enemy dreadnaughts, and suffered losses. Several Czech-built tanks (T 36’s) that had bogged down in the grain fields because of mechanical trouble were flattened by the enemy monsters. The same fate befell a 150-mm. medium howitzer battery, which kept on firing until the last minute. Despite the fact that it scored direct hit after direct hit from as close a range as two hundred meters, its heavy shells were unable to put even a single tank out of action…

In another account, a German soldier in the 1st Panzer Division noted,

The KV-1 and KV-2, which we first met here, were really something! Our companies opened fire at about 800 yards, but [they] remained ineffective. We moved closer and closer to the enemy, who for his part continued to approach us unconcerned. Very soon we were facing each other at 50 to 100 yards. A fantastic exchange of fire took place without any visible German success. The Russian tanks continued to advance, and all armour-piercing shells simply bounced off them. Thus we were presently faced with the alarming situation of the Russian tanks driving through the ranks of 1st Panzer Regiment towards our own infantry and our hinterland. Our Panzer Regiment therefore about turned and rumbled back with the KV-1s and KV-2s roughly in line with them.

The former report also notes that a lone KV tank (the exact model isn’t clear) simply parked in the middle of the road blocking the main supply route and sat there soaking up anti-tank rounds for several days. “There were practically no means of eliminating the monster. It was impossible to bypass the tank because of the swampy surrounding terrain.”

Among the initial armament brought against the troublesome tank were four 50mm anti-tank guns. One by one the tank took them all out suffering no meaningful damage itself.

Frustrated, the Germans commandeered a nearby 88mm anti-aircraft gun, positioning it a few hundred feet behind the tank (basically pointblank range for a gun design to rip planes in half). While this weapon was capable of piercing the tank’s armor at that range, before they could fire, the KV turned the gun’s crew into a pink smear.

Next up, the Germans decided to send an engineer crew in under cover of darkness to try to take it out up close and personal. While they did manage to get to the KV and attach demolition charges, it turned out they underestimated the needed explosive power and only a few pieces of the tank’s track were destroyed, leaving the tank still fully functional.

As for the tank crew themselves, they initially received needed supplies to continue their barrage on the Germans via cover of night. However, ultimately the Germans were able to cut off supply access to the tank and then sent a whopping 50 of their own tanks in to take it out, or that was seemingly their plan; while the massive number of tanks were approaching and occupying the attention of the KV crew with their limited visibility, the Germans were able to, according to the 1949 account from the unnamed German soldier, “set up and camouflage another 88-ram. Flak to the rear of the tank, so that this time it actually was able to fire. Of the twelve direct hits scored… three pierced the tank and destroyed it.”

Of course, all good things must come to an end and the KV line’s many limitations saw it quickly go from a near impervious mobile fortress to a virtual sitting duck, with German forces reacting to it by developing new explosive anti-tank rounds fully capable of taking the KV’s out.

While still used throughout the war, once this happened, the KV’s were largely replaced by the more well-rounded T-34 tank. Still, it’s impossible to argue that the KV didn’t make one hell of a first impression, even if, ironically enough, it didn’t have staying power.