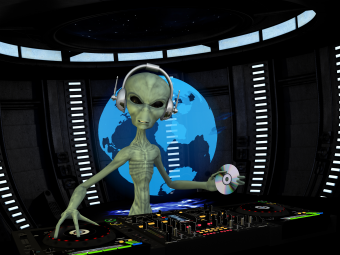 Nobody is really quite sure how the tradition of waking up NASA astronauts with pieces of music got started; NASA itself only notes that “Wake-up calls are a long-standing NASA tradition.” However, archivist and historian Colin Fries, who has painstakingly tracked down every example of a song or clip played by NASA in such a scenario going all the way back to 1965, is fairly confident that the earliest example of such a wake-up call occurred during the 1965 Gemini 6 mission on December 16th, likely as a joke. During this mission, astronauts Walter Schirra and Tom Stafford were woken up by a recording of singer Jack Jones and Hello Dolly.

According to Fries, earlier missions in the Gemini program and the manned missions of the earlier still Mercury program were too short to require the need for wake-up calls.

This musical wake-up call quickly became a regular occurrence intended as a way of bolstering morale while allowing astronauts a few minutes to wake up slowly before having to respond to ground control. Over the years, wake-up calls became one of NASA’s most beloved traditions, with the role of picking the songs given to the mission’s Capsule Commander (CAPCOM)… Yes, just to be clear, not only do these people get to put CAPCOM for NASA on their resume, but they can also add in “Space DJ”.

The songs chosen over the years have been wildly eclectic, ranging from classical music by composers like Bach and Beethoven to the latest hits of Metallica and the Beastie Boys. These songs are largely chosen in accordance with the tastes of the astronauts aboard whatever craft. Towards this end, before a mission, the individual tasked with handling communication with those in orbit (the aforementioned CAPCOM) will often ask family and loved ones of the astronauts if there’s a particular piece of music said individual might like to hear while in space.

Thanks to the extensive records NASA keeps, we not only know every song played for astronauts in orbit since 1965, we also have the astronaut’s responses to some of the more unusual choices played. For example, for a 2008 mission aboard the Space Shuttle Atlantis, officially designated as STS-123, CAPCOM played a brief snippet of the theme song from the presumably epic film Godzilla VS Space Godzilla as well as part of the Blue Oyster Cult song, Godzilla, for Japanese astronaut Takao Doi, signing off by saying:

An amused Doi responded that he was “happy to hear Godzilla,” before himself signing off to get to work. According to Fries’ extensive archives, Godzilla’s iconic theme song is apparently a popular choice for Japanese astronauts, as are the themes from other well-known films like Star Wars, Star Trek and Rocky.

Predictably, songs with a space theme are also popular choices, with David Bowie’s Space Oddity and Elton John’s Rocket Man being noted as some of the most commonly played.

Given the inevitably varied tastes of astronauts taking part in missions, the choice of songs has caused some good-natured friction between them. A notable example is the song Wild Blue Yonder– better known simply as The Air Force Song, chosen as many astronauts come from the Air Force. This has led to complaints from members of the Navy taking part in missions when it’s played multiple times.

On another occasion, the aforementioned Steve Robinson found himself with something of a dilemma on his hands when a superior insisted he play Wild Blue Yonder, while the wife of one of the astronauts asked him to play a Barry Manilow’s, A Little Traveling Music, Please; stuck between a rock and a hard place, Robinson’s solution?

I played ’em back to back. I thought they would cancel each other out… The only complaints were from the navy guys on the crew. But I’m not sure if they were complaining about the Air Force Song or Barry Manilow…

In addition to songs, NASA has, at various points, played private messages recorded by the astronauts’ loved ones (including the occasional singing of “Happy Birthday” where applicable) and even occasional messages from celebrities. Notable examples of the latter include personalised greetings from William Shatner, Paul McCartney and Elton John, a skit performed by Jim Henson involving Miss Piggy, and even a song sung by Darth Vader set to backing music from The Beatles.

Perhaps best of all was the crew of Atlantis on November 25, 1991 being woken to none other than Patrick Stewart stating (with Star Trek: The Next Generation theme music playing in the background),

Space: the final frontier. This is the voyage of the Space Shuttle Atlantis. Its ten-day mission: To explore new methods of remote sensing and observation of the planet Earth… To seek out new data on radiation in space, and a new understanding of the effects of microgravity on the human body… To boldly go where two hundred and fifty-five men and women have gone before!

Hello Fred, Tom, Story, Jim, Tom, and especially Mario — this is Patrick Stewart, choosing not to outrank you as Captain Jean-Luc Picard, saying that we are confident of a productive and successful mission. Make it so.

Finally, while it’s noted that ultimate control over the playlist in space is down to the discretion of CAPCOM alone, it’s generally agreed not to wake up astronauts with too startling of music. This said, some CAPCOMs have chosen to ignore this for their own amusement, such as Commander Chris Hadfield once waking up the crew with an extra loud U2 rendition of the Mission: Impossible theme song.

In another somewhat jarring instance, in 2001 the crew of mission STS-98 was woken to perhaps the most annoying song in the history of music- Who Let the Dogs Out. (And, in fact, Rolling Stone named it the third most annoying song in history behind My Humps, by Black Eyed Peas, and- mother of god- Macarena, by Los Del Rio. *shudders*) Why was Who Let the Dogs Out chosen for the crew of STS-98? Kenneth Cockrell, the pilot for the mission, was previously a member of mission STS-69 in 1995, with the crew of that mission nicknamed the Dog Crew II.

As for today, with the retirement of the Space Shuttle program, this wake-up call tradition has partially been left in the dustbin of history, though occasionally is still observed on the International Space Station, and presumably will be reinstituted as a regular activity once NASA begins sending people to space themselves again.