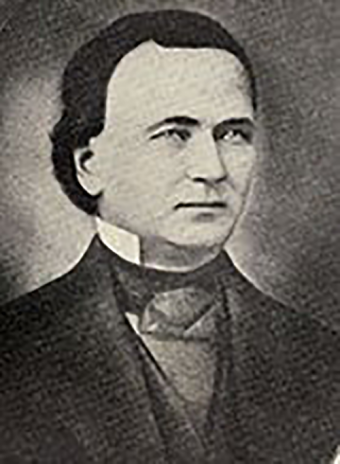 Walter Hunt is a man who is simultaneously considered to have possessed one of the finest inventive minds in all of American history while also being an individual almost no one has ever heard. This is despite the fact that it’s almost guaranteed that one of his inventions is currently lying somewhere in your home, the safety pin. This was something he sold the patent for for a few hundred dollars, reportedly as he needed the money to pay off a $15 debt. This was a theme throughout his life- inventing various items that otherwise should have made him extremely wealthy and famous, but which never did because of his proclivity to sell his patents immediately and move on to his next great invention.

Because we’d be here all day if we discussed in any level of detail everything Hunt patented during his lifetime, instead we’ll give you a small smattering of examples so you can get an idea of how prolific an inventor he was. Along with the safety pin and the first commercially viable lockstitch sewing machine, Hunt invented and patented a more efficient oil lamp, an attachment to boats that allowed them to break through ice, various improvements on bullet and casing designs, a rope making machine, a machine that made nails, an improved fountain pen, a portable knife sharpener, an innovative saw, a coal heated convection oven, an early version of the repeating rifle, and, most incredibly of all, a device that allowed the user to walk on the ceiling, dubbed the “antipodean apparatus”, which he sold to a circus.

While some of these inventions are antiquated and seldom used today, others were pretty revolutionary, in particular the repeating rifle, which Hunt dubbed the Volitional Repeating Rifle. He sold the patent for that to a businessman, George Arrowsmith, who then sold it to the founders of Smith and Wesson, Benjamin Tyler Henry, Horace Smith, and Daniel B. Wesson. The design of Hunt’s rifle was studied by and improved upon by the trio, eventually serving as the basis for the Henry Repeating Rifle, famed for its widespread use in the American Civil War. This latter rifle, in turn, was the basis for the more famous Winchester Repeater, arguably one of the most famous guns of all time. Hunt saw little recognition for his contributions to the weapon and never received any royalties or payment beyond the relatively paltry sum given for the original patent, which was basically the story of Hunt’s life.

Born in 1796 on a small farm in Lewis County, New York, Hunt’s beginnings were humble and his education was surprisingly lacking for a man who’d later be renowned for his keen mechanical mind. Supposedly educated in a one room schoolhouse, Hunt, the eldest of thirteen children, left formal education in his early teens and settled into the life of a simple farmer. However, his curiosity for tinkering soon found him helping out at a nearby textile mill, where many of his family members worked and where he helped the owner, Willis Hoskins, and another worker, Ziba Knox, make improvements to a flax spinning machine used there.

Despite helping the pair improve the machine, the young Hunt was left off the patent. However, soon after this, Hunt went and invented an even better flax spinning machine and patented that in 1826. Hunt then endeavoured to manufacture and sell this machine to secure a better life for himself and his young family. (He married his childhood sweetheart in his teens and eventually the pair had four children.)

Towards this end, Hunt travelled to New York and attempted to find investors to back production, but became increasingly frustrated when nobody would give him the time of day. (It’s presumed Hunt’s small town upbringing and lack of formal education made it difficult for him to assure banks and investors he could be trusted with their money.) Running short on funds, Hunt sold the patent for the machine, using the funds to relocate his family to New York, hoping to find his fortune there with his next invention.

In 1827, Hunt filed for his second patent, this time for a foot operated gong to be fitted in carriages. Hunt was said to have been inspired to create this device after witnessing a small girl hit by a horse carriage. This sort of thing was not totally uncommon at a time when carriages and people shared the road. To help get around the problem, many carriages had air horns installed. However, to sound the horn required the driver to have one hand free to operate it, which was occasionally a problem if both hands were needed to drive the horses. A foot pedal operated gong neatly solved the issue.

Again, despite the appeal and necessity of his invention being immediately obvious, Hunt similarly had trouble securing an investor to fund manufacturing of the device and so he sold the patent and moved on to his next invention.

Why Hunt opted to nearly always choose to sell his patents outright rather than hold onto them or ask for royalties as a part of the sale agreement isn’t fully clear, though given that he was not independently or otherwise wealthy, one assumes he simply always had need of the money to support his family, so was inclined to take the quick money, rather than lesser amounts upfront but better long term prospects in royalties. And given how prolific an inventor he was, it may well be he just always assumed he’d be able to come up with something new to keep money coming in, which, to be fair, is exactly what happened throughout his life.

Perhaps the best example of Hunt selling a world-changing patent occurred in 1849 when a draftsman called J.R Chapin began pressuring Hunt to settle a $15 debt (about $422 today). Low on funds, Hunt did what he always did to settle debts- he sat down and invented something- the modern safety pin, reportedly after just three hours of playing around with a spool of wire.

While Hunt’s invention wasn’t a totally new idea, with variations on clothing pins going all the way back to the 14th century BCE, it was a massive improvement on anything that came before thanks to the clasp at the end keeping anyone from getting poked and the coiled wire design giving enough spring to keep the pin locked in place even as the person wearing it moved around.

Just as important to the design being extremely functional, the whole thing was also incredibly easy and cheap to manufacture. As a testament to the design’s simplicity and functionality, unlike many products that have evolved over time, in the near two centuries since Hunt invented the safety pin, the basic design hasn’t really changed at all.

As he had done so often before, Hunt sold the patent for the safety pin for a reported $400 (about $11,000 today), with the rights to it ultimately ending up in the hands of W.R. Grace and Company, who would go on to make many millions of dollars off the product.

Perhaps Hunt’s third most famous invention, outside of the safety pin and the repeating rifle, was one of the first commercially viable sewing machines that used a then revolutionary two threaded lockstich mechanism (see a graphic of how it works here) still commonly used today. Legend has it Hunt refused to patent his 1833 automated sewing machine invention because he didn’t want to put seamstresses out of work, so didn’t push the invention with various companies as he didn’t want to see it made.  However, this commonly touted notion seems questionable as, while he didn’t patent the idea, he did sell the rights to make the machine to the aforementioned George Arrowsmith.

Arrowsmith then attempted to manufacture the sewing machine, but had difficult raising the needed capital from investors owing to something of an overabundance of seamstresses working on the cheap at the time. Thus, he gave up on the project, choosing, like Hunt before him, to not even bother patenting it.

It would be over a decade after this before someone else would come up with another commercially viable sewing machine- most notable to the story at hand, Elias Howe, Jr.

Howe seemingly independently invented and patented his own lockstitch sewing machine that pretty much worked exactly like Hunt’s.  Soon after, various companies, most notably Singer Sewing Machines, started copying and selling Howe’s design, at which point Howe began suing them.

During the course of litigation, Hunt’s previous invention was brought to light, with the companies then arguing that Howe’s patent was invalid because Hunt had long before invented more or less the same machine using the innovative lockstich. And as Hunt hadn’t patented his design, they felt they were free to copy it.

It was at this point that Hunt himself got into the game and decided to see if he could retroactively get a patent or otherwise force said companies to pay him for use of his design. At the same time, he began work once again on the sewing machine, coming up with an improved design that solved the then common jamming problem via automatically feeding the cloth in at an even rate, and then patenting that improvement. True to form, he swiftly sold the rights to the patent after receiving it.

While the patent office refused to give Hunt a retroactive patent for the original design, they did acknowledge that he invented the device, but that Howe’s patent was still valid owing to Howe having applied for a patent first. Nevertheless, in 1858, Singer Sewing Machines, which is still around today, settled with Hunt out of court, agreeing to pay him $50,000 (about $1.4 million today) for their copying his original design and subsequently making a fortune off it.

And so it was that Hunt finally made a small fortune off one of his inventions… right?  Well, no. He died of pneumonia shortly after the agreement was made and before the $50,000 settlement was due to be paid to him. His family, however, reportedly did benefit from the settlement.

Funny enough, Hunt’s final resting place is in the same cemetery as Howe’s, Green-Wood Cemetery in Brooklyn. Seemingly fitting given how his life went, Hunt’s grave marker, while more than a simple gravestone as is often reported, is dwarfed by Howe’s mini-monument.

In the end, while he never made a fortune off his various inventions that did make other people rich, nor was he well-known in life or death like so many other prolific inventors, the New York Tribune did at least publish an article about Hunt after he passed away, noting,

For more than 40 years, he has been known as an experiment in the arts. Whether in mechanical movements, chemistry, electricity or metallic compositions, he was always at home: and, probably in all, he has tried more experiments than any other inventor.