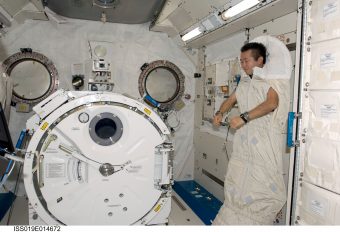 Just because you’re not an astronaut, that doesn’t mean you can’t contribute to the space program. You don’t even have to get out of bed. Meet the “pillownauts.”

Today we take it for granted that astronauts can function in the weightlessness of spaceflight, but at the dawn of the space age in the early 1960s, scientists weren’t sure that was possible. Some experts feared that the shape of the human eye would become distorted in zero gravity, making it difficult for astronauts to see the gauges and controls they needed to operate their spacecraft. What about eating—would astronauts be able swallow their food without the assistance of gravity? And even if they could, would their bodies be able to digest it? If not, the length of a spaceflight might be limited to the amount of time an astronaut could go without eating.

These fears proved to be unfounded, but as the years passed and the duration of spaceflights increased from less than an hour to days, weeks, and eventually months, astronauts on longer missions began to experience physiological changes that were just as worrying to scientists. For each month they spent in weightlessness, astronauts lost as much as one percent of their bone density in the hips and other weight-bearing areas of their bodies, and as much as 3 percent of their muscle mass.

Some of the first Soviet cosmonauts to spend more than 200 days in space in the early 1980s were unable to walk or even catch a ball after returning to Earth. They eventually recovered, but their experience raised the alarming possibility that if a mission was long enough, such as a three-year trip to Mars and back, an astronaut’s health might never recover. Computer models have predicted that astronauts on a mission to Mars could lose as much as half of their bone density, putting them at serious risk of bone fractures. They might land on Mars too fragile to function; if they broke a hip or some other bone on the red planet, they might die before they made it back home.

For this reason, NASA and other space agencies have been studying the effects of weightlessness on human health since the 1960s, both to better understand the changes that human bodies go through, and to test the efficacy of drugs, diet, exercise equipment, and other “counter-measures” in minimizing the deterioration. Much of this research has, of necessity, been conducted on Earth, where weightlessness is simulated in “bed rest” studies in which volunteers are confined to hospital beds 24 hours a day for as much as 120 days at a stretch. Many of the studies take place at NASA’s Flight Research Analog Unit (FARU) at the University of Texas Medical Branch in Galveston, about 50 miles from Mission Control in Houston.

Study volunteers, who’ve become known as “pillownauts,” are typically paid $10 an hour for every waking hour that they participate in a study. That may not sound like much, but it adds up: Since the pillownauts are awake 16 hours a day, they can earn more than $19,000 in a 120-day study that also provides free room and board.

And if you think getting paid $19,000 to lie around for months on end would appeal to a lot of people, you’re right: It’s not unheard of for a bed rest study to attract as many as 25,000 applicants. The pool is carefully screened to select the kinds of candidates that NASA wants to study, namely, people who, like the astronauts, are in excellent shape because they don’t spend a lot of time lying around. Pillownauts are required to be in top physical condition, and must pass some of the same physicals that the astronauts take. Applicants must be nonsmokers between the ages of 24 and 55. They cannot be taking prescription drugs for any chronic medical condition. These and other criteria, including background checks, psychological screening, and even credit checks, help to winnow the 25,000 applicants down to the final 30 or so who are accepted for each study.

…AND NOW THE FINE PRINT

Smoking bans and credit checks are just the beginning. Pillownauts aren’t allowed to consume alcohol or caffeine during the study, nor can they add salt to the bland hospital food that they will live on for the entire length of the study. And they must eat all of the hospital food they are served—no more and no less. That includes any and all condiments that are served with a meal. If a volunteer returns their salad with some of the dressing left in the plastic cup it came in, the cup will be returned to the volunteer so that they can slurp it down to the last drop. Unscheduled snacking isn’t allowed. Nor, for that matter, are conjugal visits or naps outside of scheduled sleeping times. Pillownauts are awakened every morning at 6:00 a.m. and must remain awake until lights out at 10:00 p.m.

The hospital beds used in bed rest studies aren’t level like ordinary beds. If the study is designed to simulate lunar gravity, which is about one-sixth that of Earth, the bed will be tilted up at the head by 9.5 degrees, the angle at which the volunteer’s body, when “standing” in bed, supports one-sixth of its own weight.

Even worse than the lunar beds are the ones used in the zero-gravity studies that simulate a flight to Mars. Those beds are tilted down at the head by about 6 degrees, so that the pillownauts’ feet are 12 to 15 inches higher than their heads. This causes blood and other fluids to flow toward the head, as they do in zero gravity, instead of pooling in the feet like they do on Earth. In this position, watery eyes, runny noses, puffy faces, and swollen sinuses are common. So are headaches, dizziness, toothaches, and nausea, especially during the early days of the study, when the pillownauts’ bodies are adjusting to this unfamiliar new position. Back pain is so common that pillownauts receive hour-long massages every other day for the length of the study. They’re also given special support hose, which they wear in order to prevent blood clots from forming in their legs.

GO WITH THE FLOW

One of the reasons NASA studies subjects who are as healthy as astronauts is because the pillownauts will deteriorate physically over the course of the study. They lose bone density and muscle mass, just like the astronauts do. But unlike the astronauts, they can also get bedsores on their elbows from propping themselves up to eat and reach for things.

The pillownauts’ vital signs are monitored as closely as if they were lab rats. Depending on the study, they may be covered in electrodes, wired up with probes, or both. If a test calls for very precise monitoring of blood pressure, a procedure is performed to insert a catheter directly into the subject’s heart. If a study requires measuring the temperature of the heart and surrounding tissue, a special thermometer is inserted into the pillownaut’s nose and down their throat to get it as close to the heart as possible. Freckle-sized chunks of tissue are regularly snipped from the muscles in the pillownauts’ thighs and other areas and biopsied to measure the change in muscle mass over time.

If the purpose of a particular bed rest study is to test the efficacy of a piece of exercise equipment, such as a zero-gravity treadmill or exercise bicycle, or resistance equipment that simulates weight lifting, the pillownauts will be divided into two groups: one that uses the exercise equipment, and a control group that does not. The pillownauts in the exercise group still don’t exactly escape their beds. They are suspended from the ceiling in harnesses that maintain their horizontal position, allowing them to exercise using fitness equipment that is mounted to the wall.

When pillownauts aren’t being poked, prodded, or hung from the ceiling on straps, they are free to read, watch TV, surf the Internet, talk on their phones, or work on their laptops. There are also regular social periods, when the pillownauts are wheeled into common rooms so that they can mingle with each other, play board games, work on crafts, and engage in other group activities that don’t require getting out of bed. If weather permits, they are wheeled outside into the fresh air.

After a bed rest study has been completed, the pillownauts spend two weeks in physical rehabilitation, where they slowly ease back into standing and walking again. The sensation of blood pooling in the legs for the first time in months can be quite painful, especially in the ankles and feet. And once the blood is no longer pooling in their heads, these sensations are often accompanied by light-headedness. Two or three weeks may pass before the pillownauts are able to stand or walk for any length of time, and it may take them as much as six months to regain the bone mass they lost during the study.

If you’re reading this around tax time, you may not approve of the idea that right now, NASA may well be paying people to lie around and do nothing on the chance that someday we might go to Mars or build a base on the Moon. But if you or a loved one are disabled or have ever spent an extended period of time in a hospital, you may have benefited from NASA’s bed rest research already. The knowledge gained also benefits anyone who spends extended periods in bed: pregnant women, paraplegics, quadriplegics, elderly people in nursing homes, and patients recovering from surgery. In the old days it was thought that the best way for people recovering from surgery to convalesce was to keep them in bed for several days. But now, thanks to information gleaned from NASA’s bed rest studies, patients are encouraged to get on their feet as quickly as possible, in order to speed recovery time.

The International Space Station (ISS), which has been continuously occupied by astronauts since 2000, has given NASA’s best researchers plenty of opportunities to test the drugs, exercise equipment, and other countermeasures on actual astronauts living and working in zero gravity. Unfortunately, the results have been disappointing so far: astronauts who spend six months or more aboard the ISS still lose as much as 20 percent of their bone density by the time they return to Earth. But what’s bad news for the astronauts is good news for aspiring pillownauts, because it means that NASA is unlikely to cancel its bed rest studies anytime soon.