Why Bowie Knives are Called That 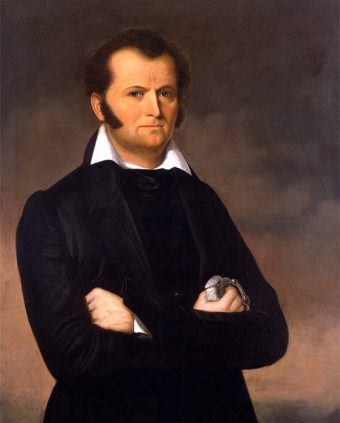 James Bowie is a man today known primarily for two things- his participation in the Battle of the Alamo and a large knife design that bears his name.  It’s impossible to separate fact from legend concerning an amazing amount of this American folk hero’s life, owing to Bowie leaving exceptionally little in the way of a paper trail documenting the events of his life and the fact that contemporary news articles about him are conflicting in their reports. That said, concerning the topic at hand today, we do definitively know how the style of knife now known as a “Bowie” knife got the name and how it was popularised.

It all started in 1826 when Bowie and his brother Rezin were staying in Alexandria, Louisiana. In the years leading up to this, the brothers operated an illegal foreign slave trade business in which they’d acquire foreign slaves from Jean Laffitte, who in turn had acquired these unfortunate individuals via capturing slave ships traveling through the Gulf of Mexico and the Caribbean. The brother’s profit from this slave smuggling scheme supposedly made them almost $65,000 (about $1.1 million today) in the two years they were involved in it before moving on to land speculation.

This brings us back to 1826 in which James was in need of a loan for a business deal- a loan that one Norris Wright, banker and sheriff in Rapides Parish, Louisiana, denied the frontiersman. It is widely reported that there was bad blood between the two owing to Bowie previously supporting Norris’ opponent in the election to become sheriff.

Later, Bowie and Wright seem to have gotten in a physical tussle, with Wright drawing his pistol and shooting at the unarmed Bowie. The bullet missed, but various accounts claimed Bowie then lunged at Norris and the two fought hand to hand. Ultimately Bowie had to be pulled off of Wright lest he kill him. But, again, at the risk of being a bit of a broken record, so much of Bowie’s history lacks any sort of definitive primary documents to back up these stories, and even first hand accounts, when available on some aspects of his life, are often contradictory. So whether this is exactly how it happened or not isn’t clear.  The real point here is that the pair most definitely didn’t like each other, partially leading to a more famous incident to come between the two, which gave us the name “Bowie knife”.

After the fight, Bowie was given what was essentially an overly thick butcher’s knife by his brother for protection. This was a knife Rezin would later claim in a letter that he had custom made, reportedly forged by Louisiana blacksmith Jesse Clifft.

At this point, you might be wondering why Bowie would want to carry that knife around and not a gun. It’s important to remember here that flintlock pistols of the age were notoriously unreliable for a variety of reasons, so a knife was sometimes preferred in relatively close quarter fighting. In fact, it was partially the unreliability of sidearms at the time that led to so many people wanting a Bowie knife, and later why its popularity diminished rapidly when more reliable hand guns, like the Colt pistol, became available to the masses.

In any event, in 1827, a friend of Bowie’s, Samuel L. Wells III, was set to duel a prominent Louisiana native known as Dr. Thomas H. Maddox. Both men were known to be mostly friendly with one another, but relations between their respective families were heated, with things eventually escalating to honour needing to be satisfied. Thus various duels were fought between the sides, including this one.

At the time, anti-dueling laws were in effect in the region, so the men arranged to shoot at each other on a small island in the middle of the Mississippi river, where they assumed state jurisdiction didn’t apply. Supporting each man was a contingent of friends and witnesses, some of whom had themselves previously dueled or otherwise come to blows with each other. Notable here is that one of them was the aforementioned enemy of Bowie’s, Norris Wright, who supported Maddox in the duel.

Taking place on September 19, 1827, the actual duel itself ended without any bloodshed; both Wells and Maddox missed their agreed upon number of shots. With that, the pair resolved to end the duel with a handshake, honour having been satisfied.

Up to this point, we can be reasonable confident the details are accurate from surviving news accounts. What happened next, however, is much less clear. While there are numerous newspaper accounts covering what would be called the “Sandbar Fight”, for legal and personal bias reasons, as well as possibly just notoriously inaccurate human memory, the participants of the event would later tell contradictory stories, and even impartial observers’ accounts differ.  So take the details on the next bit with a grain of salt- the important thing in terms of the topic at hand today, the Bowie knife, is simply the general event and Bowie’s use of the knife in it.

After the shots were fired, it seems the two men shook hands, but tempers flared between Wells’ contingent and Maddox’s and a fight broke out. In subsequent news accounts, it appears that Bowie was a central target for Maddox’s side’s men, with it later being speculated that this was because “they considered him the most dangerous man among their opposition.” However, it should also be noted that Bowie wasn’t exactly the type of man who endeared himself well to others for various reasons, including somewhat unscrupulous business practices- the bottom line being that Wright wasn’t the only one who loathed him. So they may have simply targeted Bowie particularly in the fight because they just really didn’t like him and thought this was a great opportunity to kill him without getting into too much trouble with the law.

Whatever the case, Judge R.A. Crane drew his pistol and shot at the frontiersman, hitting him in the hip, then later let loose a second shot that missed and killed an unarmed innocent bystander, Dr. Samuel Cuney. Bowie then got up and charged at the judge, at which point the judge used the gun to club Bowie on the head, knocking him down once again.

It was at this point that Wright took the opportunity of his hated foe lying on the ground to rush him with his cane sword, stabbing Bowie straight through the chest. With sword through his body, Bowie then grabbed at Norris and pulled him to the ground. Using the knife he was about to make famous world-wide, he violently disemboweled Wright.

His nemesis dead, it was then reported that Bowie once again joined the rest of the Wells’ party attacking the Maddox contingent. Using a whirlwind of knife slashes, he seriously wounded one Alfred Blanchard while his brother ineffectually shot and then stabbed Bowie some more.

During the estimated 90 second brawl, according to the physicians’ reports, Bowie sustained about a dozen serious wounds from various attacks, including having been shot and stabbed multiple times.

After the melee ended, the physicians present attended to the wounded, including Bowie and, miraculously, he survived.

Shortly thereafter, the “Sandbar Fight” was national news, and Bowie’s exploits in it became the stuff of legend. Most pertinent to the topic at hand, reports tended to focus on the “large butcher’s knife”, as it was described by one witness, Bowie used in the fight.

In the months following the brawl, blacksmiths across the country were being asked by hunters and other men to make them a knife “like the one Bowie used”- a general knife design that was good to passable in use in knife fighting, eating, chopping, and various uses in hunting, such as skinning and carving up animals. In fact, within a few years of the fight, even blacksmiths across the pond in England are known to have started producing similar blades known as “Bowie” knives.