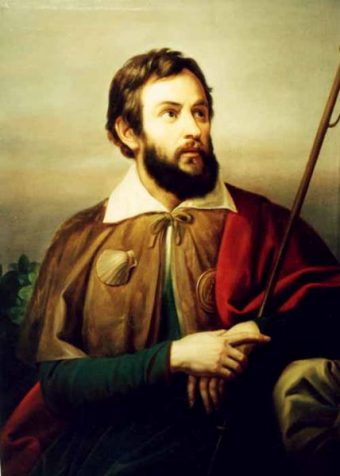 The myth that they dressed like this stems from a popular clothing style in England in the late 17th century, which carried over to 18th and 19th century artist depictions of Pilgrims. In fact, historical records of Pilgrims’ clothing, such as the passenger list of the Mayflower, wills, which included descriptions of clothing, and other such records, paint a very different picture than the late 17th century artists depicted. For starters, the Pilgrims didn’t wear buckled hats. They also didn’t wear buckles on their shoes or waists. Buckles were expensive and not in fashion at the time. They simply wore the much cheaper leather laces to tie up their shoes and hold up their pants. Buckles later became very popular in England for their expense and as a fashion statement. Those who were too poor to afford buckles wore laces, similar to the Pilgrims.

They also didn’t only wear black and white. The Pilgrim’s common garb was very colorful, as was the fashion at the time. They only wore predominately black and gray clothing on Sundays. The rest of the time, they wore heavily dyed clothing in many different colors. For one example, a Pilgrim by the name of Brewster left his clothing in his will to someone, which was described as such: “one blew clothe suit, green drawers, a vilolete clothe coat, black silk stockings, skyblew garters, red grograin suit, red waistcoat, tawny colored suit with silver buttons.”

Another myth surrounding the Pilgrims is that they would have probably died the first winter had the Native Americans not taught them various agricultural tips and tricks. In fact, the Pilgrims didn’t come so unprepared. They had a contract with various merchants who would come regularly to bring them supplies of food, clothing, etc for a term no less than seven years, while they established their colony. They were also well versed in hunting and farming techniques from Europe. When the Pilgrims left, they were quite well aware of the colonies that had tried to settle in America and failed; thus, they took appropriate steps to avoid that happening to them. 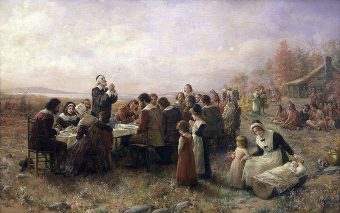 This all brings us to the most pervasive myth of all concerning the Pilgrims, that they celebrated the first Thanksgiving in America and invited the Native Americans to join in.

Around the time the Pilgrims came to America in 1620, it was common in England and many parts of Europe to frequently set aside days for giving thanks to God. In the New World, where life was harsh in the beginning, there were numerous opportunities to hold such days of thanks, for example: any time a particularly good crop would come in; anytime a drought would end; anytime a particularly harsh winter was survived; anytime a group managed to repel an attack by Native Americans; anytime a supply ship arrived safely from Europe; etc. This sort of practice remained fairly common up until around the time when Thanksgiving became a national holiday. Most of these celebrations bore little resemblance to what we think of as Thanksgiving. Indeed, even the particular Thanksgiving day that the Pilgrims celebrated sometime between September and early October of 1621 bore little resemblance to what is depicted now.

So who actually celebrated the first Thanksgiving in America? Nobody knows for sure owing to how common these days of thanks were in the New World. Three popular examples that are often referenced as the actual “firsts” and that pre-date the Pilgrims date include:

OK, so they weren’t the first, but they invited the Native Americans to their 1621 party right? In truth, from the only two first-hand passages that directly describe the event in question, a letter from Edward Winslow in December of 1621 and William Bradford’s passage in “Of Plymouth Plantation,” it would appear the party was held with no such invite. We do know the Native Americans stopped by at random times, probably attracted by all the noisy games like shooting contests, and some that stopped by were allowed to participate, but as for specifically thinking to invite them to take part in the event, there’s no such record nor any real indication of this.

So why is the Pilgrim Thanksgiving that happened in the autumn of 1621 often considered the first Thanksgiving and why do we have all these myths surrounding the 1621 event? This is largely thanks to Sarah Josepha Hale, author of the nursery rhyme “Mary Had a Little Lamb” and one of the most influential women in American history.

She was particularly enamored with this Pilgrim event that she had read about in a passage by William Bradford in Of Plymouth Plantation as well as the particular Thanksgiving tradition which was somewhat common in New England at the time. She tirelessly campaigned for over 20 years to have Thanksgiving become a national holiday with a set date and was ultimately successful.

Through her highly circulated editorials, she was largely responsible for much of why we view the Pilgrim’s 1621 Thanksgiving how we do and was also largely responsible for many of the traditions we now tend to attribute to that Thanksgiving. For example, things like the tradition of eating turkey, mashed potatoes, stuffing, cranberry sauce, and pumpkin pie on Thanksgiving were all popularized by her and it is extremely unlikely that the Pilgrims ate any of those things.