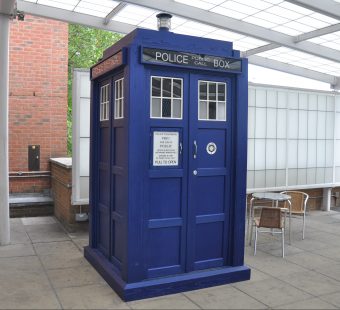 For over half a century, Doctor Who has proven itself to be one of the best known, most profitable, and most culturally significant series ever produced. Nevertheless, in the 1960s and 1970s the BBC decided to just up and delete pretty much every episode of the show from its archives. So thorough was this purge that, even today, there are still 97 episodes that there exists no known copy.

For anyone who’s managed to avoid the cultural behemoth that is Doctor Who, the show basically follows the adventures of the eponymous Doctor, a time travelling alien who solves various problems while looking and acting as obnoxiously British as possible. The show has been a staple of British pop culture almost from the moment it first aired in 1963. Of course, the first episode wasn’t exactly a ratings smash as its debut happened to coincide with news coverage of President Kennedy’s assassination, causing many Britons to miss it. This prompted the BBC to air it again a few days later. After this second airing, the show was a smash hit and has been popular in its various incarnations in Britain and beyond ever since.

Pertinent to this article is that Doctor Who isn’t and never has been a cult show with a small, but dedicated following; from basically the first episode it has proven to be a consistent performer. It was such a dependable hit that the BBC were reportedly disappointed in the late 1980s when individual episodes were only being viewed by an estimated five million people, despite being scheduled at the same time as the most popular soap in the country. Nevertheless, its massive popularity still couldn’t save it from what has come to be ominously known as “the purge”.

So why did the BBC choose to get rid of so many episodes of one of their most beloved and popular shows? Because, up until 1978, that was pretty much what they did with the majority of their broadcasts. The BBC, and most other networks, simply saw no value in keeping copies of much of anything.

Early in television’s history, the medium wasn’t viewed the same way it is today, with the BBC’s own archivist, Adam Lee, likening the mindset of people back then to that of theatre patrons in that “They saw it as something that was transmitted, went out live, and was finished”.

Even as the technology to record content became available, there was still little perceived value in keeping said recordings after the show had aired. As Lee went on to say,

Of course, the earliest videotape format, which was two-inch, was very difficult to use, so they used to do all these programmes as if they were live, but then if you had a complete disaster, it didn’t matter, you could go back and start again. So it was seen as a production tool. And I think a really important point to remember is that videotape was not seen as an archive medium, not as a long-term carrier for the television picture. What would happen was, after the programme was transmitted, then the tape would be re-used again.

Further, shows were rarely, if ever, rebroadcast and the tapes they were stored on were bulky and costly to store. Beyond that, as Lee mentioned, old tapes could be, and often were, re-used for future shows. As a result, it was simply more cost-effective to get rid of any old footage, regardless of what it was.

As an example of how shortsighted the BBC were about getting rid of any and all footage of anything they aired, during this period, they famously erased much of the footage they had of the Moon landing.  It wasn’t until 2012 that the BBC were able to recover much of their original coverage of said historical broadcast thanks to a copy made by an, at the time, 12 year old viewer who figured coverage of man’s first steps on a celestial body other than Earth would probably end up being historically significant.

Beyond these issues, the BBC had to contend with the British actor’s union, Equity. As is so often the case when technology causes a radical shift in the entertainment industry, when pre-recording television broadcasts first became popular, it disrupted the way business was done before- in this case to the potential detriment of the actors involved.

You see, before this, if the BBC wanted to air a particular episode of something again, they’d have to re-hire the actors to perform it live, much like in a play. When recording technology became more sophisticated, Equity fought hard to limit how recordings of shows could be used, often encouraging actors to include clauses in their contracts preventing a given show they appeared in from being rebroadcast more than a handful of times.

In an age before selling copies to consumers was feasible, after this number of broadcasts was reached, the value of the footage to the network effectively became nil, giving broadcasters little financial reason to keep it.  Even when they did have the rights to re-broadcast, with the transition to colour recordings, even the formerly most valuable of black and white shows were likewise deemed worthless.

The whole situation wasn’t helped by the fact that there was a miscommunication between the BBC Film Library (which is responsible for maintaining and curating the BBC’s impressive and extensive library of content) and the BBC itself. Essentially, both entities more or less assumed the other was keeping copies of things that were deemed valuable, at least for a while, and as a result, neither thought anything of just deleting content when necessary without any real oversight. In its earliest days, the BBC Film Library was also quite particular when it came to what it would accept, reportedly only deeming anything filmed on, well, film to be worth saving, which was a problem considering most of the BBC’s recordings at the time were made on tapes.

In addition to wiping the master tapes of countless shows, news broadcasts, and films, film reels containing items that were shipped overseas for international broadcast (it was common practise to copy the tapes to film as it was cheaper to ship and a more universal format) were likewise often discarded if they were returned.

Amongst the many casualties of these purges that continued into the late 1970s were most of the Doctor Who episodes produced between 1963 and the early 1970s.

This fact was only revealed in 1978 thanks to famed music producer Ian Levine.  A huge fan of Doctor Who as a child, Levine managed to get Equity and the BBC to agree to let him purchase copies of the old episodes. Unfortunately, when he showed up to the BBC Film Library to collect, he found most of the episodes gone, and among what remained, some of them were quite literally on the junk heap, ready to be thrown out.

Needless to say, he was not happy with the situation and was soon able to convince BBC execs to cease the practice of junking episodes of Doctor Who. They were also particularly intrigued by the fact that this one individual was willing to pay so much money for copies of an old show, and had been contemplating the potential of perhaps selling copies of the show to other people via the newly emerging market of home videocassette recordings.

At the same time, the BBC Film Library decided to change their rules and allow for the storage of tapes of shows, not just film.

When the dust settled and an extensive search was completed, it was found that every master tape copy of the first 253 episodes of Doctor Who had been wiped or thrown away and there were a full 152 episodes where there existed no film copy in any of the BBC’s archives… But that was not the end of it.

As you may recall, we said at the beginning of all this that there are only 97 episodes of Doctor Who missing today. This is largely thanks to the efforts of Levine and various fans of the show who’ve spent a few decades tracking down lost episodes. These searches have taken said individuals far and wide, from Nigeria to Australia, where copies were found hidden in various TV network archives that still had film copies the BBC had sent them many years before.

Beyond this, some of the more unusual places episodes have been found include a garbage dump, a yard sale in New Zealand, and even the basement of a Mormon church- the building had once been owned by the BBC and inexplicably had two episodes of season three- episode 5 and 10 of that season- just lying around. Numerous episodes have also been found to be in the hands of private collectors who acquired them through various largely unknown means. Those collectors who’ve chosen to come forwarded have subsequently donated or sold their copies to the BBC, in the latter case sometimes for exorbitant amounts.

Where the BBC hasn’t been able to recover entire episodes, they’ve been able to cobble together workable alternatives to the real thing in a few cases. For instance, enterprising young fans of the Doctor before the days of being able to record the visuals of the episodes from home did manage to record the audio, and some of these recordings survived the decades since. Where audio has been found, the BBC, and in some cases the fans, have filled in the missing footage with animations synced to the original audio.

They’ve also managed to re-create at least parts of otherwise lost episodes from flashbacks in other episodes, documentaries and, most humorously, national censor boards who cut clips from episodes in accordance with their respective censorship laws, but kept the removed footage- meaning this “objectionable” material only survived because of their efforts to make sure it didn’t see the light of day.

Despite continued efforts by certain individuals, and even businesses looking to turn a profit on discovering lost episodes, there are still, as noted, 97 episodes of Doctor Who for which there are no known copies, leaving diehard fans with the ultimate of first world problems- inability to buy a complete box set of their favourite show.

And if you’re wondering, today things are done a little differently at the BBC.  Archivist Adam Lee explains,

At the moment, everything is recorded and everything is kept for a minimum of five years. But we do exercise a selection policy on that. We keep what you would expect us to keep, so all the drama is kept, all the entertainment is kept, all the very high value, expensive programmes to make. We keep our news, we keep all the current affairs. The areas where we tend to be more selective would be, for example, in a long-running quiz show, where it’s really important to have examples of that, but we wouldn’t necessarily keep them all forever. Because when we’re talking about keeping something here, we’re saying we’re going to keep it forever and that’s a big overhead to have.

.. Before we dispose of any material, any TV material, it’s always offered to the British Film Institute and they take a reasonable selection of material they want. We even offer it to them when we’ve transferred it to a new format and we ask them if they want to have the original formats too. And then on the radio side, if we’re disposing of any material from the Sound Archive, then that’s offered to the British Library Sound Archive.